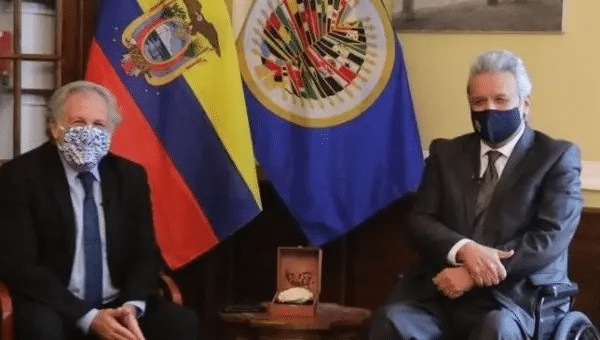 The OAS & Ecuador’s neoliberal president are looking to suspend elections so as to cling on to power and stop the coming victory of the Correísta left. | Photo: Twitter/@OVargas52

On February 7, presidential and legislative elections (137 assembly members) will be held in Ecuador, and the candidate best positioned to win is Andres Arauz, candidate for the coalition Union for Hope (UNES). Arauz, who represents correísmo, is the heir of a citizen revolution which the current government has tried to annihilate and outlaw electorally.

Andres Arauz has 37 percent of voting intention in the most recent polls, compared to 24 percent of the banker Guillermo Lasso, his main competitor, who seeks to banish once and for all the failed model of 21st Century socialism. In the elections, it is necessary to reach 40 percent of the votes and 10 points of difference from the second candidate to win in the first round, and if not, there will be a second round on April 11.

Lenin Moreno is the third actor in dispute. The current president has just visited Washington, where he met with one of the masterminds of the coup d’état in Bolivia, Luis Almagro, with the former director of the White House Security Council and current president of the Inter-American Development Bank (IDB), the Cuban-American Mauricio Claver Carone, and with the International Monetary Fund, with whom Ecuador contracted a debt of several billion dollars during Moreno’s presidency.

Moreno is desperate and at the same time fearful of an eventual return of Correism to the government, since he could be subject to numerous judicial processes for his actions, and has already arranged his departure from the country, with Switzerland as his destination, a country where he has bank accounts as a result of corruption and delivery of the country’s resources to foreign capital and international financial organizations.

One of his main collaborators, former Minister María Paula Romo, also negotiated with the U.S. Embassy her refuge in Washington, following the steps of Richard Martínez, former Minister of Economy, who was rewarded last November with the Vice Presidency of the IDB.

At the same time, and as it happened in Bolivia, the Ecuadorian right is beginning to talk about an alleged electoral fraud. For this purpose, they have created an Observatory for the electoral contro, with Mario Pazmiño, former chief of the National Police, linked to the U.S. intelligence services, in charge. The National Democratic Institute (NDI) and the International Republican Institute (IRI) of the United States have joined this operation.

The NDI seems to be recruiting Ecuadorian citizens to participate in the electoral transparency programs, led by Julian Charles Quibell, a U.S. official who has worked at the NDI for 18 years and is considered an elections guru in Latin America.

Quibell began his career at NDI in 2002, advising the network of right-wing political parties in Bolivia for two years, to then arrive at the NDI office in Mexico between 2004 and 2012, from where he jumped to the regional office of the institute in Managua, with the mission of organizing actions against the Sandinista government, among them the diploma in leadership and public management, financed by USAID, a space designed to train and finance emerging opposition leaders.

The U.S. official linked to the intelligence services had to abruptly leave Nicaragua for Mexico in January 2019, when he was about to be arrested by local authorities based on a series of allegations against him.

In July 2020 he was relocated to the Ecuador office, where he was also entrusted with the attention to Bolivia’s programs, coincidentally two nations involved in electoral processes and with possibilities of victory of leftist forces.

NDI is currently executing a project in Ecuador financed with 2 million dollars from USAID, with the objective of creating conditions to guarantee the transparency and security of the electoral process, with some control over the process and the digital platforms destined to oversee it.

Among its main activities, it supports sectors of the Ecuadorian right wing in a project in whose execution the government of Lenin Moreno is directly involved, through the Foreign Ministry and the National Electoral Council (CNE).

As if that were not enough, one of Quibell’s subordinates is the Ecuadorian-Brazilian citizen Juliana Ferreira Sevilla, who previously worked in the Foreign Ministry and has links with the CNE, having even suggested holding the elections virtually.

But the idea in which converge today both Lenin, as well as his Minister of Defense, responsible for the repression in October 2019 and alphil of the United States, on the one hand, and Almagro and the NDI, on the other, is to suspend the elections before the possible victory in the first round of Arauz, as it happened with that of Lucho Arce in Bolivia.