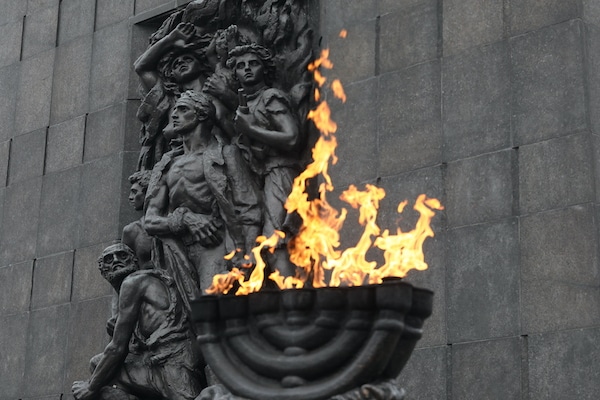 Today in the West, while hypocritical empty crocodile tears are wept over the Nazis’ victims, real history continues to be suppressed, denied and buried beneath mountains of lies.

The anniversary of the Liberation of Auschwitz on January 27, 1945 and Holocaust Remembrance Day every year have been hijacked. They have become bizarre photographic negatives of the horrors they were meant to commemorate and manipulated to insult the millions of victims and the heroic warriors who gave their lives to end such horrors

For who ended the Holocaust? Who actually liberated and shut down every one of the six great Nazi industrialized extermination camp killing centers of death at Auschwitz-Birkenau, Majdanek, Sobibor, Chelmno, Treblinka and Belzec? Why the Soviet Red Army did of course.

They did not just stroll into camps at the end of the war where the cowardly Nazi SS ubermenschen had just fled for their lives to forever after fearfully claim they were “just following orders.” No. From October 1944 when astonished and revolted Red Army soldiers and officers first uncovered the horrors of Majdanek in central Poland to the fierce battle that still cost many lives in the freeing of Auschwitz-Birkenau itself on January 27, 1945, the war was still raging, the Nazi war machine was still fiercely functioning and previous innocent blood had to paid for every yard that was freed.

Yet today, and for many years now, we have entered a world of the Great Moral Inversion. The thousands of precious lives that the extraordinarily dedicated medical staff of Marshal Ivan Konev’s First Ukrainian Front of the Red Army saved at Auschwitz alone are forgotten. Western intellectuals now proclaim a contemptible moral equivalence between those who died fighting to rescue and save, and those who killed them and all the genocide victims.

The scale of this moral inversion–this contemptible behavior that the great Sigmund Freud–whose own sisters and their families died in the Holocaust–identified as “projection,” becomes more huge and disgusting every year. We now know that in addition to the six million Jewish victims of the Nazi genocide, at least 20 million innocent Russian civilians were deliberately exterminated too in 200 smaller camps across the occupied East set up and run for that very purpose. Where are the ceremonies and heartfelt tears in the West for them?

The very commander of the heroic unit that liberated Auschwitz, the 1085th ‘Tarnopol’ Rifle Regiment of Major General Petr Zubov’s 322nd Division, was of Ukrainian Jewish origin himself, Lieutenant Colonel Anatoly Shapiro lived to the age of 92 and eventually died on Long Island in the United States. To the end of his days, he was proud of his lifetime service in the Red Army: He spent the last years of his life combatting the Big Lie of Holocaust denial by neo-Nazis.

By contrast, today in the West, while hypocritical empty crocodile tears are wept over the Nazis’ victims, real history continues to be suppressed, denied and buried beneath mountains of lies. And not coincidentally, new Nazi slugs arise from the garbage piles from Ukraine to Washington. Starting with the 2014 U.S. and European Union-backed coup that murderously toppled the democratically elected government of President Viktor Yanukovych led to the open, defiant emergence of open neo-Nazi militias and forces that continue to weld disproportionate power in Ukraine, backed by the U.S. government to this day.

New U.S. President Joe Biden has already approved the appointment of one of the open architects and champions of the infamous coup, neocon Victoria Newland, then Assistant Secretary of State for European and Eurasian Affairs, as the new Undersecretary of State for Political Affairs–the position that basically tells Secretary of State Anthony Blinken what to think. From Kiev to Moscow, Nuland has been remembered unforgettably as “The Cookie Lady” who openly handed out sweet treats on ßthe streets of Kiev to encourage the rioters who were waging revolution and war on their democratically elected government.

But what goes around comes around. Blowback of course is now happening all across the United States. The mob that blundered into the U.S. Capitol, more by luck and permission than by deliberate armed force, on January 6 was mixed with individuals who were idealistic and admirable as well as contemptible clowns. Several white supremacists among them were proudly photographed in Camp Auschwitz T-shirts. One can only imagine how such vile slugs would scream in terror if confronted with any of Marshal Konev’s brave real warriors.

The 2014 coup is now called with masterly irony in Wikipedia “The Revolution of Dignity.” That is a Big Lie even Josef Goebbels would have envied.

Scores of millions of decent, suffering working class Americans who have been crucified on the crazed policies of global liberalism, open borders and hard drugs on demand for the past half century are now being slandered and conflated with a handful of jerks and agent provocateurs. The new fascism across the West justifies itself by suppressing traditional freedoms and speech by sticking on the Innocent, labels taken from the Guilty.

According to Lev Golinkin, writing on the New York Forward news web site, well over a thousand statues to Nazi war criminals have been erected from the United States to Ukraine over the past 20 years.

“Wherever you see statues of Nazi collaborators, you’ll also find thousands of torch-carrying men, rallying, organizing, drawing inspiration for action by celebrating collaborators of the past,” Golinkin writes,

In Ukraine, where 25 percent of the Jews killed in the Holocaust died: “In 2016, a major Kyiv boulevard was renamed after [Nazi collaborator Stepan] Bandera. The renaming is particularly obscene since the street leads to Babi Yar, the ravine where Nazis, aided by Ukrainian collaborators, exterminated 33,771 Jews in two days, in one of the largest single massacres of the Holocaust,” Golinkin continued.

Yet of course, the Biden administration has made clear it is preparing to send even more lethal weapons to arm the ferociously Russian-hating regime which perpetrates such despicable measures.

This obscene farce unfolds now every year, but it is not even a constant: It is getting worse than ever at an exponentially accelerating rate of intensity. One now has to turn to calculus to grasp it.

It is surely more than an ordinary coincidence that on Holocaust Memorial Day this year, the Bulletin of the Atomic Scientists announced its latest setting of its fearful Doomsday Clock assessing the possible imminence of nuclear war.

The experts who set the clock clearly welcomed Joe Biden replacing Donald Trump as U.S. president, a predictable liberal bigotry. Yet they remained clear-eyed enough, scientific enough to recognize and publicly acknowledge that this would be no improvement at all. The setting of the symbolic clock remains at only 100 seconds to midnight, the closest setting to nuclear war in its 74 year history.

It should have been moved much closer–perhaps to only 75 seconds to catastrophe: For the intensifying phenomena on Western Holocaust denial and projection: The obsession with backing real live 21st century Nazis in Ukraine against the descendants of the very people who died to save the world from them, is now clearly linked to the blowback of emerging white supremacy and leftist anti-Russian conspiracy theories alike in the United States.

Stupid and wicked policies pursued across Eastern Europe have driven U.S. policymakers literally mad–or perhaps just even more insane–and that mania has poisoned and destroyed the fading embers of democratic due process and fair play in the United States itself. The two theaters of madness generating more wickedness are inextricably linked. They cannot be separated.

To truly be a great president and bring the peace at home he claims to cherish, President Biden needs to end at last the disastrous policies in Ukraine and elsewhere that he supported as vice president under Barack Obama. But that would be a new idea–and the new president appears to be incapable of ever accepting such things. Then the obscenity of Holocaust Remembrance Hypocrisy will continue–until its madness brings Destruction upon all.

Martin SIEFF, during his 24 years as a senior foreign correspondent for The Washington Times and United Press International, he reported from more than 70 nations and covered 12 wars. He has specialized in U.S. and global economic issues.
Monthly Review does not necessarily adhere to all of the views conveyed in articles republished at MR Online. Our goal is to share a variety of left perspectives that we think our readers will find interesting or useful. —Eds.