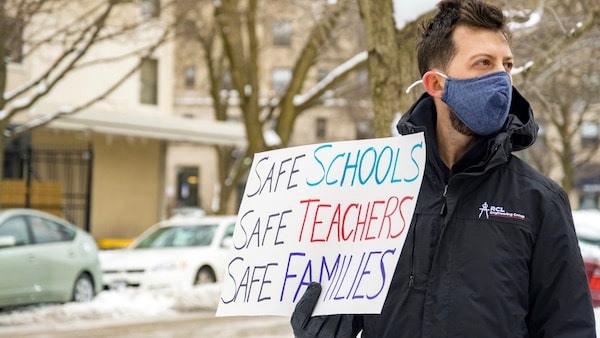 After failure of a second round of negotiations on school reopenings with educators, the city administration of Chicago, United States, has threatened to impose a unilateral plan that will lockout thousands of teachers and students who would prefer remote learning. On February 5, just hours after it presented the Chicago Teachers Union (CTU) a widely criticized plan, the Chicago Public Schools (CPS) board announced resuming in-person classes on Monday.

Announcing the decision, the CPS has stated that educators and staff for preschool and cluster groupings are expected to start reporting on Monday, January 8, while students for these divisions will begin classes on Tuesday. Those refusing to come back will be deemed to be absent without leave, while remote access to schooling material will be denied from Monday evening.

This decision comes despite strong opposition from both educators and parents, concerned about the risks of COVID-19 spread through in-person classes. The CPS and CTU have been in talks about the plan to resume in-person classes from kindergarten to eighth grade. Teachers have raised strong concerns about the complete lack of transparency by the city administration in administering federal health and safety protocols for the schools.

The teachers have been demanding implementation of a federal health metric that will shut down schools during outbreaks, expanding remote learning facilities, and ensuring that no student, teacher or staff who live vulnerable individuals are locked out of the process. They have also demanded full consultation and transparency on safety standards, inclusion of parents and staff in health safety committees, and a phased transition to in-person instruction, among other things.

Speaking to Breakthrough News, union members have pointed out the inaccuracies in how both the city administration and the mainstream news channels have reported on the safety of the schools. “Teachers are sending in photos, finding mice and rodents, finding piles of dust, noting that the cleaning that was supposed to take place once the pandemic started never happened,” said Diana Muhammad, a teacher and an associate union delegate with CTU.

On February 4, Thursday, after failure of a latest marathon round of talks with the CPS, the union sent out an open letter to parents of thousands of children enrolled in the CPS, countering claims of the authorities. The Chicago school district is the third-largest school system in the US, enrolling over 355,000 students in 642 schools.

After the failure of talks, Lightfoot and CPS CEO Janice Jackson blamed the CTU for the breakdown of talks. Lightfoot stated during the negotiations that the union took a “series of steps backward.” Both Jackson and Lightfoot also accused the union of making decisions that affect students with special needs and those from families of color. The CTU countered that mayor Lori Lightfoot, who was involved in the discussion, “mocked” the teachers for asking to take into account the “beyond the classroom” needs of educators and families, depending on the school system.

In the open letter, the CTU stated that they “cannot return to in-person instruction until we have made more progress with the district on CDC-based health metrics, allowing educators with medically vulnerable family members to continue to teach remotely, and addressing real equity needs for the vast majority of our students–particularly Black and Latinx students who continue to learn remotely.”

Late on Thursday, the CTU had sent authorities a counter proposal for school reopenings. In return, on Friday, the CPS sent a new proposal which they stated was their “last, best and final offer”, but was widely rejected by the union. CTU president Jesse Sharkey stated that the offer was essentially a “threat” to exclude students from schooling.

Sharkey pointed out that the offer refuses the remote teaching option to 75 percent of teachers with household members at high-risk for COVID-19, and only assures to halt in-person classes with 50% or 200 school buildings report outbreaks at the same time. He also pointed out that it “will not make any improvement in remote learning, despite four out of five students remaining remote.”

In his statement, Sharkey added that the union was “deeply disappointed that the mayor has chosen to stop negotiating and instead move to lock out educators and shut down schools rather than work out our differences.” Teachers across Chicago echoed these sentiments.

Linda Perales, another teacher speaking to Breakthrough News, stated that she has been locked out of remote-learning facilities since January 12, which has become quite common in CPS. “The plan that they currently have in place is not equitable for our Black and Brown families that have been hardest hit by this pandemic,” said Perales.

In the meanwhile, pressure grows on Lightfoot as dozens of state legislators in Illinois have called on for her to make compromises with the teachers. In a letter addressed to the mayor, the lawmakers have asked Lightfoot to accept some of the crucial demands put forward by the teachers. A similar letter in support of the teachers was sent to the mayor by members of the city council in January.

School reopenings have become one of the most contentious issues between city governments, teachers and working class families across the US. In Chicago, teachers have accused the city administration of unilaterally making decisions on reopening schools without consultation with educators, staff or even families of the enrolled students.