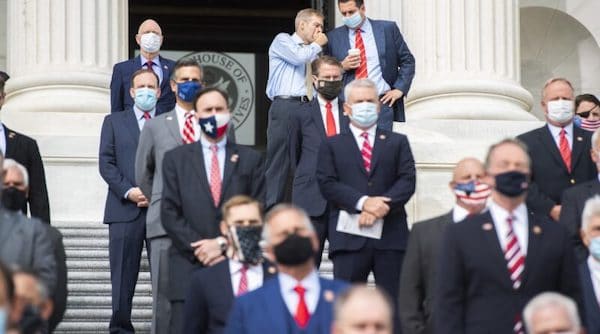 Today, Congressman Waltz introduced the bipartisan Banning Operations and Leases with Illegitimate Authoritarian Regime Act, or the BOLIVAR Act, that will prohibit government contracting with persons that have business operations with the Maduro regime. pic.twitter.com/sdw2RO0OhY 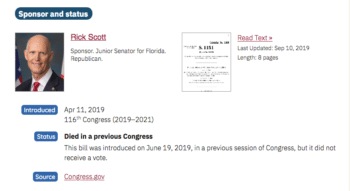 In an act of cynicism, the creators and promoters of the law tendentiously and symbolically established the contradictory short title of “BOLIVAR Act”, its acronym in English.

The immediate precedent dates back to 2019, when Senator Rick Scott, obsessive opponent of the Venezuelan Government since his years as Governor of Florida, sponsored together with Marco Rubio and Waltz himself the Venezuelan Restriction on Contracting Act, which at that time did not even pass to a vote in the plenary.

It should be noted that the bill reached the Senate Committee on Homeland Security and Governmental Affairs, where the now Vice President Kamala Harris was a member, and that through a report they justified that legislation.

Scott is one of the most active operators in the anti-Venezuelan lobby, a character who has been in charge of pressuring the U.S. Government to intensify the unilateral coercive measures against Venezuela, accompanied by Rubio and the fugitive from national justice Carlos Vecchio.

He rejoices about it in his web portal rickscott.senate. gov, when he highlights his impressions after the signing of the Executive Order that imposed the economic embargo on Venezuela in August 2019: “I have been asking the [then] [Trump] Administration to use all available options, including an embargo,” commented the Republican senator referring to the fact that months earlier, during that same year, he urged Mike Pompeo and Steven Mnuchin, the then Secretaries of State and Treasury respectively, the implementation of stricter “sanctions” against Cuba, Venezuela and their international allies.

The focus of the new mutation of the title in the bill (“Contracting Restriction”) alludes to another operation of the well-known plan to make impossible the financial transactions of the Venezuelan State with any entity, subject or company prominent in international trade. According to the document, the purpose is to prohibit the head of the U.S. Government from contracting persons who have commercial operations with the “Maduro regime”.

Who are the promoters of the proposal?

Most of the U.S. congressmen in the House of Representatives who are pushing the legislative proposal against Bolivarian Venezuela belong to the representation of Florida districts.

Although on this occasion Rick Scott does not appear in the list because he is a senator, it is important to mention part of his dossier as the original promoter of the iniquitous project.

Scott is implicated in the largest Medicare fraud in the United States, when he was CEO of the health care company Columbia/Hospital Corporation of America (HCA). That controversial matter gravitated to the FBI investigation, later made public in 1997, in which the company in question admitted to felony billing and fraudulent practices three years later. Most of these events occurred under Scott’s leadership.

According to Sun Sentinel columnist Randy Schultz, Columbia/HCA gave kickbacks to doctors to refer patients to make them look sicker than they were, so Medicare would pay more.

With that attitude of false concern for Venezuela and a questionable track record, Scott used the Fifth Amendment (part of the U.S. Bill of Rights that guarantees certain protections to a person accused of a crime or involved in a legal proceeding) 75 times for this case and walked away from the company with $300 million in stock and a $5.1 million severance package. 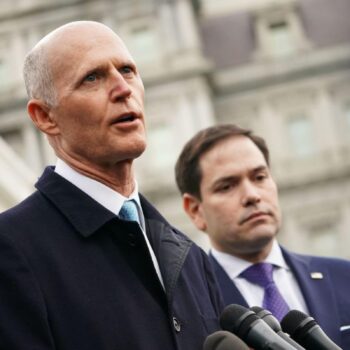 Now, who is Michael Waltz?

Waltz’s discursive and repetitive line on Venezuela is no surprise, nor is the list of co-sponsors joining him on the bill. Congressmen such as Debbie Schultz and Mario Diaz-Balart are a case in point, as they put forward the idea of labeling Venezuela as a terrorist state.

Each one of the members of that clique is in sync with the interests of the anti-Venezuelan lobby in Miami, without half measures.

Some implications of the Bolivar Act 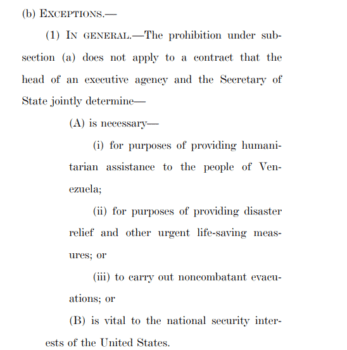 The United States has a history of using “humanitarian aid” as a weapon of war against the Bolivarian Republic and unscrupulous financing of the Venezuelan opposition (Photo: Image capture).

The new U.S. legislative project takes the character of “bipartisan”, while Congressman Waltz commented that said instrument is the road map that the rest of the countries in the world should take as an example. In addition, he made the worn-out call that the United States must use all means to eliminate any financing mechanism of the “Maduro regime”.

Within the pantomime in which they wrap the subject of “sanctions”, postulating some supposed exceptions that in the end are not taken into account or are an ordinary play on words to the legal sound of the congressmen, the bill adds a couple of points, little specified, which refer to the exception on the shipments of “humanitarian aid”, of course, under the conditions and schemes that the U.S. administration considers.

Under the guise of “humanitarian aid”, the U.S. Government through agencies such as the National Endowment for Democracy (NED) and the United States Agency for International Development (USAID) have channeled funding to the Venezuelan anti-Chávez leadership in order to stimulate the strategy of “regime change” in Venezuela.

A fraction of that amount was transferred to Julio Borges, Carlos Vecchio and Lilian Tintori in September/2019, as announced by Mark Green, director of the agency pic.twitter.com/mb0iMWTFQG

The #USAID reported that it has delivered $654 million to the opposition #Venezuela government to overthrow it. 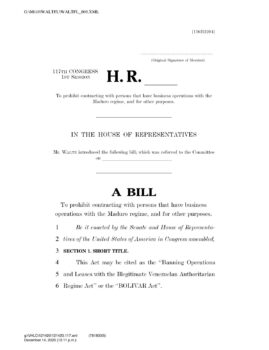 The “BOLIVAR Act” intends to deepen the blockade against Venezuela (Photo: Archive)

On the other hand, and in light of what characterizes that proposed law, when mention is made of “business operations,” it refers to engaging in commerce in any form, including the acquisition, development, maintenance, possession, sale, lease, or operation of equipment, facilities, personnel, products, services, personal property, real property, or any other apparatus of business or commerce.

Based on this, it is evident, firstly, that the oil and service companies in that sector at an international level should cease their operations with Venezuela or should triangulate in order to avoid the attacks of the US blockade.

But not only that: the companies must choose whether to do business with Venezuela or with the oil companies of the United States, taking into consideration both monetary and sanction retaliations. However, what is striking about this description is its breadth, since it covers any commercial dynamics, including the acquisition of drugs, medical supplies or even vaccines. Not to mention the food sector. And the same premise applies: companies must decide between doing business with the United States or with the Venezuelan State.

Although in practice the U.S. Government has prevented imports in the food and pharmaceutical sectors by the Venezuelan State through executive orders, through the “BOLIVAR Act” it intends to make this imprint official on the legislative paper, a trademark of the blockade against Venezuela and key to the deepening of the economic and social crisis that the country is experiencing in an induced manner.

The U.S. political class continues to apply its economic and financial gunboat diplomacy disguised as progressive humanitarianism. These congressmen, unified Democrats and Republicans under the same anti-Venezuelan criteria, continue to move in this macabre and pestilent enjoyment.