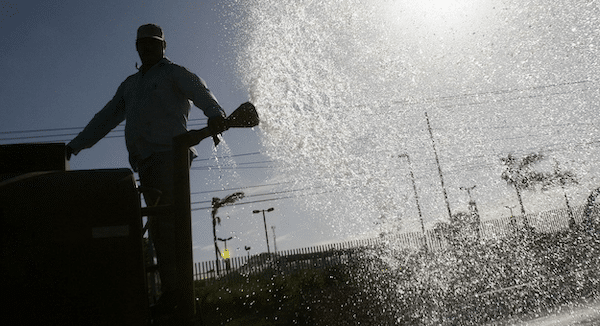 According to the United Nations, water use has increased sixfold over the past century and is rising by about 1 per cent a year. For stock market traders in the United States, water futures offer an opportunity to lock-in water prices, but human rights campaigners say, “it is a serious mistake to consider water a commodity”. (AP/Esteban Felix)

The volatility of stock market trading has made global headlines over the past couple of weeks thanks to the frenzy surrounding a video games retailer. It’s a dizzying yarn of Reddit vigilantes taking coordinated action to bankrupt hedge funds that were short selling GameStop stocks, resulting in rollercoaster share prices, trading restrictions and U.S. Congressional hearings. It provides a stark illustration of the absurdity of the stock market, and yet, late last year, the state of California decided to allow water to become a tradable commodity.

Futures trading allows speculators to bet on the future price of a financial instrument or commodity, like oil or gold, and since December 2020 the Chicago Mercantile Exchange (CME) has made it possible to trade in contracts for California’s water market.

Reeling from the impact of extreme weather events and climate change-related disasters, as America’s richest state, California has been propelled to look for ways to lock-in future water prices. Although water trading is not new (in China, for example, the government encourages cities to trade water, with the quantity and quality specified in a contract), the CME has made water a financial product, and other countries are watching closely.

As farmers, municipalities, and hedge funds become equal players on the market, market watchers are telling investors “one thing is for certain, in the commodities play for 2021, water should be on your list.”

The human rights community isn’t quite so enthusiastic.

“I think it is a serious mistake to consider water as a commodity,” warns the United Nations’ Special Rapporteur on the right to safe drinking water and sanitation, Pedro Arrojo-Agudo.

In a statement made days after the exchange was launched, the environmentalist, physicist, economics professor, and former Spanish member of parliament wrote that “such a futures market could also lure speculators such as hedge funds and banks to bet on prices, repeating the speculative bubble of the food market in 2008,” when global prices of wheat, rice, and other cereals hit a 30-year-high, sparking widespread protests and unrest.

In particular, Arrojo-Agudo fears that large agricultural and industrial players will gobble up the world’s limited water resources at the expense of small-scale farmers. According to the Food and Agriculture Organization of the United Nations (FAO), over 1.2 billion people live in agricultural areas severely affected by water shortages or scarcity.

The UN advocates establishing water rights and quotas, and Arrojo-Agudo tells Equal Times that a market-based approach is unsuitable for distributing the most fundamental of human necessities:

In Spanish there is a saying: ‘You don’t ask an elm tree for pears.’ In this case it is inconsistent to ask the market to properly manage water as a human right.

When water is treated as a commodity, there is nothing to distinguish its use in a swimming pool and its use for basic sanitation. But in a human rights framework, the latter takes priority. “The logic imposed by the financialization of life–which is often presented as unavoidable–corresponds to the idea not only that everything can be bought and sold, but that everything has to be bought and sold,” he says.

In California, knowing that water resources will become increasingly scarce but that municipalities will desperately need to supply water to residents, financial corporations could buy up large quantities of water and inflate prices, as has been the case in the housing market.

Financialized at the source

Since the 1980s, various global governance structures and aid donors have actively recruited the finance sector in the management and ownership of public services. Financial and material products became increasingly entangled as institutions like the World Bank and the International Monetary Fund (IMF) promoted the idea that basic services like water infrastructure could be improved and made more efficient with the involvement of transnational actors.

One of the most significant examples of water privatization took place in Chile, where General Pinochet’s 1981 Water Code “established a model for water management that strengthened private water rights, adopted a market-based allocation system and reduced state oversight,” according to MIT Urban Planning PhD candidate Daniel Gallagher writing in the Guardian.

This opened the door to the privatization of water and sanitation services elsewhere, particularly throughout the Global South, as part of the neoliberal reforms pushed by the World Bank and IMF. These reforms promoted infrastructure projects as ideal vehicles for investors and pension funds. This is what experts call the financialization of nature–employing natural resources for the accumulation of capital.

Inviting finance into water distribution often starts with privatizing infrastructure. Various countries have experimented with different ownership models–the most common being public-private partnerships, although some countries (such as Chile and the United Kingdom) have opted for full privatization. Either way, the result is usually huge profits for investors and increased water tariffs for citizens.

One of the most notorious examples took place in 2003, in the Tanzanian capital of Dar es Salaam, where aid donors put huge pressure on the government to transfer responsibility for the city’s water system to City Water, a joint venture between British, German, and Tanzanian firms, backed by a US$145 million loan from the World Bank, the African Development Bank and the European Investment Bank.

There was no public consultation and users faced soaring water costs, frequent disconnections, and no discernible improvement to water services. The government terminated the contract early in May 2005 and City Water was ordered to pay millions in compensation following an international tribunal.

In Europe, the 2000 Water Framework Directive states: “Water is not a commercial product like any other but, rather, a heritage which must be protected, defended, and treated as such.” And yet the directive does not prevent commercial actors from having a say in water provision. This political ambiguity created the space for the European Commission to take part in privatization drives in response to the 2008 financial crisis–a move that was resisted by grassroots and civil society organizations like the European Citizens Initiative, Right2Water.

Slowly, we are beginning to see a reversal of the privatization trend. In a 2014 report, the Transnational Institute (TNI) noted that between 2000 and 2014, there were 180 cases in 35 countries around the world of municipalities taking back public control of water supply and sanitation services, including the cities of Berlin, Budapest, and Paris. In most cases, contracts with private providers had proved so unsustainable that municipalities cancelled them, even if it meant paying out compensation.

In 2014, Greek civil society successfully thwarted the privatization of the water supply in Athens and Thessaloniki. TNI notes that this also happened in France, “the country with the longest history of water privatization and home to the leading water multinationals” like Veolia and Suez, which have been at the forefront of exporting the privatization model around the world.

How to manage scarcity for the common good

Lack of access to water can become a national security concern, says Tom Middendorp, chairperson of the International Military Council on Climate and Security in The Hague. “Water is becoming ‘blue gold’, and it worries me when we look at it from a security angle,” he told attendees of the 2020 European Forum Alpbach, an interdisciplinary platform for science, politics, business and culture, emphasizing that, whatever the provision on the ground looks like, it is governments’ responsibility to prevent scarcity.

However, the destabilization of infrastructure under financialized systems affects rich and poor countries alike. “All water users must be at the table,” Nigeria-based human rights activist Chitra Nagarajan told the same panel.

Some people have always experienced water insecurity, [but] this is not inevitable.

When water is traded as a product, there is the added concern that speculators who have bet on scarcity will have a vested interest in limiting access to water to keep prices high. “Water is a very profitable market, because people pay for it every month,” says Pablo Sánchez Centellas of the European Federation of Public Service Unions (EPSU). The Spanish trade unionist, who coordinated the Right2Water initiative, says:

That’s why when [companies] try to commercialise something like water, there is a rejection. These companies want to make money but when there is an issue, when there is an actual problem, they just run away and leave the public authorities to deal with it. You cannot just be there when there is money to be made.

In the European Union, the Right2Water initiative led the European Parliament to adopt a 2015 resolution which criticized “the [European] Commission’s alleged neutrality regarding water ownership and management in contradiction with the privatization programs imposed on some Member States” and called on the Commission “to review the governance of water policy and to re-establish it on the basis of active participation.”

Asked whether European water multinationals, increasingly held accountable and rejected on European soil, will flock to the U.S. and other potentially financialized markets, Sánchez Centellas says this is already happening. The French waste and water multinational Veolia, for example, was brought into the American city of Flint, Michigan to advise it on using a local river full of industrial toxins as a source of drinking water.

Switching Flint’s water supply led to one of the worst public health disasters in modern American history, and Veolia has since been ensnared in a years-long legal battle with the state of Michigan over the issue.

Although water provision is a natural monopoly and there is a strong push to keep it under democratic control, its extraction and supply lends itself to profiteering. Democratic control or not, over-extraction can worsen water scarcity in interconnected ecosystems.

With an increasing number of communities facing water precarity in the United States, Indigenous water rights activist and legal scholar Kelsey Leonard posits one solution that could work on a global scale–granting legal personhood to water. In a 2020 discussion on NPR, she said this would give water visibility in a court of law.

If you can grant legal personhood to a corporation, why not to the Great Lakes? Why not the Mississippi River? Why not to the many waterways across our planet that we all depend on to survive?