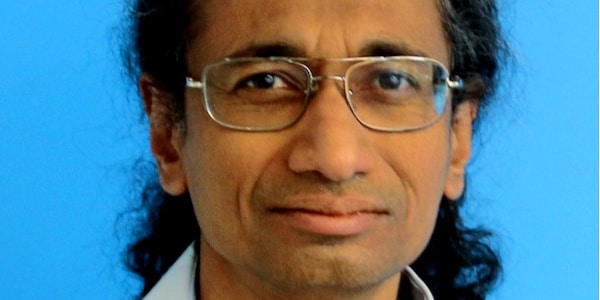 Janine Jackson interviewed IPS’s Basav Sen about rejoining the Paris accords for the February 5, 2021, episode of CounterSpin. This is a lightly edited transcript.

Janine Jackson: The fact that a national newspaper felt obliged to tell readers that the Paris Climate Agreement “has nothing to do with ‘people of Paris,’ as GOP politicians suggest,” tells you something about the caliber of U.S. environmental debate. The fact that media reports on Ted Cruz’s tweet, that Biden’s rejoining the accord shows he’s “more interested in the views of the citizens of Paris than in the jobs of the citizens of Pittsburgh,” elected to put objections to that nonsense in the mouths of Democrats, like the mayor of Pittsburgh—well, that tells you something about how corporate media can report a debate without exactly advancing it. 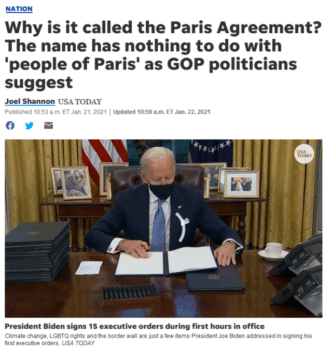 What would it look like to compare Biden’s climate policy, not to whatever numbskull thing Republicans say, but to what’s necessary to mitigate the damage already underway, and to adapt our industry and economy appropriately? Joining us now to talk about that is Basav Sen, director of the Climate Justice project at the Institute for Policy Studies. He joins us now by phone from Maryland. Welcome back to CounterSpin, Basav Sen.

Basav Sen: Thank you for having me on here, Janine.

JJ: We spoke with you in 2019, after Trump had pulled the U.S. from the Paris accord, to the great consternation of U.S. media, who were convinced that “the world still craves U.S. leadership”; there was talk at that time in Congress about a bill to force the U.S. to rejoin the accord. And I remember Wenonah Hauter from Food and Water Watch saying, “The terms of the Paris accord aren’t low-hanging fruit, they’re fruit that has fallen to the ground and begun to rot.” It’s not all that Biden has done on the climate front. But what, first off, do you make of rejoining the Paris accord? Is that symbolic or substantive?

BS: So the more substantive part of it is rejoining the UN Framework Convention on Climate Change (UNFCCC for short) process. And that is not merely symbolic, that is actually substantive, because it means the United States is literally back in the room, negotiating with the rest of the world on addressing climate change, a process that Trump had walked out of.

Now, the bigger question, of course, is what the United States does once it enters that room. And that is a much bigger question. But I would say that at least re-entering the room is an essential first step. On that point, I do applaud the Biden administration for rejoining the Paris climate accord and the UNFCCC process.

Now, having said that, I would now go on to address, you know, what would the United States do in that room. And if the U.S. were to behave the way it has done before in these negotiations, then it would be going back to the failed policies of the past. The United States has been obstructionist-in-chief in global climate talks—by, for instance, refusing to accept the principle that wealthy countries who have disproportionately benefited from industrialization driven by fossil fuels, and therefore are both much wealthier than much of the Global South—countries in Africa and Latin America and parts of Asia and the Pacific—but also are much more responsible for the cumulative greenhouse gas emissions for the last more than 100 years.

And the cumulative emissions do matter, for the simple scientific reason that some greenhouse gases, particularly carbon dioxide, are just very chemically stable and long-lived. So if you’re emitting excess CO2 into the atmosphere from burning fossil fuels, it just stays there; it doesn’t decay rapidly. And so the cumulative emissions do matter. And therefore, the wealthy countries which have been industrialized for a long time, and which have been responsible for a disproportionate share of those emissions, also share a disproportionate amount of the blame for climate change.

And for those two reasons, the fact that, No. 1, they are more responsible for the damage, and No. 2, they can afford to pay for the damage, means that they owe the Global South for the effects of climate change; they owe the Global South to be able to transition their economies away from fossil fuels, and to adapt to the effects of climate change that are already occurring. And the United States has been a roadblock against accepting this principle, and committing the level of funding that is needed for the Global South to address the climate crisis.

And the U.S. has also adamantly opposed a binding global agreement, which is one of the main reasons why we ended up with the toothless nonbinding Paris accord, in which countries make voluntary commitments to reduce their greenhouse gas emissions. And, obviously, we need a mandatory global agreement to deal with a crisis on this level.

So if the U.S. goes back into the room and goes back into those behaviors, those essentially bullying modes of negotiating, where instead of working cooperatively with the rest of the world in finding a solution, the U.S. tries to dictate what the rest of the world can do, and threatens to walk away if other countries don’t agree to those demands, then that would not be helpful. So the next step is to ensure that the United States actually acts as a responsible partner in these negotiations.

JJ: Let me just ask you, because one of the themes that’s coming out from what you’ve said, in terms of media, is the way that media separate the science story of climate disruption and the political story of addressing it, and to the extent that they talk about it as a—of course, it’s a political story, because it’s about power, but big U.S. media’s way of talking about it is usually through this narrow partisan frame, that goes from the 48- to the 52-yard line, and every claim has a counterclaim, and it really doesn’t matter what the reality is. And that’s kind of deemed practical as a focus, because—“Well, if you can’t get changes through Congress, they aren’t going to happen.”

So I’m trying to connect what you’ve just said about it’s what the U.S. does, and not simply sitting down at the table. What the U.S. does has something to do with public protest and public pressure, and so I guess I just wanted to ask you: Is Congress the only place where action happens, is that the preeminent arena? When folks care about these issues, what other spaces should we be thinking about for action? 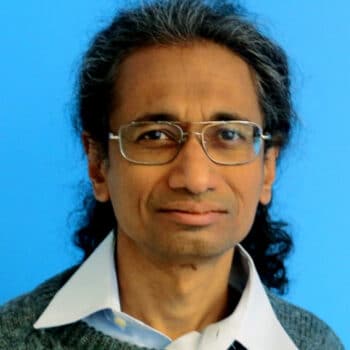 BS: That’s an excellent question. Yes, ultimately, if the United States were to agree to a binding global treaty, it would still need to be ratified by Congress. So on a very instrumental and immediate level, yes, Congress is the body that will or will not agree to joining a binding treaty.

But if we confine the narrative only to what seems politically realistic in today’s Congress, we are completely missing centuries of history and lessons from social movements, because what social movements do is they redefine what is politically possible. No one would have thought, before the civil rights movement, that an end to segregation and Jim Crow was possible. No one would have thought, since the start of the Industrial Revolution and before unions started organizing, that workers in these horrible conditions would actually be able to band together and demand their rights. So social movements’ role is to redefine what is politically possible, rather than to accept the narrative of “OK, this is all that is possible today.”

So obviously, yes, Congress today is…. Well, I wouldn’t say it’s completely unlikely to agree to a binding treaty, but I can see that it will be a hard sell and it will be a very hard fight. But that’s exactly where multipronged pressure from social movements comes in, in the form of everything from polite letters and emails to congresspeople at one level, to disruptive direct action on the other, and everything in between: large demonstrations, and media and social media and art, and building a popular base by just educating and reaching more people about this issue. There’s so many tools at the disposal of our movements to shift the narrative, to shift what is politically possible, and compel Congress to do what we want them to do, rather than what they think they want to do today.

JJ: All right, then. We’ve been speaking with Basav Sen, Climate Justice project director at the Institute for Policy Studies. They’re online at IPS- dc.org. Thank you so much, Basav Sen, for joining us this week on CounterSpin.

BS: Yes, thank you so much for having me on, Janine.