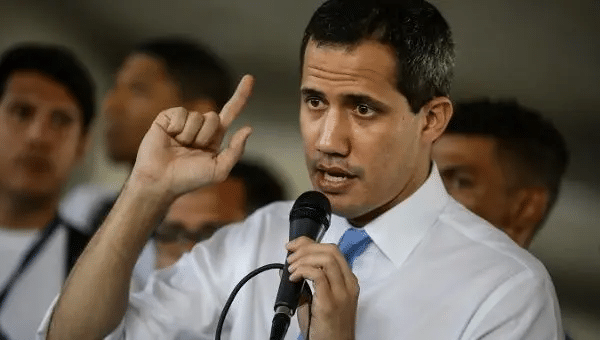 Former president of the National Assembly and opposition leader, Juan Guaidó, during a rally at the Central University of Venezuela in 2019, in Caracas, Venezuela. | Photo: EFE/ Rayner Peña R.

The conversation held by U.S. Secretary of State Antony Blinken with opponent Juan Guaidó is evidence that Joe Biden’s government will continue to use the former Venezuelan parliament member to appropriate all the resources Venezuela holds abroad, according to international analyst Laila Tajeldine, Sputnik reported.

Blinken held a telephone conversation with Guaidó on March 2 and reiterated that the U.S. government continues to support all kinds of pressure on President Nicolás Maduro, with allies such as the European Union, the Lima Group, the Organization of American States (OAS), and the International Contact Group.

“The United States is completely following Citgo (a subsidiary of Petroleos de Venezuela), which is still in a legal process, and the figure of Guaidó allows it to retain Venezuelan assets abroad; until that is not done, the United States is going to continue using the figure of Guaidó to steal all the resources, and once the objectives are fulfilled it will discard it,” Tajeldine said.

Pair this with Blinken's explicit admission of support for "Interim President Juan Guaido" (https://t.co/1B9dwoeZEK ) and it's clear the attempted coup in Venezuela is only beginning. Reluctant continuation of Trump policy? Doubtful. Imperialists stick together: blue and red. https://t.co/4UmP0LxhyG

According to the lawyer, Venezuela is not surprised by this stance of the new U.S. administration since Blinken had vowed publicly before assuming his current position a continuation of the Trump policies (2017-2021).

Early in the year, President Maduro had indicated hope in a change in relations with the United States “on the basis of mutual respect, dialogue, communication and understanding” after Biden’s arrival to power.

However, the analyst emphasizes the existence of a right-wing sector in the U.S. opposed to any change in the current status of confrontation because it bets on the destabilization of Venezuela to get hold of its resources.

“The U.S. economic lobby opts rather for the destabilization or destruction of the institutions and the State in Venezuela, and that lobby is the one that is saying that it is more convenient a destroyed Venezuela, a failed State in which they can arrive through intervention and steal all the resources,” he argued.

In his dialogue with Guaidó, Blinken also highlighted the “importance of a return to democracy in Venezuela through free and fair elections.”

In that sense, the international analyst pointed out that the call for elections is the United States’ strategy to justify its actions against Venezuela.

“Calling for free and fair elections is part of a repetitive discourse, worn out, and that evidently exposes that the only thing they want is to have more time to finish stealing Venezuela’s assets,” she commented.

The Venezuelan government has reiterated that the United States stole more than 30 billion dollars with the imposition of coercive measures, which prevents it from any type of financing.

The executive has requested the lifting of the economic sanctions to face the COVID-19 pandemic and to be able to purchase vaccines, supplies, and medicines freely.