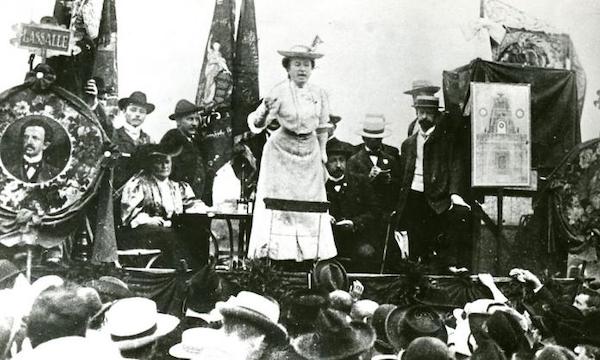 Rosa Luxemburg, one of the great leaders in the history of the socialist movement, was born in Poland (then a province of the Russian empire) 150 years ago this month, on 5 March 1871. Luxemburg cut her teeth in the Polish revolutionary underground, but as an immensely talented political leader, she was drawn to the centre of the European workers’ movement in Germany, where, from the late 1890s, she became the driving force of the revolutionary wing of German socialism.

In the pamphlet Social Reform or Revolution?, the first part of which was published in 1899, she took up the fight against those in the German Social Democratic Party (SPD) who rejected revolution and argued instead for a focus on the gradual reform of capitalism through parliamentary and trade union work.

The leading figure within this “revisionist” current, as it came to be known, was Eduard Bernstein. In The Preconditions of Socialism and the Task of Social Democracy, he argued that, as capitalism developed, the tendency to economic crisis identified by Karl Marx was being overcome, raising the prospect of a permanent and peaceful advance towards universal prosperity.

In response to Bernstein, Luxemburg argued that, far from the contradictions in capitalism and its tendency to crisis being overcome, as the system developed, these contradictions would intensify. The period of growth and prosperity experienced in Germany in the last decades of the nineteenth century was only the calm before the storm. It wouldn’t be long, Luxemburg argued, before the contradictions inherent in the system broke out in the open again. Only this time, with the greater concentration of industry and the heightened competition between states for markets and resources, the crisis would be deeper and broader than ever before.

A little over a decade later, with the outbreak of World War One in 1914, the correctness of Luxemburg’s account was clearly demonstrated. The dream of universal capitalist prosperity was replaced overnight with the nightmare of industrial-scale slaughter in the trenches. Further, the behaviour of the SPD’s parliamentary leaders, who junked all their long-established anti-militarist
principles to vote in favour of funding the war effort, showed the truth of her insight that, rather than changing the system, the reformists would end up being changed by it.

“People who pronounce themselves in favour of the method of legislative reform in place of and in contradistinction to the conquest of political power and social revolution”, Luxemburg wrote, “do not really choose a more tranquil, calmer and slower road to the same goal, but a different goal”. In the face of a renewed crisis of capitalism, of war and brutality on an unprecedented scale, the reformists’ professions of faith in the long-term achievement of a socialist society gave way to a more or less straightforward defence of the existing order.

In her 1906 pamphlet, The Mass Strike, Luxemburg once again assailed the reformist currents of the SPD, this time contrasting their top-down, bureaucratic conception of the socialist movement with Marx’s idea of revolution as “the self-emancipation of the working class”.

The pamphlet was written in the aftermath of the first Russian Revolution of 1905. Events in Russia were greeted with a wave of enthusiasm in the Western European socialist movement. In particular, the central role played by mass strikes of workers in the revolution gave confidence to the radicals within the SPD and the trade unions. For the reformist SPD and trade union leaders, though, the new enthusiasm among workers for the mass strike was a cause for deep concern. It went against all the rules of the game—blurring the boundary between political demands, which they believed were the exclusive domain of the party, and economic demands, which were the responsibility of the unions, and risking the struggle moving beyond the carefully mapped paths of reform.

Strikes were a drain on union funds, and risked provoking the wrath of the capitalist state, which could impose punitive measures that would disrupt the unions’ operations. To the extent that a mass strike might be useful or necessary, it was a tactic to be employed carefully and precisely by the leaders, at the appropriate time and in the right conditions. We can see many of these same attitudes, and worse, in union leaders today.

In contrast to this, Luxemburg considered that the mass, unruly, revolutionary strikes that occurred in Russia in 1905 provided a reminder of where the true wellspring of the socialist movement was to be found. To her mind, the strength of the movement lay, not in the increasingly gigantic bureaucratic machinery of the unions or in the carefully thought-out manoeuvrings of the SPD’s parliamentary wing, but in the self-activity of workers in struggle.

To maintain a hard and fast divide between the economic and political spheres, as was the case with the reformists, is to shut off the mutually reinforcing dynamic that gives the movement as a whole its strength. Further, in line with Marx’s insistence that the overthrow of capitalism and the construction of a socialist society can succeed only on the basis of the self-activity of workers, Luxemburg drew out the way in which mass strikes support the political and organisational advance of the working class. The spontaneous emergence of the Russian soviets (workers’ councils) during the events of 1905 provides the clearest illustration of this, showing that even the most astute and engaged party or trade union committee could be no substitute for the experience of the mass of workers in struggle.

The task of a revolutionary party is not, therefore, to set out an ordained path or schema that workers obediently follow toward the achievement of socialism. It is, rather, to be immersed in the everyday struggles of workers, and to develop the political experience, with and alongside workers, that alone provides the foundation for leadership in a period of revolution.

Luxemburg spent the majority of the years from the outbreak of World War One in 1914 to the revolution of November 1918 behind bars, imprisoned for being one of the very few people in Germany with the courage to speak out against the slaughter unfolding in the trenches. In the Junius Pamphlet, written from her cell in early 1915, she painted a vivid picture of the choice she believed humanity faced in those years: “Either the triumph of imperialism and the collapse of all civilization as in ancient Rome, depopulation, desolation, degeneration—a great cemetery. Or the victory of socialism, that means the conscious active struggle of the international proletariat against imperialism and its method of war”.

Luxemburg saw clearly that imperialism was part of the core logic of capitalism and that its inevitable consequence was war. Her words, written amid the carnage of World War One, provide a reminder of the consequences for humanity if the imperialist rivalries of today, such as that between China and the US, break out into open war.

The tragedy of Luxemburg’s life is that, by the time she realised the necessity of breaking with the SPD and of building a clearly revolutionary organisation, it was too late. The weakness of the revolutionary left during the war meant that, in the decisive battles of the postwar years from 1918 to 1923, revolutionaries were always running to catch up, giving the SPD leaders and other reactionary forces in Germany the time they needed to regroup. The true cost of these defeats is shown in subsequent German history, as it rushed headlong toward the catastrophes of the 1930s and 1940s.

Luxemburg herself was murdered, along with her comrade Karl Liebknecht, on the night of 15 January 1919. They were among the main leaders of the insurgent movement of workers, sailors and soldiers that had brought World War One to an end and which was threatening to topple the entire capitalist order of Germany. Captured by a division of the reactionary Freikorps on orders from SPD leader (and professed “socialist”) Friedrich Ebert, Luxemburg’s skull was smashed by a rifle butt and her body dumped into Berlin’s Landwehr canal.

The murders of Luxemburg and Liebknecht were a major blow to the immediate hopes of the German (and by extension, the world’s) working class. But Luxemburg’s legacy as a revolutionary activist and theorist couldn’t be extinguished so easily. Her ideas, whether on the question of reform versus revolution, the significance of the mass strike or the civilisation-threatening barbarism of imperialist war, are as relevant today as ever.

Increasing numbers of young people are being drawn to anti-capitalist politics. But just as in Luxemburg’s time, there are competing understandings of the word “socialism” and suggested strategies for winning a better world. There are many today who argue along similar lines to the right wing of the German SPD in the years leading up to World War One—that we should give up on the idea of revolution and be content simply to fight for a better deal for workers and the poor within the framework of capitalism.

There’s no reason to think, however, that if we follow the advice of today’s reformist socialists, we’ll end up with anything much different to the kind of carnage that overtook Europe from 1914 on. Nothing fundamental has changed about capitalism in the intervening period.

Capitalism’s tendency to fall into crisis remains. In fact, the crises are deepening and proliferating. If imperialist tensions between China and the US were, at some point in the coming decades, to break out into a direct military conflict, the consequences for humanity would be even more devastating than in the case of World War One. And today it’s not only the threats of economic devastation and war we need to worry about, but also the potentially existential threat posed by climate change.

The choice we face today is no less stark than that which Luxemburg saw confronting humanity at the height of World War One. Will we allow the continuation of a system that’s propelling humanity into one catastrophe after another? Or will we range ourselves against this system and its defenders (even those supposedly “on our side”), and set a course for revolution? Do we want merely to win a somewhat friendlier version of capitalism, or will we fight for a society and economy democratically and collectively controlled by workers, in which the vast capacities and resources of humanity are no longer sacrificed on the altar of the market, but can be turned to restoring our damaged relationship with nature, and to providing the things we need to live a decent life?

If we want to overcome the barbarism of capitalism, then the need for the kind of clear, intransigent revolutionary politics that Rosa Luxemburg’s life and thought exemplify is more urgent today than ever.