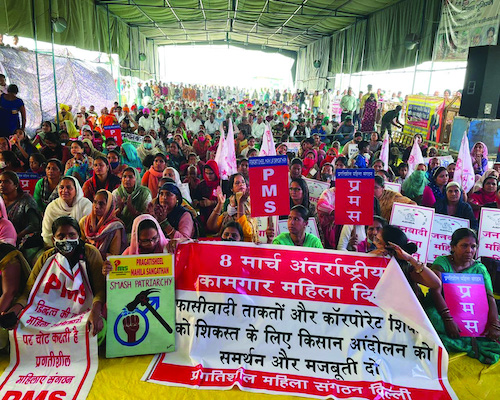 As the farmers’ protest against farm laws enters the summer season, they brave high temperatures and the paucity of basic necessities

As the farmers’ protest against farm laws enters the summer season, they brave high temperatures and the paucity of basic necessities

As an orange sun hung over the Tikri border; Rakesh Tikait along with other leaders was addressing the gathering of farmers on the 99th evening of the farmers’ revolution. To mark the 100th day, plans were to be made. Farmers were preparing to block the National Highway into Delhi for five hours; a task they did well and peacefully. Tikait gave a call again to farmers around the nation “to be prepared for the harvest” and to bolster the revolution simultaneously. Speeches ended and a selfie frenzy began. The young, the old, the media and the police, all wanted to be in this moment as it was special in the history of the world. Winter, spring and now summer, yet the farmers’ revolution lives on.

But far from the maddening crowds, the revolution had got a new friend. Against public advice, he kept ramming into the yellow police barricades, trying to enter Delhi. I caught him red-handed. Shyly, he ducked and began to look at the carrot shavings. His mind was yet to understand why humans used barricades. The suspect was big, blackish and middle aged. His curved big black horns made him stand out; he was an Indian humped bull.

The advances in farm machinery and artificial insemination have made the indigenous bull redundant. Most farmers sell off the male calves at birth and the remaining ones roam the streets of cities and townships scavenging on garbage. The more lucky ones are sold to slaughterhouses to meet death quickly. There is also a special class of bulls that is part of the artificial insemination industry; they are bred and dishonoured by sophisticated instruments, robbing them of their spermatozoa. Today the Indian bull, far from being Shiv’s ‘Nandi’, is a pariah and first victim of industrial agriculture. With less than one per cent bulls working the farms, India flaunts a large dairy and cattle-rearing sector. The Indian species are so intermixed with foreign breeds, mainly Jersey and Holstein, that it’s hard to tell what is indigenous anymore. Many farmers fear that the story of the Indian bull will be their story, too, if the three farm laws and a neo-company raj enter India. Only with minimal farmers and maximum fossil fuel-based machines will the fields be cultivated.

The more immediate challenge to the revolution is, of course, the increasing heat–political and physical. Temperature variations have already started affecting people’s health. With hotter days ahead, the entire encampments are modifying their tents. Many farmers are now constructing high bamboo-and-canvas tents for better air circulation. The supply of drinking water and perishable items like milk is becoming slightly problematic. Food wastage may also increase due to insufficient refrigeration facility. Farmers have mobilised another round of fundraising for installing reverse osmosis (RO) plants within the encampments at Tikri border because the groundwater is highly contaminated with industrial effluents.

The Ghazipur border is also going for a summer makeover. Much of the encampment at this border is on the Asian Highway2 (AH2). Surrounding it are Ghazipur’s garbage mountain, posh apartments and an open sewage canal that flows underneath it. The summer will bring mosquitoes and diseases. Both the sites will have to be prepared to combat vector and water-borne diseases. As these fears grow, a farmer from Jind died by suicide at the Tikri border. An avoidable death!

The farmers’ revolution has transformed from an agrarian movement into a united opposition to the totalitarian Government. The BJP has suffered electorally in Punjab and Haryana and a strict boycott of the BJP and its leaders is in place in these States. While all eyes are on Bengal, the farmer leaders are expanding their base to the States of Rajasthan, Madhya Pradesh and Uttar Pradesh. The morale on the ground at the revolution sites has never been higher. Because the encampments have become a breeding ground for hope, camaraderie is the only cure for hate. Many of these farmers have stepped out of their region for the first time, yet they quickly learnt to work and endure suffering together. The movement is more disciplined than earlier and the farmers are ready to continue resisting.

Penance has been the path to spiritual awakening–Jesus on the cross or Buddha starving under the Bodhi tree–and the farmers are also suffering for the sins of our world. A bullet may bring them death as a slaughter may begin any day but they hope their deaths will not be in vain and shall wake up a sleeping world. It will bring together farmers and citizens all over the world to rise against this evil. Despite the odds, the farmers are hopeful.

Our world and democracy is at a dangerous crossroads–Earth and millions of farmers on one side and Big Ag and corporate tyranny on the other. If Indian farmers win, democracy of the world lives; otherwise, Aldous Huxley’s ‘Brave New World’ awaits us all.