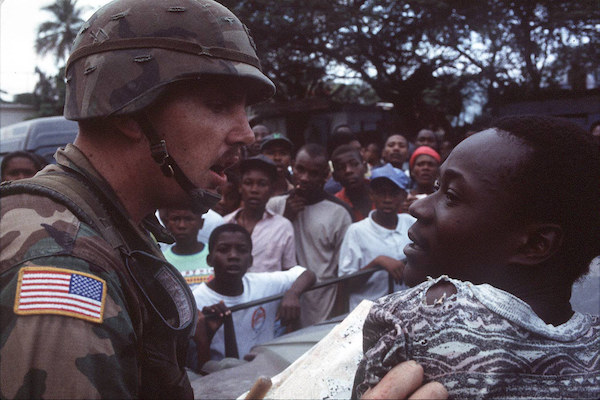 Haiti faces serious political crisis. The country has experienced great political difficulties ever since gaining independent nationhood in 1804. Impaired governance stems in large measure from U.S. meddling over many years. We examine the current crisis and the basis for U.S. zeal to curtail Haiti’s future.

Mass demonstrations have continued intermittently since mid-2018, when two millionHaitians were in the streets. At various times, protesters have called for: (1) relief from high prices for oil and gas, the result of IMF austerity decrees; (2) relief from shortages of basic supplies; (3) punishment of government officials who embezzled billions in funds from Venezuela’s PetroCaribe program of low-cost oil for Caribbean peoples (President Jovenel Moïse stole $700,000); (4) Moïse’s resignation.

Demonstrators targeted Moïse aggressively after he closed down Haiti’s parliament in January 2020. He’s ruled since by decree.  A general strike took place prior to February 7, 2021, which, according to lawyers and judges, marked the end of Moïse’s presidential term. He remains.

Moïse’s 2015 election victory was fraudulent. A transitional president served for one year. Moïse took office in early 2017 after winning a second election weeks earlier. Only 18 percent of Haitian adults voted.

Moïse recently appointed his own electoral council and his own committee for amending the constitution. He cemented ties with President Trump by supporting U.S. regime-change plans for Venezuela. His new National Intelligence Agency looks to one observer like “a new Gestapo-like force of armed spies.” Moïse has disregarded the suffering of Haitians, the most poverty-stricken population in the Americas.

Haiti’s opposition is divided between center-right political parties, headed loosely by lawyer André Michel, and protesters in the streets. Many of these belong to social movements and labor unions making up the new Patriotic Forum.

Violence is rampant. Some “150 criminal bands” have carried out murders and massacres. According to Argentinian L autaro Rivara, active in Haiti, “Most of these groups have been organized and financed by senators, ministers, and presidents–when they are not directed fomented by the imperialist powers.” Some gangs have united under government auspices as the “G9 and family”.

These various problems reflect political norms from Haiti’s past. On display then and now have been: ineffectual, corrupt, undemocratic governance; governmental inattention to people’s basic needs; persistent, if unsuccessful, popular opposition; and politics mediated through violence. Submission to foreign masters has been less obvious recently than is usually the case. None of these failings operate against U.S. expectations for Haiti.

The many foreign NGOs active in Haiti function autonomously, rarely collaborating with Haiti’s government. The “Core Group” of nations involving the United States, France, Canada, and others make strategic decisions for Haiti on their own.

Haiti has long had to cope with burdensome foreign-debt obligations. Between 1825 and 1947, Haiti sent payments to France as compensation for Haiti’s slaves having liberated themselves. Said one observer recently,

the constant of financial needs forces all Haitian governments to take on even more debt with North American and European Banks.

The U.S. and the U.S. dominated world financial institutions forced Haiti to open its markets [allowing] millions of tons of U.S. subsidized rice and sugar into Haiti–undercutting their farmers and ruining Haitian agriculture.

The United States has long had its way with Haiti. It withheld recognition of Haiti’s national independence until 1862, and embargoed trade with Haiti until 1863. A U.S. naval squadron arriving at Môle Saint-Nicolas in 1889 sought to occupy the port permanently to block access to Haiti by ships of other nations. The effort failed, partly due to the intercession of U.S. ambassador Frederic Douglass, the famous abolitionist.

The plundering, murderous Duvalier dictatorship, father and son, ruled Haiti from 1957 until 1986. The U.S. government cited anti-communism as justification.

CIA personnel collaborated with Haitian military officers to plan the coup that in 1991 removed President Jean-Bertrand Aristide. That he returned to power in 1994 by means of a U.S. invasion typifies Haiti’s subservience to decisions made in Washington.

Paramilitaries trained and funded by the United States removed President Aristide in 2004. Canada and France helped out. A U.S. plane conveyed Aristide to the Central African Republic. The three nations arranged for United Nations troops to occupy Haiti. They would remain until 2019.

There was hell in Hayti (sic) in the red waning of the eighteenth century… while black men in sudden frenzy fought like devils for their freedom and won it… the shudder of Hayti was running through all the Americas. (W. E. B. DuBois, John Brown, 1907)

The U.S. slavocracy had much to protect. “Between 1775 and 1825 … a slave-labor large farming system [developed]. There was a close and indissoluble connection with the world’s cotton market.” (DuBois, Suppression of the African Slave Trade, 1896) The labor of enslaved people generated wealth and enabled debt repayment. Slave ownership represented 20 percent of private U. S. wealth.

Fearful slaveowners had Haiti on their minds, more so when slaves were unruly. Slaves conspired, sometimes were discovered, and rebelled. That Denmark Vesey, leader of a failed slave rebellion in Charleston in 1822, had been enslaved in Haiti was hardly reassuring.

The enslavement of Black people in the United States eventually ended; racism did not. Haiti manifested a new orientation that would by no means mollify U. S. animosities against its people.

Historian C.L.R. James explains that, “Haiti had to find a national rallying point [and] discovered ‘negritude’ [involving] “substitution of Africa for France.” Until then, “Mulattos who were masters had their eyes fixed on Paris.” At work was the influence of pan-Africanists Marcus Garvey, George Padmore, and Martinican poet Aimé Césaire, regarding whom, says James,

it is Africa and African emancipation that he has in mind. (Black Jacobins, 1989)

As a kind of African extension in the Western Hemisphere, Haiti solidified its place within the orbit of U.S racism. That showed in 1898 when U.S. troops intervened in Cuba’s war for independence from Spain. Later Cuba would become a U.S. protectorate of sorts. U.S. justification for both endeavors, according to statements, was to prevent “another Haiti,” a “second Haiti.”

Much later, U.S. imperialists were alert to real or imagined socialist stirrings in Guatemala (1954), Dominican Republic (1965), Indonesia, (1965-66), Chile (1973), Cuba perennially, and Haiti. There, anti-communism competed with racism as motivation.

Maybe with the advent of President Jean-Bertrand Aristide in Haiti, whispers were heard in U.S. government circles of “another Cuba” in the making. After all, Haitians are poor, they suffer, they die young, and they are heirs of a revolution.

Aristide was new. His 1991 election victory with a 67% plurality was Haiti’s “first successful democratic election ever,” according to the conservative National Republican Institute. Aristide gained reelection in 2000 with 91% of the vote.

An observer notes that,

In the period of governance by Fanmi Lavalas, the party founded by President Aristide, more schools were built than the total constructed between 1804 and 1994. Twenty percent of the country’s budget was mandated for education. Women’s groups and popular organizations helped coordinate a literacy campaign … The minimum wage was doubled … Health clinics were established in the poorest communities. The government also launched an aggressive campaign to collect unpaid taxes owed by the wealthy elite.

Haiti waits. Maybe Haitian President Moïse will be removed and maybe Haiti’s parliament will reopen. Maybe the new Biden administration will go along with a new array of officeholders. His representatives may pull strings selectively, or give a nudge to favorites. What the U.S. government does in the short term, however, won’t matter much to masses of Haitian people who are victims.

What would matter for them is certainty of their independence, of being able to take charge of their own existence. Movement in that direction depends on change in the United States, forced by popular mobilization there, toward a politics that embraces the notion of human equality.