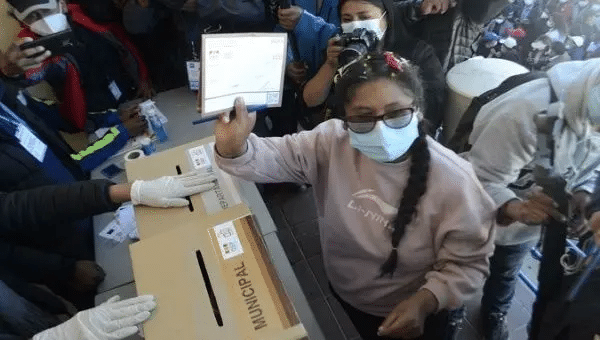 Following the conclusion of local elections in five Bolivian departments on Sunday, the Movement Towards Socialism (MAS) consolidated its dominance in subnational governments by winning 240 out of 336 mayoralties.

Representing a preponderance in 70 percent of the country’s local governments, the Socialist candidates secured 13 more mayorships than in the last local elections held in 2015.

Although Santa Cruz is the department in which MAS won the least number of municipalities (28 out of 54), the Leftist party obtained control in large departments such as La Paz, El Alto, and Cochabamba.

Other political forces such as Third System Movement (MTS), Together (U), We’ll win (V), We believe (C), and Democrats (D) are predominant in 43 local and regional offices.

Bolivia: In this month’s subnational elections, the governing MAS (left) won 3 of 9 departments and is in a runoff round in 4 more. This map shows the winning party/parties in each department and the winner of each departmental capital+El Alto.#Bolivia #EleccionesSubnacionales pic.twitter.com/E5wGf9gHyD

Due to irregularities affecting the electoral process on March 7, local elections took place in the Pando, Potosi, Beni, Chuquisaca, and Santa Cruz departments on Sunday.

Last week, the Supreme Electoral Tribunal President Salvador Romero announced a second round to elect the governor in the La Paz, Tarija, Chuquisaca, and Pando departments on April 11 because the candidates did not achieve sufficient votes in the first round.

Bolivians elected 4,962 new authorities, 583 of whom are departmental authorities, 27 regional, and 4,352 municipal.