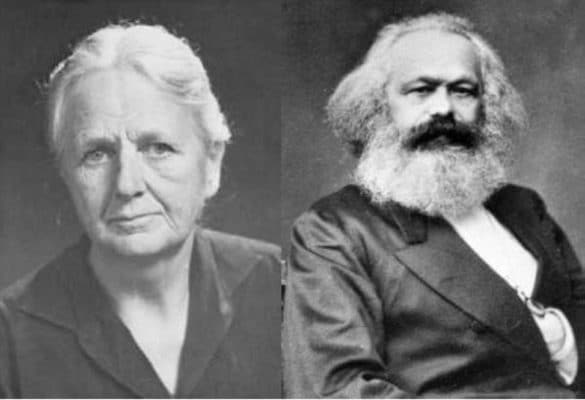 A series of notable recent anniversaries in the heterodox (non-mainstream/non-orthodox) economics calendar have prompted a reconsideration of Karl Marx’s lasting influence within the field. Most prominently, 2018 marked the bicentenary of Marx’s birth; while 2019 witnessed the centenary of U.S. left economist Hyman Minsky’s birth; 2020 the 50th anniversary of Polish socialist economist Michał Kalecki’s passing; and 2021 the 150th anniversary of Polish Marxist political economist Rosa Luxemburg’s birth.

The revival of interest in such alternative economic thinking reflects the failures of mainstream economics to foresee, explain, or remedy the present structural crisis of neoliberal capitalism.

The global financial crisis of 2008 created a legitimacy crisis for finance-led capitalist accumulation, and even for the capitalist mode of production outright. The ensuing decade and more of austerity cutbacks, which disproportionately impacted the poorest, only served to deepen the contradictions of capitalism in crisis, further stoking class- and identity-based inequalities and tensions.

The latest chapter in this saga has seen the neoliberal recovery strategy crash and burn under the weight of overlapping political-economic and social-ecological contradictions: from wage stagnation, record debt levels, weak profitability, and underinvestment in public infrastructure; to climate catastrophe, mass extinction, COVID-19, and increasing social conflict. This has led to a renewed appetite amongst social and socialist organisations for progressive and radical economic ideas and strategies to inform activist political education. There is also growing interest within the academy and amongst students, though the stranglehold of neoclassical economics over public education and mainstream economic commentary and policy has so far proven difficult to breach.

While Marxist economics provided the dominant alternative political-economic paradigm during the previous structural crisis of capitalism–the heightened social conflict of the 1960s intersecting with the stagflation of the 1970s–different varieties of Keynesian economics have been the main beneficiary this time around.

Minsky (of “Minsky Moment” fame) and Kalecki (of relatively little fame) are generally more recognised as key contributors to the heterodox, so-called “post-Keynesian” (read: fundamentalist Keynesian) school of economics. According to Keynes’s preeminent biographer, “the ‘post-Keynesian’ school of economists has remained closest to the spirit of Keynes’s General Theory.” The post-Keynesians, building on the most radical aspects of Keynes’s work, stand opposed to what Joan Robinson called the “Bastard Keynesianism” of the orthodox, so-called “neoclassical” school.

By contrast, the neoclassical-Keynesian synthesis of the post-World War 2 period (represented today by figures like Paul Krugman) incorporates superficial aspects of the Keynesian critique while ignoring more fundamental arguments that break with the core precepts of mainstream economic theory.

Yet the post-Keynesian tradition in reality owes as much to Marx as to its namesake. Indeed, as one of Keynes’s closest and most celebrated collaborators, Robinson commented (in a somewhat cryptic reply to the question of whether she considered herself a Marxist) that:

Everybody has learned a great deal from Marx. His diagnosis of capitalism is the only one that makes any sense.

This is the basic premise of our article, “Marxism, Crypto-Marxism, and the Political Economy of Capitalism”, a contribution to the Review of Political Economy commemorative issue on “The continuing relevance of Marx”. We maintain that the Old Mole’s foundational influence extends well beyond the self-identified Marxian school to several other important heterodox traditions within economics, though this often passes unrecognised on both sides. Consequently, the proper boundaries of the Marxian school of economics are much wider than either many self-identified Marxists, or indeed crypto-Marxists, generally consider.

Self-identification as a Marxist or otherwise is fundamentally a matter of politics and/or philosophy, meaning that such identifications cannot simply be attributed to the courage or cowardice of professional economists. Heterodox economists are universally reviled and/or ignored within the mainstream (if to varying degrees), after all.

Nevertheless, we argue that each of the Minskian, post-Keynesian, Sraffian, institutional, feminist and social ecological (dominant) schools/branches of heterodox economics make a significant contribution in developing effectively Marxist themes and theory. Self-identified Marxists, as well as crypto-Marxists, stand to benefit intellectually and practically from a mutual recognition of this implicit division of hererodox economics labour. We discuss Marx’s influence on each school in turn.

Several prominent post-Keynesian thinkers and historians of economic thought, such as John King, argue that Kalecki’s work is “more realistic and superior, and ‘surpassed’ that of Keynes”. Again, taking Joan Robinson as an exemplar, she was quick to point out that Kalecki independently “produced a more coherent version of the General Theory”, which complemented a monetary accounting analysis with a Marxist analysis of class dynamics, profitability, and the concentration and centralisation of capital. In contrast to Keynes’s background in neoclassical economics, Kalecki was introduced to the discipline through reading leading Marxist economists of the day, such as his brilliant compatriot Rosa Luxemburg.

Marx even had a covert influence on Keynes’s view of capitalism as fundamentally a “monetary production economy”, when he adapted Marx’s famous circuit of capital in early draft chapters of the General Theory. This was abandoned for a more conventional framing in the final draft, however, likely to avoid any radical associations. These earlier drafts were aired some decades later after being discovered in a laundry hamper.

Given Minsky’s strong public association and personal identification with Keynes, it is perhaps somewhat ironic that the former’s socialist parents “met at a gala of the Jewish section of the Socialist Party in Chicago to celebrate the centenary of Karl Marx’s birth, which is why the centenary of Minsky’s birth is one year after the bicentenary of Marx’s”. Though usually remembered as an advocate of left Keynesian social democratic reforms of the capitalist system in later life, he had been active in the Socialist Party of America for a period earlier on.

Kalecki was a particularly important intellectual influence. Whereas Marx’s focus was on the production of surplus value (the labour process), and Kalecki’s on the realisation of surplus value (the dynamic components of aggregate demand or total spending), Minsky focused on a complementary analysis of financial instability (speculative credit-driven financial booms and busts).

Minsky’s contribution allows for a more balanced treatment of real and financial aspects of capitalist crisis, pregnant already in Marx at least, if not always observed by subsequent generations of self-identified Marxist economists.

Like Kalecki, Piero Sraffa is a lesser celebrated, if no less influential, heterodox economist. He is perhaps best known for his attack on the neoclassical justification of profits. Sraffa’s close friendship and intellectual collaboration with the Italian Marxist Antonio Gramsci is well known (Sraffa even providing the books, pens, and paper with which Gramsci wrote the Prison Notebooks). Indeed, Gramsci considered Sraffa to be a Marxist and a communist. Though often more associated with the surplus approach of classical economist David Ricardo, his initial route in was through Marx via Gramsci.

Marx also had an important influence on the “old” institutional economics of Thorstein Veblen, more remembered today in the discipline of sociology than that of economics, though it did vie for dominance over the latter during the decades prior to World War 2. A concern with the dialectical relationship between social structures (political and cultural institutions) and the economic base drew obvious parallels with a (non-dogmatic) Marxist understanding of the materialist conception of history.

In addition to successive modes of production or stages of social-economic development characterising historical materialism, self-identified Marxist economists have also developed a theory of stages of capitalism relying on institutional innovation in response to structural crises. This draws on the early work of Hilferding, Bukharin, and Lenin in the early 20th century, followed by Baran and Sweezy and Ernest Mandel in the postwar era, and brought up to date by the French Regulation Approach (RA) and American Social Structure of Accumulation (SSA) theory since the 1970s.

The concern of heterodox feminist economics, at least, with general questions of social structure, social conditioning, and social embeddedness, and not solely issues of gender and caring labour, likewise has obvious parallels with the Marxist methodological perspective.

In particular, Marxist feminists like Silvia Federici have developed influential theories of social oppression and expropriation on this basis, both critiquing and augmenting the traditional Marxist conception of labour. The emergence of Social Reproduction Theory (SRT) through the work of Tithi Bhattacharya and others seeks to reconcile what Heidi Hartmann previously referred to as the “unhappy marriage” between Marxism and feminism, and to their mutual benefit and development.

Finally, social (heterodox) ecological economics has a similar love-hate relationship with Marxism. The idea that that economic activity is not just socially but also ecologically embedded is a logical extension of the historical materialist perspective. Indeed, the genesis of such thinking is already present in Marx’s writings on the “metabolic rift” between circuits of capitalist production and consumption in the cities and the depletion of the soil in rural areas that provided the resources; and Frederick Engels’s writings on the “dialectics of nature”, as recounted by Marxist ecologists like John Bellamy Foster. Again, social ecological economics both draws on and substantially critiques and develops these early insights.

For many years, Marxist economics concentrated on class conflict in capitalism and did not strongly emphasize capitalism’s conflict with nature. Nevertheless, it was only a matter of time before an analysis that identified accumulation as “Moses and the prophets” could find a possibility of common cause with a movement developing a critique of growth. Ecological economics provides the essential insight that an understanding of economic dynamics does not in itself provide a guide to effective environmental policies. One also must simultaneously understand ecological dynamics to properly understand the impact of the human economy on nature.

It is important in all of this not to overstate the case. There are clearly non-Marxist directions and strands associated with each of the leading heterodox schools of economics, outside of the self-identified Marxist school. But there is certainly more crypto-Marxism in the heterodox economics community than is generally understood (or admitted at any rate).  If one were to imagine heterodox economics as a bundle of different heterodox traditions developing through time, it is our contention that, in the 20th century, the Marxist strand developed a set of shoulders within the other strands of modern political economy. As a consequence, the Marxist strand partially traces its descent to the present day in the context of these other strands.

It is incumbent upon the Marxian tradition to recognise that other heterodox traditions have succeeded in putting flesh on these Marxian bones in ways that are potentially consistent with the development of an historical materialist outlook on capitalism. A reciprocal and perhaps explicit recognition of the Marxian character of many research questions by the other heterodox traditions could substantially contribute to the further emergence of an integrated heterodox alternative to neoclassical economics.

Cian McMahon is Postdoctoral Research Fellow at the International Centre for Cooperative Management at Saint Mary’s University, Halifax, Nova Scotia. He is coeditor (with Terrence McDonough and David M. Kotz) of the Handbook of Social Structure of Accumulation Theory (Edward Elgar, forthcoming 2021).

Terrence McDonough is Emeritus Professor of Economics at the National University of Ireland, Galway. He is coeditor (with David M. Kotz and Michael Reich) of Contemporary Capitalism and Its Crises: Social Structure of Accumulation Theory for the 21st Century (Cambridge University Press, 2010).