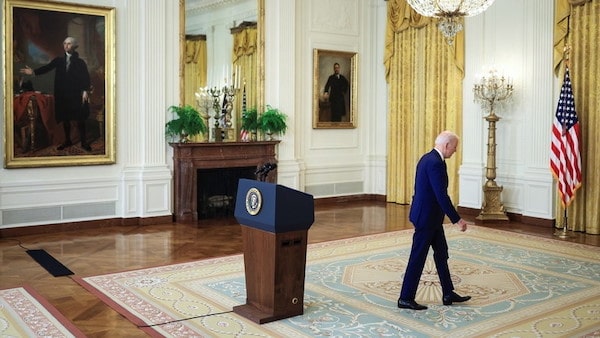 A confusing picture emerges as the U.S. diplomacy toward Russia in recent weeks, especially in the past week since April 13, runs a zigzag course. To recap, Washington has been quietly encouraging Kiev to be belligerent along the contact line with Ukraine’s breakaway region of Donbas.

Repeatedly affirming the U.S.’ “unwavering commitment to Ukraine’s sovereignty and territorial integrity” and concerns over “the sudden Russian military build-up in occupied Crimea and on Ukraine’s borders,” the Biden Administration has been steadily boosting Ukraine’s military capability to provoke Russia.

Moscow estimated that a precipitate situation might be engineered as in 2008 when Washington encouraged the regime in Georgia to pick up a fight with its breakaway regions that inevitably led to a conflict with Russia. Thus, on April 7, the Kremlin warned that Russia would keep military forces near the border with Ukraine and could take “measures” if a precipitate situation arose threatening Donbas or Crimea.

In a reversal of the policy of President Obama not to provoke Russia, Biden Administration has begun supplying lethal weapons to Ukraine, which has fired up revanchist neo-Nazi Ukrainian nationalists. Indeed, the U.S. is fully aware that the Ukraine issue concerns Russia’s core interests, and Moscow will never give in. Simply put, if Ukraine joins NATO, the reach of the alliance gets extended to Russia’s doorsteps.

Thus, the announcement in Kiev in early April of large-scale military exercises planned between Ukraine and NATO armies disregarded the Kremlin’s repeated warnings that any deployment of NATO troops to Ukraine would threaten stability near Russia’s borders. On top of it, Turkey informed Russia on April 9 that two U.S. warships were due to cross the Bosphorus and enter the Black Sea to remain there until May 4.

Amidst these rising tensions–with Washington drawing the EU and NATO into its containment strategy against Russia–President Joe Biden telephoned Russian President Vladimir Putin on April 13. According to the Kremlin readout, Biden expressed interest in interaction with Russia on pressing matters such as “ensuring strategic stability and arms control, Iran’s nuclear programme, the situation in Afghanistan, and global climate change.” The White House readout said Biden proposed a summit meeting in a third country in the coming months to discuss the “full range of issues” facing the U.S. and Russia.

Biden’s motivation remained a mystery, since only two days later, on April 15, the State Department disclosed that he had also signed an Executive Order imposing more sanctions against Russia and that the U.S. Treasury had already issued a directive that prohibits American financial institutions from participation in the primary market for ruble or non-ruble denominated Russian bonds, the intention being to weaken and destroy the Russian currency. Besides, the U.S. also expelled 10 Russian diplomats.

Either Biden had a memory lapse and forgot he was to sign the Executive Order when he called Putin and played nice, or he was plain insincere. (Curiously, the Executive Order also delegated the executive power to the state dept to use the discretion to impose even more sanctions if needed in future!) This strange behaviour has triggered speculation. Some say Biden may not be in control of the Russia policies that are being driven by the “Deep State”.

But Moscow reacted strongly. The Foreign Ministry spokesperson Maria Zakharova warned that Washington’s “hostile moves are dangerously raising the level of confrontation” and that the only plausible explanation for such strange behaviour is that the U.S. “is not ready to accept the objective reality of a multipolar world in which American hegemony is not possible. It is placing its bets on sanctions pressure and interference in our domestic affairs.”

But then came yet another surprise when within hours, on April 15 itself, Biden appeared personally before the media to make what appeared to be a conciliatory statement about Putin and Russia. He insisted, “The United States is not looking to kick off a cycle of ecs–of escalation and conflict with Russia. We want a stable, predictable relationship… When I spoke to President Putin, I expressed my belief that communication between the two of us, personally and directly, was to be essential in moving forward to a more effective relationship…

Now is the time to de-escalate. The way forward is through thoughtful dialogue and diplomatic process. The U.S. is prepared to continue constructively to move forward that process. My bottom line is this: Where it is in the interest of the United States to work with Russia, we should and we will. Where Russia seeks to violate the interests of the United States, we will respond.

However, as it turned out, these sugar-coated words hid a bitter pill to swallow–that Russia should gracefully accept the sanctions and simply reconcile with the idea of a selective engagement with Washington whenever it suited U.S. interests.

Amidst such contradictions, a thaw the U.S.-Russia tensions cannot be a realistic possibility. Moscow is unlikely to compromise on core interests. On the other hand, Biden also knows that Russia’s participation is vital for solving many major global issues and to that extent, Biden may want to ease tensions.  Indeed, a pragmatic working relationship also cannot be ruled out, as the U.S. is well aware that Russia is interested in easing tensions with the West, given the challenges it is facing over its domestic economy, production lines and stability in the Middle East.

Simply put, the current tensions would have unpredictable consequences. There is room for the two sides to interact over issues such as strategic stability and arms control, the Iran nuclear issue, Afghanistan or climate change. Above all, Russia is also keen to be a participant on the global stage. But a summit cannot produce substantive results unless it is backed up with adequate preparations and in-depth exchanges regarding each side’s interests and concerns. Whereas, the current state of play does not allow space for constructive diplomacy.

Russia has since blacklisted eight current and former American officials and sent ten diplomats packing in retaliation for U.S. sanctions. Evidently, as the Russian statement put it, these were “just a fraction of the capabilities at our disposal.” Nonetheless, the State Department has promptly lamented this “escalatory” response and warned that it might respond. In effect, the U.S. insists on its prerogative to impose sanctions, but Russia should not retaliate.

How far this pantomime will continue under the  rubric of “diplomacy” remains to be seen. Expectations must be kept low. Evidently, the Biden administration has no interest to use diplomacy to wean Russia away from an alliance with China, as Kissinger once advised, so as to isolate and encircle China, the U.S.’ main archetypal rival on the world stage. Biden instead expects Russia to submit to American writ and thereby deny strategic depth to China.

But will Russia submit to the U.S. hegemony–a nation that held its ground against Napoleon and Hitler? No, it will never. The Ukraine issue will, therefore, remain a tinder box, which can blow up anytime and become a laceration wound on Russia’s body polity and contaminate and weaken it–which, of course, is also the ultimate logic of the regime change in Kiev in the 2014 colour revolution masterminded by the U.S. state department officials including Victoria Nuland, who has resurfaced as Undersecretary of State for Political Affairs in the Biden Administration currently.