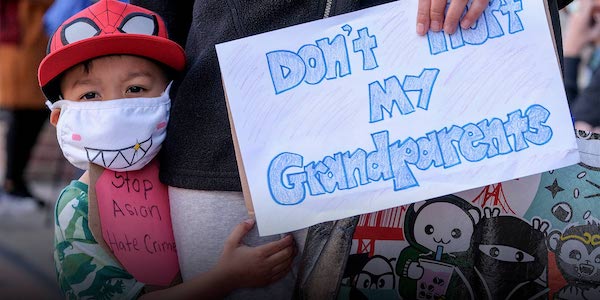 Five years ago, at a class picnic held by my then-6-year-old son’s school in a predominantly white, middle-class neighborhood in Seattle, one of his classmates started screaming at him about “The Chinese!” I was shocked and appalled. I never thought something like this would happen to us in one of the most progressive cities in the United States. Frozen, my emotions cycled between anger, sadness, and confusion. Not knowing how to react or what to say, I said nothing. Taking my child’s hand, we quietly left.

I should have been better prepared than most for such an outburst. As an academic specializing in child development, education, and morality, I know how sensitive young children–even infants–are to physical, linguistic, and social cues about human groups, categories, and differences. Knowledge, preferences, and value judgments about race are developed very early in a child’s life. Yet my studies hadn’t prepared me for actually confronting racist acts or, in this case, the seeds of racism, in an innocent-looking 6-year-old.

One year ago, at the height of the “Chinese virus” fervor, I received a Facebook message from a friend living in North Carolina. Their neighborhood was locked down, but a parent had organized a “passport” event for local children, asking each participating family to wrap a package containing something that represented their ethnic or cultural heritage. My friend’s 6-year-old boy was very excited about it, but she was stunned after a fellow parent, while complimenting the organizer for spreading “global education and awareness,” jokingly reminded people to avoid “China packages.”

Although she was hurt by her white neighbor’s racist words and shocked by their ignorance and sense of entitlement, my friend found herself frozen in the same mix of anger and confusion as I was on that playground all those years before. What kind of “global education and awareness” is language like that bringing to our kids? We spent some time chatting about our emotional journeys as international students from China, now raising children in America. We remembered the injustices and prejudices we encountered, and the flashes of empathy and solidarity in otherwise dark times. “I used to be silent on occasions like this. Too uncomfortable to confront others, I would keep my grievances and anger to myself,” she told me.

But now I realize, if I don’t stand up and fight back, then the bullying won’t stop.

In the end, she warned her neighbor about his language, adding that her family “will be proudly preparing a package from China.”

A year later, in the wake of the mass shootings in the southeastern city of Atlanta, I was surprised when my child’s public elementary school, which talks frequently about how much it values diversity, equity, and inclusion, didn’t send out any expressions of solidarity. The tragedy was the result not just of a pandemic year of misunderstandings, hatred, and discrimination against Chinese, Asians, and Asian Americans, but also centuries of “yellow peril” tropes and the hyper-sexualization of Asian women. I’m even more intrigued by the complete absence of any Asian American history education in my child’s elementary school curriculum, especially considering how social justice issues form the core of their social studies unit.

For the first time, I spoke up. “(This gap in the curriculum) is particularly puzzling as we are living in Seattle, a progressive city committed to diversity and justice, with not only a strong presence and contribution of Asian American populations today, but also an undeniable history of Asian American suffering,” I wrote in a letter to the principal, listing examples like Seattle’s riots in the 1880s against Chinese immigrants and Japanese internment camps during World War II. Then I wept. I had–have–no words for the sorrow, bitterness, and anger caused by the Atlanta shootings.

I spent a whole afternoon watching the PBS documentary “Asian Americans.” Many of the activists and scholars interviewed for that documentary said they never learned about Asian American history until college, or even later. Viet Thanh Nguyen, a Pulitzer Prize winner and Vietnamese refugee, described his moment of awakening: Growing up in the U.S., he was raised on Hollywood movies about the Vietnam War. So many Vietnamese civilians were killed on screen, yet the focus of the movies was always on white Americans, and they were always the heroes. He said it was the “unspoken trauma” of Vietnamese Americans like him that prompted him to tell his own stories. I wept again. “Unspoken trauma” summed it up perfectly.

For my child, my friend’s child, and many other Asian American children born in the U.S., it’s rare to learn about their history in schools or through mainstream American media. National Public Radio’s Alisa Chang, in an interview with sociologist Wang Yuen about the Atlanta shootings, said: “I’ve been an Asian woman, obviously, my entire life. This is the first time I can remember talking to anybody about the Page Act for this network as a journalist.” As a Chinese immigrant, I had never heard of the 1875 Page Act until recently: It was the first restrictive federal immigration law in the U.S., prohibiting the entry of Chinese and other East Asian women, who were seen as a source of immoral temptation.

On a rainy afternoon in late March, I participated in a rally against anti-Asian racism. Before the march began, a teenage boy took the stage to give a speech. He explained that Asian American kids were constantly being told they’re not creative, they’re not sociable, they lacked leadership. What our children learn about themselves can be boiled down into a long list of “un-American” attributes. Perhaps that helps explain why my child, born and mostly raised in the U.S., still doesn’t think of himself as “American.” We are perpetual foreigners. In good times we are dispensable. In bad times we’re scapegoats and enemies.

My son has picked up on this. There are so many questions on his inquisitive mind. Last year, he demanded, “Mom, why would Trump say ‘China virus?’” A few days ago, after visiting the Bainbridge Island Japanese American Exclusion Memorial near Seattle, he asked: “Does America have good relations with China now? Will we be sent to internment camps one day?” George Floyd’s death, too, shocked him:

Martin Luther King Jr. died a long time ago; why do these injustices still happen in America?

On March 18, scholars from the Society for Research in Child Development and the Asian American Psychological Association presented written testimony to a Congressional hearing on discrimination and violence against Asian Americans. The SRCD has found widespread experiences of racial discrimination among Chinese American parents and children. As a scholar, this work gives me hope that my field can make an impact on anti-Asian racism. But as a parent, I just want to tell my past self–that speechless, uncomfortable mother standing on a playground five years ago–not to be afraid: that she should stand up to racism and fight the good fight. It’s too late for her, but not too late to have the same talk with my now-11-year-old son. Change starts with us standing up and speaking up.

Xu Jing is an affiliate assistant professor at the University of Washington’s Department of Anthropology.