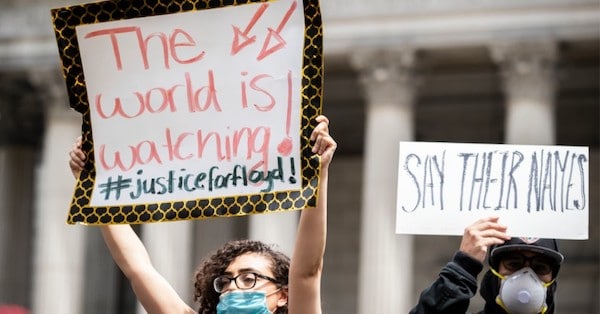 A panel of international human rights experts on Tuesday called on the International Criminal Court in The Hague to investigate police violence against Black Americans, after releasing a searing 188-page report regarding the killings of George Floyd, Breonna Taylor, Eric Garner, and countless others by law enforcement officers.

The commission said the police killings of people of color in the U.S. constitute “crimes against humanity,” a finding it came to after hearing the testimonies of victims’ families at virtual public hearings held earlier this year.

“We are in the midst of a humanitarian crisis,” Emily Galvin-Almanza, founder of Partners for Justice, tweeted after the report (pdf) was released.

Good morning, we are in the midst of a humanitarian crisishttps://t.co/5WtrjAygMZ

“The world is not only watching, it’s judging,” wrote historian Dr. Paula Lee.

The decision to label police killings as crimes against humanity “was not given lightly,” Hina Jilani, one of 12 commissioners and a pioneering Pakistani human rights lawyer, told The Guardian.

We examined all the facts and concluded that there are situations in the U.S. that beg the urgent scrutiny of the ICC.

To constitute crimes against humanity, a crime must be widespread of systematic and must be the result of policy, meaning “a State or organization intends to carryout an attack against a civilian population, whether through action or deliberate failure to take action.”

Experts from 11 countries formed the Commission of Inquiry on Systemic Racist Police Violence last year after the families of several Black Americans killed by officers petitioned the United Nations to investigate the country’s epidemic of violence.

Under pressure from the Trump administration, the U.N. Human Rights Council declined to focus its inquiry on the U.S., which led the International Association of Democratic Lawyers, National Conference of Black Lawyers, and National Lawyers Guild to conduct their own investigation.

The commissioners heard the stories of dozens of victims, including: Michael Brown, whose fatal shooting by Officer Darren Wilson in Ferguson, Missouri led to a wave of racial justice demonstrations in 2014; 12-year-old Tamir Rice, who was killed after holding a toy gun in a Cleveland park that same year; and Freddie Gray, fatally injured while in Baltimore police custody in 2015.

The testimonies led the commission to conclude that:

Jilani told The Guardian that the panel found the testimonies to be “extremely distressing.”

“This country, which claims to be a global champion of human rights, itself fails to comply with international law,” she told the outlet, adding that the families’ stories made it clear that “this was no longer an account of individual trauma, it was an account of trauma inflicted on a whole section of the U.S. population.”

In its report, the commission called on the U.S. government to:

The commission expressed hope that an investigation by the ICC would force the U.S. government to “support much-needed change,” The Guardian reported.

“We felt that the U.S. would benefit were individual police officers further deterred from resorting to unjustified force, knowing that some kind of international criminal responsibility might be held against them,” Jilani told the outlet.