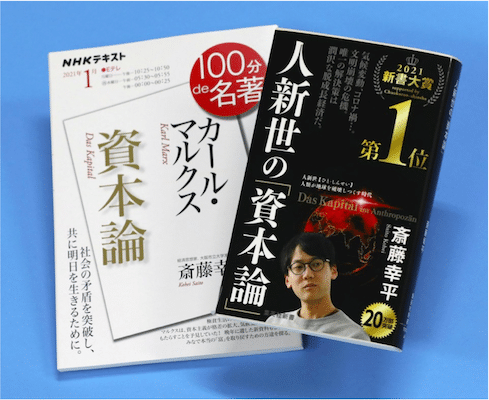 wo recent books, including bestseller “Capitalism in the Anthropocene” (R), released by Kohei Saito are pictured on April 14, 2021. (Kyodo)

As the global challenge of climate change mounts and the coronavirus pandemic magnifies economic inequalities, Karl Marx, who pointed to the contradictions and limitations of capitalism, is gaining new admirers in Japan, particularly among the young.

The boom has been ignited by a 34-year-old associate professor at Osaka City University who reimagined the theory expounded in the 19th-century German thinker’s seminal “Das Kapital” from the perspective of environmental conservation in a bestselling book published last September.

In it, Kohei Saito argued that the realization of sustainable development goals set by the United Nations is as impossible as “drawing a round triangle” under modern-day capitalism.

The success of the book resulted in an invitation from Japan’s public broadcaster NHK to present a commentary on Marx’s foundational theoretical text, known by its full title in English as “Capital: A Critique of Political Economy,” on a program aired in January.

“Many people noticed the contradictions of capitalism when they saw only socially vulnerable people struggling during the coronavirus pandemic,” Saito told Kyodo News in a recent interview.

Younger people, who have no memory of the Cold War or the mass student protests of the 1960s, showed a strong interest in the ideas Saito discussed in the program. Letters poured in from those in their 20s and 30s to NHK Publishing Inc., which had released Saito’s simplified textbook version of Marx’s difficult-to-read work in the lead-up to the broadcast.

One single mother wrote about moving from the city to the countryside, where she now relishes her new life as a farmer. “I wanted to put into practice a transition away from the values of mass consumption,” she said.

Saito presents a theory of “degrowth communism” inspired by Marx, in which he argues that society can stop the perpetual cycles of mass production and mass consumption under capitalism by pursuing a more humanistic path prioritizing social and ecological well-being over economic growth.

The book’s success has inspired a renaissance of interest in Marxist thought.

The main branch of bookstore chain Maruzen in Tokyo’s Marunouchi district has opened a special section entitled “Reviving Marx.” Nobuya Sawaki, who is in charge of the Marx book corner, said, “The demands of people shuttered away at home due to the coronavirus are driving them to pick up these difficult titles on humanity.”

Born in Germany in 1818 as capitalism was emerging, Marx aimed to uncover the economic underpinnings of the capitalist mode of production in “Das Kapital,” the first volume of which appeared in 1867.

Marx analyzed a society in which the exploitation of workers and environmental destruction was becoming more and more severe and predicted catastrophe as a consequence.

He makes use of an expression initially from French, interpreted as, “When I am dead the flood may come for aught I care,” in cynically describing the arrogance and selfishness of the capitalist who sees before him only immediate profits while caring nothing for the future after he is gone.

In modern times, influential thinkers such as the late anthropologist David Graeber and economist Thomas Piketty point to the growing chasm in which wealth is concentrated in the hands of the top 1 percent as if it is a sign of an impending “flood.”

Others, meanwhile, like journalist Naomi Klein speak of the climate crisis wrought by unchecked capitalism–all in recent works that have become international bestsellers.

As an ecosocialist with an evangelist fervor, Saito expounded his ideas on Marx on NHK’s “A Masterpiece in 100 Minutes,” which gives an expert a forum to explain a famous and often difficult work in four 25-minute segments aired over a month.

Over 250,000 copies of his Japanese book entitled “Capital in the Anthropocene” were published, for which he won the “2021 new book award” selected by editors, bookstore staff, and newspaper reporters.

“Maybe many young people got his book because of the influence of Greta Thunberg, who has accused countries and companies of being involved in environmental destruction,” the book’s editor said.

Winner of the prestigious Deutscher Memorial Prize in 2018 for another book he published in English–translated himself from the original German–Saito argues that Marx saw the environmental crisis inherent in capitalism but had left his critique of the political economy unfinished.

Marx, in his later years, Saito argues, was keenly aware of the destructive consequences for the environment of the capitalist regime. Saito describes the ecological crisis tendencies under capitalism using the key concept of “metabolic rift.”

“We have reached the limit of passing the buck to the future,” Saito said, suggesting that he is an advocate of the “3.5 percent rule” of small minorities bringing about social, economic and political change through nonviolent protests.

“If 3.5 percent of the population rises up nonviolently, society will change. I want to encourage action,” Saito said.