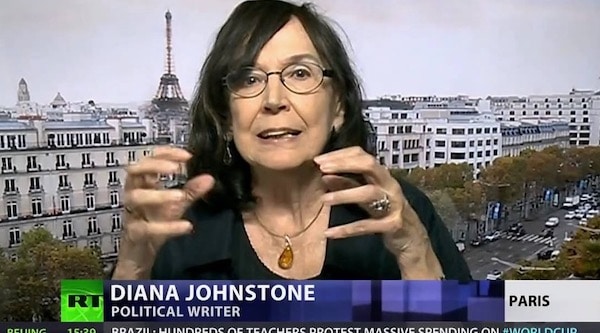 The Green Party in the U.S. is also a pro-peace party–but that’s no longer the case in Germany.

Ann Garrison: Diana, the German Greens are leading in the polls, heading into Germany’s federal elections in September. So Chancellor Angela Merkel may even be replaced by the Greens’ candidate Annalena Baerbock. However, the last time I looked, the German Greens were calling for a rewrite of the UN Charter to take away Russia and China’s power to veto wars proposed by the U.S. and its European allies on the UN Security Council.

Diana Johnstone:  Yes, you’re right about that. And a lot of other things too. I’m sorry to be the bearer of bad news to the American Greens, but if they haven’t been following the evolution of Greens in Europe, especially Germany, they are in for an unpleasant surprise. The Greens are now practically the most warlike party in Europe. They have completely adopted the faux human rights rejection of Russia and China, and if this particular Green candidate should actually become the next German Chancellor, she’s likely to be much worse than Angela Merkel or Armin Laschet, the Christian Democratic Union candidate.

AG: Explain the role that the Nordstream-2 natural gas pipeline under construction between Russia and Germany is playing in this.

DJ:  The Nordstream-2 pipeline is really a symbol of the whole problem. Normally Russia and Germany are a natural fit for economic relations because Russia has a lot of resources and Germany has a lot of technology. It’s a natural fit for them to trade with each other. And the Nordstream-2 Pipeline would provide Germany and other countries in Western Europe with natural gas at low rates.

At the present, having given up nuclear power, Germany uses a lot of coal, which is very bad for the environment. The natural gas would actually be better for the environment and for a good price. But the United States is absolutely determined to block this because they say it will give Russia influence over Germany, which is quite a joke, considering the massive influence that the United States wields with its trade and its NATO influence on every possible level, including levels you don’t even see.

And one of those levels is of course, choosing Europe’s political leaders. These young leaders programs at various institutes pick out who will be a young leader of tomorrow for Europe, then bring them to the States and indoctrinate them. And lo and behold, these people become European leaders. This young woman now leading the German Greens, who has seen an astonishingly rapid rise to the top of the German Green Party, is precisely one of these young leaders whom the U.S. foreign policy establishment has more or less trained for the job.

AG: In your latest piece for Consortium News, Washington’s Green Branches in Europe, you portray Europe more or less as an American colony.

DJ: Well, I’m afraid it is. I have spent the last 50 years here, hoping that Europe would stand up against American imperialism. But in fact, year by year, that hope dwindles more rapidly. Oddly enough, Europe is now more subjugated than ever. And part of it is because they made Trump out to be such a monster and now Biden is back! Oh, wonderful! The European press can’t stop applauding. How great America is back! The moment when you thought maybe the Europeans disliked Trump so much that they might take an independent stance has passed.

AG: And the U.S. wants Europe, Germany in this case in particular, to buy their fracked, natural gas condensed into LNG, then shipped across the Atlantic, and very dangerously decondensed, right?

DJ: Well, yes, but that’s not the whole story. Of course that’s the economic motive. But I think the main motive is political hegemony because the United States uses Europe as its excuse to be the head of the international community. And you have to realize that the United States is now running a real offensive to, I think, overthrow the government of Russia. They make up every possible excuse to separate Western Europe from Russia. And part of this is not just to sell Europe more gas and whatever, but also to destabilize Russia, make Russia collapse so that the United States can run Russia the way it did with Yeltsin. In the 1990s, when the drunken Yeltsin was in power, the United States was pretty much dictating to Russia, and they enjoyed that so much that they want to get it back.

AG: What would be the penalty to Europeans if they refused to comply?

DJ:  Well, that isn’t even the issue. I think people don’t realize the extent of which Germany in particular has quite literally been a militarily occupied country since 1945. The United States occupies Germany, Italy, and some others that don’t matter quite so much like Belgium, militarily. They have huge bases there. They have nuclear weapons there. They have bombers there that could fly over and bomb Russia from Western Europe.

France managed to get NATO out of the country back in the 1960s, so France is a little less militarily occupied, but the United States treats all of Western Europe like occupied countries. Psychologically, It works. The leadership is just so used to the United States being in charge.

AG: How did this happen to the German and French Green Parties? And has it happened to other European Green Parties as well?

DJ: Well, the other Green Parties aren’t as significant as the German Green Party. And sorry, but to try and explain how this happened, I have to put in a plug for my book, Circle in the Darkness.

AG: Please do. I’ll put in a plug too. Read Diana’s memoir, “Circle in the Darkness: Memoir of a World Watcher.” highly recommend it.

DJ: I explained what’s happened to the European left during the past 50 years as well as I could in my book. And in particular, what happened to the Greens because I worked for the Greens in the European Parliament for four, five, six, seven years. And I recount stages in the transformation of the German Greens from the main peace party to the main war party. I saw this happening and it’s a rather long story, but that is what has happened.

And the key moment was the 1999 bombing, the NATO bombing of Yugoslavia, when a German foreign minister from the Greens took both Germany and his party into that war. He directly transformed the Greens into a party championing war for the sake of human rights, much like Samantha Power.

We must go bomb some country to prevent genocide, they tell us, except in the one case of where there really was a huge slaughter, which was in Rwanda. There the United States chose to stay out, and even had UN peacekeepers withdrawn, so that their guy—Paul Kagame—could seize power.

But it’s very easy to go in when there isn’t any genocide and say you went in to prevent this genocide, which was never going to happen, as in Kosovo and in Libya. And these are two cases of this so-called humanitarian intervention that simply destroyed countries that the United States wanted to destroy and give NATO its new mission.

In order to keep control of Western Europe after the Soviet Union collapsed, the United States had to preserve NATO, which is the way the United States controls Europe. So, in order to preserve NATO, they found a new mission, which is humanitarian warfare. The Kosovo war was an example of that. It transformed NATO from a defensive force into an offensive force with a humanitarian mission. That was the purpose of the Kosovo war. And the German Green Party’s foreign minister, Joschka Fisher, was the prophet of all that.

AG: And that was the subject of one of your other books, “Fool’s Crusade,” right? Could you remind us of the full title?

DJ:  Fool’s Crusade: Yugoslavia, NATO and Western Delusions. The United States did everything to promote that war and used it to transform NATO into an offensive rather than defensive force.

AG: I think the Canadian Greens share the German Greens’ commitment to “R2P,” the doctrine that we have the “Responsibility to Protect,” to intervene, aka go to war, to stop genocide. Does this leave the U.S. Greens as the only radical Greens in the world?

DJ: Well, I think it probably does. And there are reasons for that. And if I may be a bit cynical, one reason for that is that there is no possibility of coalition government in the United States system. It’s a two-party system. So the American Greens are innocent of even any temptation to be in power. There’s no way for them to sell out because nobody will buy them; there’s no coalition that they could enter into.

Germany is a coalition government. So if you compromise here and compromise there, you may manage to get into government. That’s how Joschka Fischer, who began as an uneducated leftist streetfighter, became the German Foreign Minister with American approval. The Americans knew that he would do just what he did, which was to transform the German Greens into a war party. In the United States, no Green has ever been tempted to become a foreign minister because the Greens aren’t a peace party so threatening to the system that they can sell out. The American Greens are too marginal.

AG: Well, it’s interesting to see the Washington Post, the New York Times, and Politico praising the German Greens after portraying the U.S. Greens as the devil for so long—the devil who gave us Bush and Trump. The Times wrote, “Germany’s Greens are expected to be a critical part of any new government. But these are not the Greens of old. Today it is a pragmatic party promising an assertive stance abroad.”

DJ: Of course, that proves the point that the American Greens are still faithful to their principles and critical of U.S. wars. So of course they’re the devil, but German Greens echo the American foreign policy line, and the Washington Post and New York Times just love them for it.

AG: I think this is going to be bad news here, where some Greens were actually trying to find a little hope in the polls indicating that the German Greens might come out on top in the German federal election.

DJ: Frankly, I hope they don’t because they are the most dangerous when it comes to foreign relations. This woman—Annalena Baerbock—she has no real political past. She’s 40 years old, and she hasn’t even been in the party very long. She has very little experience, but she’s well trained in American and NATO foreign policy. And she has been rapidly shoved to the top of the party, becoming a candidate for Chancellor simply on the basis of that. So in fact, people who are really on the left in Germany consider her and the German Green Party extremely dangerous. They’re most likely to stumble us into a major war between world powers.

Diana Johnstone is the author of Fool’s Crusade: Yugoslavia, NATO and Western Delusions , Circle in the Darkness: Memoir of a World Watcher , Queen of Chaos: The Misadventures of Hillary Clinton, and many articles published in In These Times, Counterpunch, Consortium News and other outlets. From 1990 to 1996, she was the press secretary of the Green Group in the European Parliament.