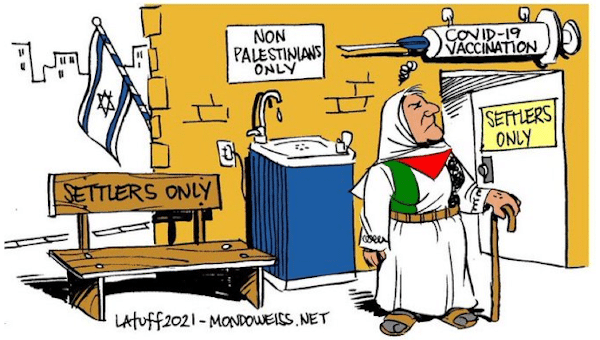 Independent Jewish Voice Canada (IJV) has applauded Human Rights Watch and B’Tselem for declaring Israel an apartheid state in its treatment of Palestinians. However, neither organization included medical apartheid in its charges. Though their statements were reported worldwide, the publicly funded Canadian Broadcasting Corporation (CBC) refuses to publish any information critical of Israel.

Canada has a long history of humanitarian hypocrisy with regard to racial and ethnic discrimination. During World War II, “none is too many” referred to European Jewish refugees fleeing from Nazi Germany who were refused admission and sent back to Germany. Yet on April 15, 2021, Israel Independence Day, Prime Minister Justin Trudeau stated,

For over 70 years, Canada and Israel have been close friends, steadfast allies, and partners in many international organizations. Our personal ties and common values unite us, including our commitment to freedom, democracy, and the rule of law.

Leaders of all Canada’s political parties unequivocally support Israel: Canada was the only country on the UN Human Rights Council to vote against a ceasefire in Israel’s illegal, disproportionate attack on Gaza in 2008/09; former Liberal Party leader and renowned ethicist Michael Ignatieff stated that he did not lose sleep over Israel’s massacre of a Canadian family fleeing Israeli bombardment and went on to defend the use of torture in international law if it prevented a greater evil; and Canada has extensive weapons/surveillance and security agreements with Israel.

For updates on the current Covid situation in Palestine, refer to Dr. Alice Rothchild of the Jewish Voice for Peace Health Advisory Council.

At the international level, there are innumerable collective and individual demands to end medical apartheid, challenging (1) nation states for their apartheid practices contravening international law, particularly as they affect the social determinants of health; the UN has been ineffective in implementing the Apartheid Convention, a “crime against humanity”; and (2) intellectual property rights over vaccine patents, and the power of the unelected World Trade Organization (WTO), which met on May 5 to make this life/death decision affecting millions of people worldwide. COVID-19, as of April 2021, has killed 2.5 million people. In Canada, the federal government decided to draw on a supply of coronavirus vaccines from COVAX, a World Health Organization program designed to help some of the world’s poorest countries access more affordable vaccines. While other countries, like New Zealand and Singapore, similarly received vaccines from COVAX, Canada won the distinction of being the only G7 country to dip into the fund.

In an April 24, 2021 letter to Prime Minister Justin Trudeau, Ontario medical students state: “Clearly, the unprecedented rapid and global scientific progress has been made at the expense of low- and middle-income countries (LMICs)… Canada has joined some high-income countries and has not supported the IP waiver.” Petition e-3181 (Health) was read into the parliamentary record:

We, the undersigned, people of Canada, call upon the Government of Canada to support the proposal from India and South Africa for a waiver from certain provisions of the TRIPS Agreement for the prevention, containment and treatment of COVID-19 at the WTO TRIPS Council without delay.

Pharmaceutical patents fall under the WTO Trade-Related Aspects of Intellectual Property Rights (TRIPS), meaning that access to this life-saving vaccine falls to a small group of people whose sole mandate is to protect and ensure the free flow of capital. These unelected decision-makers never advocate for the free flow of refugees, for children trapped in ICE, for slaves on cargo ships, for intellectual ‘property’, or for life’s necessities like potable water.

Judith Deutsch is a member of Independent Jewish Voices, and former president of Science for Peace. She is a psychoanalyst in Toronto.