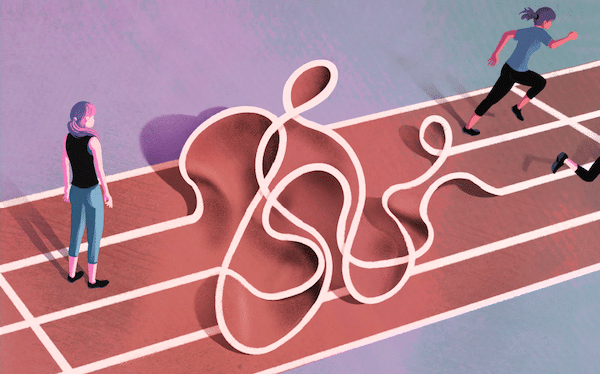 In Media Framing, Trans Kids Are Problems to Be Solved—Not People With Rights

As states continue to pass laws that dehumanize and endanger transgender kids, the country’s most influential newspapers have not met the challenge of covering the issue. Across the country, 36 states have introduced or passed 127 bills that discriminate against trans kids, including barring trans kids from playing on the sports team that corresponds with their gender, and criminalizing or impeding providing gender-affirming healthcare for them. 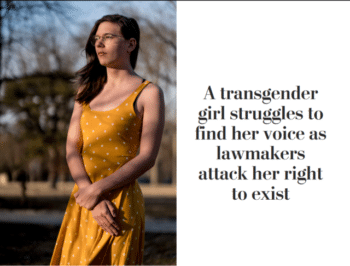 The emphasis in this Washington Post profile (3/16/21) was on Chloe Clark and not on the lawmakers who deny her right to exist.

Instead of centering trans voices in coverage of these bills that target them, journalists at the New York Times and Washington Post have tended to cover the story as primarily one of political debate, with real-life impacts sequestered into human interest stories in which the political news is secondary, or relegated to a paragraph or two buried under piles of politicians, scientists and transphobes debating whether trans people should be denied basic rights.

For instance, the Washington Post ran a front-page feature (3/16/21) that profiled a transgender teen who “had spoken out on her own behalf, even as conservative legislators in Missouri waged a fight to criminalize treatments for trans kids like her.” Despite the headline’s framing (“A Transgender Girl Struggles to Find Her Voice as Lawmakers Attack Her Right to Exist”), the piece was primarily a human interest piece—a sensitive, empathetic profile that included only a few brief references to the anti-trans campaign and its impact on her life.

Meanwhile, the Post’s most in-depth and prominent article centered on the anti-trans campaign came in its sports section (4/15/21), under the headline, “The Fight for the Future of Transgender Athletes.” Who gets to set the framework for that fight in the article? Not the people at its center. Reporter Will Hobson writes that “the issue of transgender athletes has become the most vexing, emotionally charged debate in global sports.” 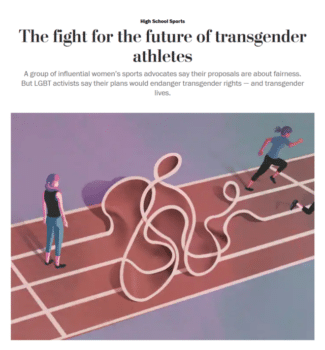 Look at how Hobson defines “the issue of transgender athletes”: not as an issue confronting transgender athletes, who are under attack in more than half of the states in this country, but one posed by them. Hobson implies that what’s most important in this story is that it’s “vexing,” not to trans people, but to those who are forced to deal with their existence. Under that definition of the problem—the same one used by the right-wing activists doing the attacking, and based primarily on interviews with cisgender “experts”—Hobson’s piece concludes that there simply may be no fair solution.

“It may prove impossible for schools and sports organizations to craft policies that are both fair to all female athletes and fully inclusive of transgender girls and women,” he writes. In other words, inclusion of trans girls may be fundamentally unfair to cis girls.

In effect, this cedes the framework to the right, setting the issue up as a debate, rather than a story about trans people’s (and, more specifically, trans kids’) right to bodily autonomy and self-determination.

It’s an approach to coverage entirely in line with that concerning another battle over bodily autonomy in this country: abortion. (Not coincidentally, right-wing legislators have also introduced an unprecedented number of state-level abortion restrictions this year.) As Janine Jackson (FAIR.org, 1/29/16) has argued, reproductive rights are typically presented as political controversies or pawns in the “culture war,” rather than as issues of women’s health, tilting the playing field from the outset in favor of the right. In both cases, those not targeted by the policies—men in the case of reproductive rights, and in the case of trans rights, cisgender people—get most of the quotes and most of the bylines.

For trans people, the outnumbering tends to be even worse. While there are countless outstanding trans journalists, very few have been hired by major news outlets, where their perspectives and access to the trans community would go a long way to providing more fair coverage. And trans sources continue to be outnumbered by cisgender sources in nearly every story about trans issues, too often reserved for adding “color” to a story rather than treated as experts. As the Trans Journalist Association advises:

When reporting a story about trans issues, trans people should be interviewed and quoted as experts, not just subjects. Trans people are the experts on trans lives and experiences.

Of 17 sources quoted in Hobson’s Post piece, three were identified as current or former transgender athletes. One was not interviewed, only briefly quoted. At least three cisgender former athletes were also quoted, plus a dizzying array of experts: endocrinologists, a cultural anthropologist, lawyers and a psychiatrist. 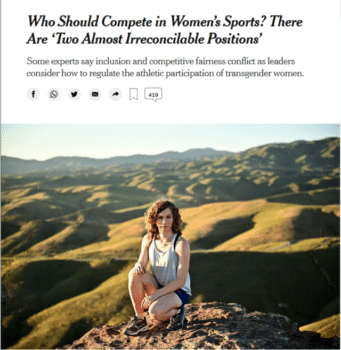 Vilain, once an ally to intersex activists, has also been sharply criticized by both intersex and transgender advocates for his influential stances on genital surgery for intersex babies (acceptable in some circumstances) and testosterone limits for women competing in the Olympics (he helped set them). Why does this scientist with a chip on his shoulder about political correctness, and views hostile to those of the trans and intersex community, get to frame the subject of how trans kids get to participate in sports?

Just like the Post, the Times found the question of trans participation “vexing,” presenting trans people as objects rather than subjects in the matter. Fifteen sources were quoted; four were trans athletes, but none appeared to have actually been interviewed by the Times. (The paper reprinted public statements or quotes from other news outlets.)

Further down in the lengthy piece, a section header was given over to another cisgender scientist playing he said/she said: “‘One group prioritizes inclusion. Another group says we want fairness and safety.’” Though “safety” was mentioned four times in the article as some sort of reason to bar participation, nowhere did it explain how trans kids pose any safety threat to other kids. In fact, the central safety issue in the context of trans kids in sports is the danger to trans kids as a result of being stigmatized, harassed and excluded—which the article failed to mention.

If you dig deeper to discern what exactly the vexing problem is that transgender athletes supposedly pose to others, it appears that many are worried that, because testosterone can confer some physiological advantages on individuals in terms of things like height and muscle mass, it therefore creates an unfair advantage to those with more of it.

But, just like sex, testosterone is not binary; everyone’s body produces testosterone, and while most men produce far more than women, some women produce more testosterone than some men. Rather than accept this human variety just as we accept that all top athletes are exceptional in some—often genetic—way, some world sports organizations have insisted that female athletes whose bodies happen to produce high levels of testosterone medically lower their testosterone levels, regardless of whether it is medically indicated (Wired, 5/11/19). 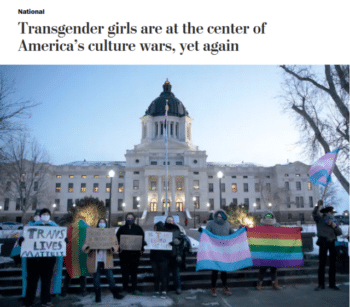 If “transgender girls are at the center of America’s culture wars,” they’re not at the center of this Washington Post piece (1/29/21); only one trans girl is quoted, in the article’s very last paragraph.

An earlier prominent Post piece (1/29/21)—”Transgender Girls Are at the Center of America’s Culture Wars, Yet Again”—similarly failed to put those girls at the center of its reporting. The piece featured 11 sources, only one of which was identified as a trans athlete. She was the very last source in the article. More Republican politicians were given space to opine than trans people, giving a platform for transphobic and sexist comments, such as this quote from Tennessee state Rep. Bruce Griffey, whose stake in this matter is that his cisgender daughter plays high school golf: “What if one of the boys is not doing well, so he pretends to be transgender to win?” Or South Dakota Rep. Fred Deutsch:

This is not a hate bill. It’s about biology. It’s science. You can’t change your sex.

The Post’s reporting isn’t always quite so cringeworthy. A more recent piece (4/24/21) about the Arkansas law banning gender-affirming healthcare for transgender children focused on the families with trans kids impacted by the law, giving them more space than supporters of the bill—though still, no trans people themselves were quoted.

The only front-page New York Times article (3/29/21) this year about the current trans bill battle, “Why Transgender Girls Are Suddenly the GOP’s Culture-War Focus,” was similar. The subhead re-emphasized the headline’s framing of the issue as “a culture clash”—a craven choice of terms for what is in fact a targeted political attack on the humanity of a group that currently makes up 1–2% of the population. The piece quoted or paraphrased seven individuals or groups; none were trans athletes, and only one—ACLU lawyer Chase Strangio—was identified as transgender, period.

The paper has only covered this year’s legislative campaign four times in print. Notably, two of the pieces have been interviews: one with transgender Virginia state representative Danica Roem (4/17/21), and the other with Arkansas Gov. Asa Hutchinson (4/8/21), who signed into law bills barring trans girls from playing girls’ sports and allowing doctors to refuse to treat trans patients, then vetoed a bill that would prohibit gender-affirming healthcare for trans kids. (That veto was later overridden by the GOP-dominated legislature, enacting the country’s most extreme anti-trans law so far.)

Though they carried different bylines, it’s hard not to see the two interviews as an editorial attempt at balance—in which a trans lawmaker is balanced by a slightly-less-horrifically-transphobic-than-his-colleagues lawmaker. Trans kids—and the rest of the papers’ readers—deserve much better.