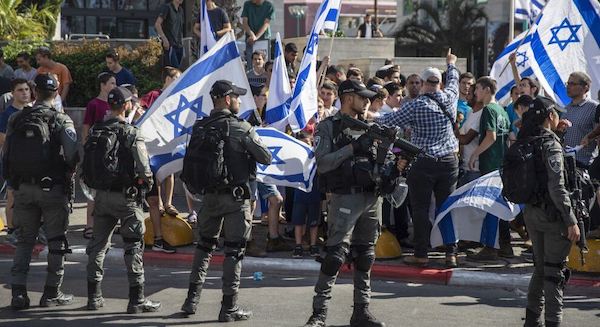 Editor’s Note: The following call was originally published on Facebook by DAM, a Palestinian hip-hop group from Lydda (Lod).

From the Palestinian community in Lydda, including DAM: International protection now for the Indigenous Palestinians from Israeli state-sanctioned pogroms!

We, members of the Palestinian hip-hop band DAM, living in Lydda (Lydd), survived with our brothers & sisters in Lydda, Ramla, Haifa, Jaffa, Akka and elsewhere, a racist attack by far-right Israeli extremists last night. We join the majority of our people in calling for immediate international intervention to defend us before it is too late.

In fact, last night, Indigenous Palestinians with Israeli citizenship faced multiple pogroms and lynching attempts perpetrated by Jewish Israeli mobs, with full protection from militarized police forces, and with full encouragement of the Israeli government. These racist attacks against our communities in Jaffa (Yafa), Ramleh, Acre (Akka), Haifa, and elsewhere, are inspired by the April pogrom against our Palestinian siblings in occupied Jerusalem.

Ample visual evidence documents beyond doubt the full complicity of Israeli police forces in these racist attacks. After all, the Israeli government, which treats us not just as second-class citizens but as dispensable sub-humans too, has overtly supported and justified these assaults.

In April, Human Rights Watch (HRW) concluded in an extensive legal analysis that the entire Palestinian people is living under one system of Israeli apartheid. HRW has thus joined many Palestinian human rights organizations and advocates who have been exposing this apartheid reality for decades. Israel’s leading human rights organization, B’Tselem, had reached a similar conclusion earlier this year in a report titled: A regime of Jewish supremacy from the Jordan River to the Mediterranean Sea: This is apartheid.

We call on all musicians, artists, cultural workers and people of conscience worldwide to amplify by all means possible our simple demands for:

1. A UN investigation of Israeli apartheid, as recommended by Human Rights Watch and Palestinian civil society.

2. A UN peace-keeping force to protect the Indigenous Palestinian community in Israel from state-sanctioned racist violence, ethnic cleansing and pogroms.

If you are neutral in situations of injustice, you have chosen the side of the oppressor.

Don’t remain “neutral.” Conquer your fear, and stand on the right side of history. Ending all oppression is #InOurHands #SaveSheikhJarrah #Gaza_Under_Attack