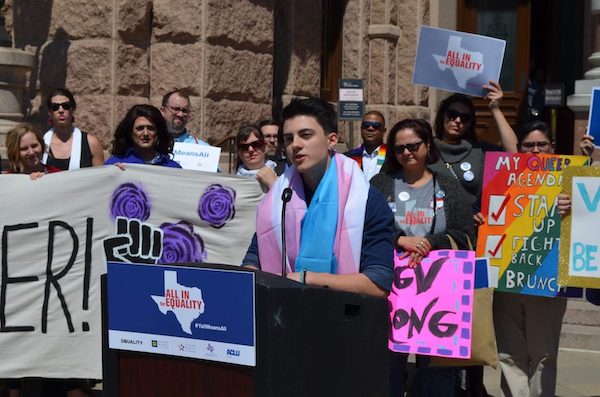 Landon Richie testifying against anti-trans legislation at the Capitol in 2019. COURTESY OF LANDON RICHIE

In 2015, after coming out as transgender at the start of 7th grade, 12-year-old Landon Richie traveled to Austin from Houston with his parents to speak to his representatives about the obstacles he faced as a trans kid. An onslaught of anti-LGBTQ bills had been filed, including ones that would allow businesses to refuse service to LGBTQ people on the basis of religion. “It’s a daunting thing to be so open and vulnerable with your story in front of people you’ve never met, and that are in positions of power,” says Richie, now 18.

At the time, Richie had been participating in Taekwondo for seven years, with instructors that supported him through his transition. He played the trumpet in the honor band and he used graphite and colored pencils to draw portraits and still lives, even winning a state art competition. But more and more of his time became consumed by advocating against anti-trans legislation in his home state.

In high school, instead of worrying about Friday night football games, Richie says his attention was on fighting for his rights at the Capitol. In 2017, he returned to Austin to testify against the “bathroom bills,” which would have banned trans people from accessing restrooms and locker rooms that matched their gender identity. He was also vocal about his opposition on social media, and as a 14-year-old, started “receiving death threats from adults on the internet, detailing the ways that they wanted to see my family die,” he says.

It affected my focus in class and how I felt about myself, even though I knew that none of what these people were saying was true.

For six years and four legislative sessions, Richie has had to defend his rights to public accommodation and non-discrimination. Now a freshman at the University of Houston, Richie, along with other trans youth and their families, continues to fight an even more aggressive array of anti-trans bills introduced at the Texas Capitol.

“[It’s] overwhelming when you are told session after session that you’re not protected or cared about by the state of Texas,” Richie says.

There’s no genuine concern about the safety or well-being of kids that the authors and supporters of these bills often talk about. It’s purely a political game, and trans kids are caught in the crossfire.

A record-breaking wave of anti-LGBTQ bills have been introduced by state legislatures across the country, with 17 enacted so far this year, according to the Human Rights Campaign. With more than 20 bills, Texas lawmakers filed the most anti-LGBTQ legislation of any state this year, the majority of them attacking trans youth. Families say that the persistent attacks on trans kids in recent years have taken a mental and emotional toll on them every legislative cycle, whether or not the measures ultimately pass.

With less than two weeks left in the legislative session, anti-trans bills are still making their way through both chambers. Although House Bill 1399, which would ban doctors from providing gender-affirming health care to transgender children, effectively died before being considered by the House deadline last week, a similar measure, Senate Bill 1311, was approved by the Senate this week and can still pass before the session is over. The ACLU of Texas and Lambda Legal plan to sue the state of Texas if the measure is signed into law, following an announcement by the Biden administration that it will protect transgender people from discrimination in health care. Meanwhile, Democratic Representative Harold Dutton, chair of the House Public Education Committee, revived and helped pass through his committee Senate Bill 29, which would ban trans children from participating on public school sports teams based on their gender identity, in apparent retaliation against other Democrats for not passing one of his bills. It’s awaiting scheduling for a full House vote.

“Even if these bills don’t pass, the damage is done,” says Amber Briggle, a Dallas-area small-business owner, who has been publicly advocating for her 13-year-old trans son, Max, since 2016, when a candidate for the local sheriff made disparaging comments about trans people on Facebook.

These kids are shook.

At this point in the legislative session, Briggle says she’s “fucking tired.” Her house is a mess, she’s not sleeping, and sometimes she forgets to eat.

I vacillate between hope that we can kill these bills, and sheer terror that we won’t. 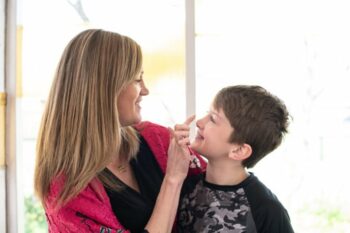 Briggle testified at the Texas Capitol for the first time in April against Senate Bill 1646, which would deem her and her husband “child abusers” for consenting to gender-affirming care for Max, and could allow CPS to remove him from their custody. The bill would prevent trans youth under 18 from accessing puberty-blockers—reversible medication to delay unwanted physical changes during puberty—hormone therapy, and gender-affirming surgery.

It wasn’t an option for Briggle not to make the seven-hour round trip to Austin to testify; the bill’s fate could determine whether or not her family can stay together, and “whether her son lives or dies,” she says. Studies show trans adolescents deal with more stress from social stigma and discrimination, and as a result, have a higher risk of depression and suicide.

As she prepared her testimony, Briggle says her husband reminded her that the majority of senators on the Senate Committee on State Affairs weren’t really going to listen. So Briggle aimed her testimony at their constituents instead. It worked, for better or for worse. As a result of a now viral video of her testimony, someone called her business and left multiple threatening voice messages listing all the ways she should kill herself, leading Briggle to file a police report.

While some families contemplate moving out Texas, it’s not an option for Briggle and her family. Her husband is a tenured professor and she has an established small business. Even if the family decided to leave, 32 other states have introduced more than 100 bills aimed at trans people. “Where exactly am I going to move that’s safe?” Briggle says.

Kimberly Shappley uprooted her life once already, in 2018, for her now 10-year-old trans daughter, Kai. In 2017, when Kai was in kindergarten, her school in Pearland, outside Houston, prohibited her from using the girl’s bathroom and only allowed her to use the one in the nurse’s office. Kimberly testified against the “bathroom bills” that year while Kai sat on her lap, and their story was told in an Emmy-award winning documentary. The bills didn’t end up passing, but the situation at school became so unbearable that the family moved to Austin, where they found a more supportive school.

Kai also testified against SB 1646, and a video of her testimony went viral. “It makes me sad that some politicians use trans kids like me to get votes from people who hate me just because I exist,” she told lawmakers in April. “God made me. God loves me for who I am and God does not make mistakes.” She’s been harassed online so much since that Kimberly says she had to keep Kai off social media.

Melody Gomez, an El Paso social worker and the facilitator of Trans-Youth Coalition, a youth-led organization that provides free and low-cost resources to trans youth, says many of the Latinx kids she works with face discrimination both outside the home and from their own community, because of “deeply rooted machismo and tradition, especially in regard to faith-based values.” A mother of two trans children, Gomez says the proposed legislation reinforces this discrimination and sends the message that her children aren’t viewed as human. Gomez, who is queer, testified against SB 1646 on behalf of her kids, Judy, who is 8 years old, and Sky, 22.

“It just makes sense to me to try and fight as much as possible, because the more that we run from it, the more it’s just going to follow us,” Gomez says of the anti-trans legislation.

I’m not going to stop supporting my [children]. … To me, policy does not equate to morality.