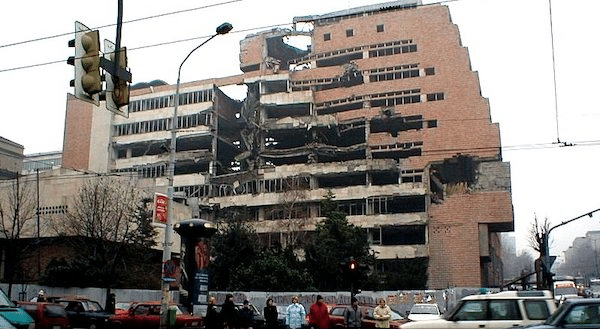 Twenty-two years ago today the Federal Republic of Yugoslavia was subjected to the 55th straight day of bombardment from the then 19-member North Atlantic Treaty Organization, with 23 days more to go. Many families in Belgrade, Novi Sad and Niš daily fled to bomb shelters during the aerial onslaught. The permanent trauma inflicted on millions of civilians, especially children, is perhaps impossible to calculate. And it has been denied or ignored by Europe and the world. As forgotten as the cluster bomb fragments and depleted uranium left behind by NATO’s “humanitarian intervention.”

The air war was justified by U.S. President Bill Clinton, British Prime Minister Tony Blair and NATO Secretary General Javier Solana as a noble crusade to stop, to employ an expression not uncommon at the time, the “worst genocide since Hitler” in the Serbian province of Kosovo. The operation, Operation Allied Force for NATO, Operation Noble Anvil for the U.S., began with a barrage of Tomahawk cruise missiles fired from ships and submarines in the Adriatic Sea. In all over 1,000 NATO military aircraft flew 30,000 combat sorties over a nation of slightly more than 10 million people, two million of those in Kosovo; a military bloc whose combined population at the time was some 850 million and which included three of the world’s nuclear powers.

During the war, arguably the most lopsided since the U.S.’s invasion of Grenada in 1983, American and other Western officials maintained a steady drumbeat of increasingly hyperbolic, and criminally unconscionable, claims of ethnic Albanians in Kosovo killed by Yugoslav forces. On May 16 Defense Secretary William Cohen appeared on Face the Nation and said: “We’ve now seen about 100,000 military-aged men missing….They may have been murdered.” Almost immediately afterward another American official raised that number to 200,000.

The scare tactics worked, as NATO’s top military commander, General Wesley Clark, was able to continue daily bombing missions over the small nation months after all targets of military value had been hit and hit repeatedly. A passenger train, a religious procession, a refugee column, Radio Television of Serbia headquarters. a vacuum cleaner factory, bridges, marketplaces, apartment courtyards, the Swiss embassy in Belgrade and the Chinese embassy as well, with three journalists killed and 27 other Chinese injured. Cluster bombs, graphite bombs and depleted uranium ordnance were used widely. No one, not a single individual, has been held accountable for those war crimes. Nor for what should be a war crime and one of the most grave at that: intentionally fabricating and exaggerating atrocity stories to agitate for and escalate a war. Few Western politicians and journalists would have escaped that charge over their roles in 1999.

When the Yugoslav government of President Slobodan Milosevic was compelled to accede to NATO diktat on June 10, over 200,000 ethnic Serbs, Roma and other minorities left Kosovo with Yugoslav troops, and NATO and its so-called Kosovo Liberation Army cutthroats–for whom and with whom it waged the war–marched into Kosovo. After the latter arrived even more, perhaps a hundred thousand or more, Serbs, Roma, Turks, Jews, Egyptians, Ashkali and members of other ethnic minority communities, along with no few Albanians, fled the province. Numerous Serbs, Roma and Albanian “collaborators” were murdered in what the Western press invariably described as revenge killings. (During the air war Britain’s Daily Telegraph reported 100,000 ethnic Albanians fled Kosovo to other parts of Serbia.)

The permanent displacement of hundreds of thousands of non-ethnic Albanians from Kosovo and the expulsion of over a quarter of a million Serbs from Croatia in the early 1990s are the two largest cases of irreversible ethnic cleansing in Europe since World War II. Decades later no one has been held accountable for those crimes either.

Most all of the above has been forgotten if it was ever known. That’s how it was planned. While NATO was celebrating its fiftieth-anniversary jubilee in Washington, D.C. and inducting the first new members since Spain in 1986, and former members of the Warsaw Pact at that–the Czech Republic, Hungary and Poland–a high-profile, low-risk war was just the thing to launch new global NATO on the world.

The victim, Yugoslavia, had been mortally wounded; four years later it no longer existed, even on the map. The corpse was expected to rest silently.

But its ghost refuses to disappear. On May 14 Serbian President Aleksandar Vucic, responding to a comment by his Slovenian counterpart, Borut Pahor, to the effect that there should be no redrawing of borders in Europe, said:

“We have a differing view on Kosovo’s independence. When I hear that, as Pahor says, there are no border changes without conflict, I agree, and that should be clear to all who have been generating conflicts and wanted to change Serbia’s borders.” That is a reference to the West–the U.S., European Union and NATO–successfully wrenching Kosovo from Serbia in 2008, in violation of the 1999 Kumanovo Agreement. Vucic backed up his contention that national borders should not be arbitrarily or unilaterally changed by stating that only borders recognized by the United Nations are legitimate. However, he said that a contrary practice had been at work since 1999, the result of “the brutal hypocrisy of Western powers that have no principles, or have principles as needed.”

The Czech leader’s spokesman, Jiri Ovcacec, confirmed that “President Miloš Zeman presented public apologies to President Aleksandar Vucic for the [NATO] bombardments of Yugoslavia in 1999,” and that he “personally asked the Serbian people for forgiveness.”

During the war Prague refused NATO’s warplanes the right to land in Czech territory. Today Zeman himself told the press after his meeting with Serbia’s president:

“We were hopelessly looking for at least one more [NATO] country that would join us and come out against [the bombardments of Yugoslavia]. We remained all alone.” Displaying that rarest of virtues for a politician, penitence, he also said his government should have exercised more resolve in demanding the end of the bombing once it had commenced.

When the Czech Republic joined NATO in 1999 it was accompanied by Hungary and Poland, fellow members of the Visegrad Four group in Central Europe. The fourth member, Slovakia, was not invited because the party of three-time prime minister Vladimír Mečiar was not to the liking of the U.S., NATO and the EU. The following year Mečiar dropped out of politics, with his Movement for a Democratic Slovakia party colleague Augustín Marián Húska disclosing:

The NATO war against Yugoslavia in 1999 was also a signal to us, to not pursue any vision of political independence anymore. We have seen what will happen to forces that want to be independent.

On May 7 the governments of Serbia and China commemorated the NATO bombing of China’s embassy in Serbia in 1999. Serbian Minister of Labor, Employment, Veteran and Social Affairs Dr. Darija Kisic Tepavcevic, head of the Association of Journalists of Serbia Vladimir Radomirovic, Chinese ambassador to Serbia Chen Bo and others laid wreaths in honor of three Chinese journalists killed in the attack.

The Chinese ambassador thanked the Serbian people for keeping alive the memory of the victims who, she said,

paid the price of truth, justice, and righteousness with their lives.

We will never forget the crime conducted by the aggressor, who most brutally violated human rights, in the name of the so-called protection of human rights.

If most of the rest of the world has forgotten NATO’s first war and its bloody emergence on the world stage, China and Serbia have not.

On March 26, to mark the beginning of NATO’s air war against Yugoslavia and Serbia’s Remembrance Day for the Victims of the NATO Aggression, Hua Chunying, spokesperson for the Chinese Foreign Ministry, stated:

China would like to remind NATO that they still owe a debt of blood to the Chinese people….The dead have passed away, but the living need more vigilance and reflection.

It’s worth quoting him further as a reminder that the crime of 1999 has indeed haunted not only Europe but the world ever since it was perpetrated; that what is seemingly past is really both prologue and precedent.

Whether in Yugoslavia, Iraq, Libya or Syria, we should never forget the lives of ordinary people lost to repeated bombardment, the crumbling walls under the shells, the glorious historical sites consumed by the flames.

The U.S. and some Western countries have kept their mouths open about human rights and kept their mouths shut about their responsibilities….When they blatantly launched a war against a sovereign country without the Security Council’s authorization, causing hundreds of thousands of deaths and the dispersal of millions of people, did they ever care about the human rights of the people in those countries? Is this what they mean by international rules? Shouldn’t they be held accountable for their war actions?

Those questions, which had they been asked twenty-two years ago might have spared millions of lives in the nations the Chinese diplomat enumerated and others, need to be asked now and with a passion and insistence hitherto absent.