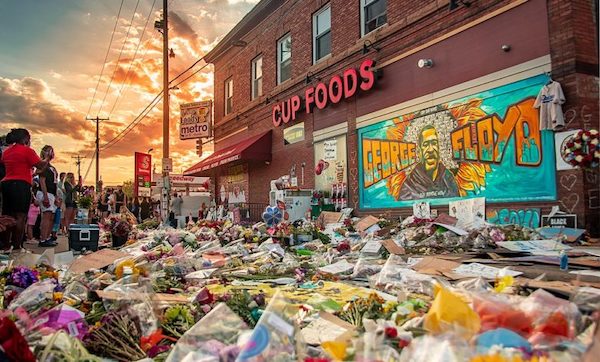 On May 25, 2020, 44-year-old white Minneapolis police officer Derek Chauvin knelt on 46-year-old unarmed Black man George Floyd’s neck for nine minutes and 29 seconds, sadistically murdering him. Floyd was accused of using a counterfeit 20 dollar bill at a local convenience store in the middle of a pandemic that left tens of millions of Americans out of work and deeper in poverty. Floyd was a victim of the capitalist system, one of the tens of millions who were out of employment. The deadly encounter between Floyd and Chauvin was captured on video by community members and went viral shortly thereafter.

The next day, the Black working-class communities of Minneapolis led thousands of people of all nationalities demanding justice and accountability, inspiring a nationwide protest movement against racism and police brutality that brought an estimated 35 million people into the streets in righteous and militant indignation. Solidarity protests were held in 60 countries all over the world from Palestine to Haiti to South Korea and more. As brutal force and thousands upon thousands of arrests were employed to repress the movement, the racist underbelly of so-called U.S. democracy was on display to the entire world.

One year since these rebellions began, many reforms have been passed and changes made to combat racism. Politicians and corporations have pivoted to allay the rage of the masses of people across the country sick and tired of racist police terror and the entire system of capitalism with its disgusting inequality. All across the country organizers, activists and progressive groups have demanded radical change, with some raising the slogan “defund the police” and “abolish the police” — representing a marked shift in the struggle for justice.

Yet, since that fateful day in May 2020, many more people have been killed by U.S. police. Some of these people’s names are widely known, such as Daunte Wright, Ma’Khia Bryant, Adam Toledo and Andre Brown. George Floyd’s murder was the “straw that broke the camels back.” But no matter how much negative attention the police get, as an institution of racist rule by a tiny class of the super-rich, they cannot help but enact all kinds of violence against poor and working-class communities, especially Black communities. The fundamental task of the police is to preserve the racist, capitalist status quo.

In the year since Floyd’s murder, activists all over the country have taken aim at qualified immunity, which shields officers from civil and criminal liability. President Joe Biden met with the Floyd family and other families of police brutality on Tuesday in a push to get the Senate to pass the George Floyd Justice in Policing Act. The bill would impose limitations on the use of police chokeholds, standards for no-knock warrants and limits on the sharing of military equipment by the Defense Department with police departments. Many of these reforms were already on the books in various cities and towns, yet they have not significantly hindered the police from continuing to kill and enact wanton violence on the people. The ruling class is far more reluctant about stripping the police of qualified immunity — their carte blanche to kill, maim, harass and bully. This continues to be an important front of struggle.

The police have been killing people since they were formalized as an organization growing out of the slave patrols in the U.S. South and out of the needs of the capitalist class to police immigrants and low-wage workers in the industrial North. The violence is not new, and many outright murders and assassinations have been captured on camera by civilians. So what is new? What has changed? It is the consciousness of the working class. All of last summer and even into the fall and winter, people continued to rise up against racist police terror and state violence.

As revolutionaries, we know that in order to win basic reforms and so much more, the working class and oppressed people of this country need to be organized. Our class must continue to keep the pressure on through mobilization, education and agitation — drawing in more people to the fight for justice in the immediate sense and also more broadly against racism and capitalism and imperialism. The rebellions have changed the political calculus of the ruling class and thus the terrain of the class struggle.

In the aftermath of the conviction of Derek Chauvin, many debated what more needed to be done to win true justice. While the verdict was a victory secured through arduous struggle, we know that true, enduring justice can only be enjoyed by winning a new system that removes the basis for white supremacy and all the other unspeakable injustices in this society. To honor George Floyd’s memory, millions have and will commit themselves to this task.