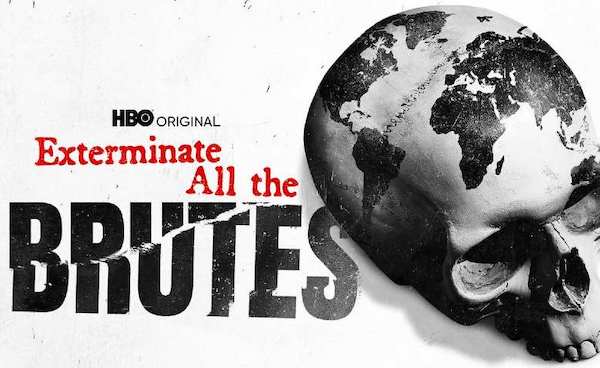 Exterminate All The Brutes

“You already know enough. So do I. It is not knowledge we lack. What is missing is the courage to understand what we know and to draw conclusions.” – Sven Lindqvist, Exterminate All The Brutes, published by GRANTA, 1996

The title of Lindqvist’s book and Raoul Peck’s film is taken from Joseph Conrad’s Heart of Darkness. ‘Exterminate all the brutes’ was the final advice of the isolated white colonialist Kurtz, about how to civilise Africa.

Peck was a friend and collaborator of Lindqvist. His film should be seen as a continuation of his work, not a different media version. Exterminate draws on other works, notably Roxanne Dunbar-Ortiz’s An Indigenous Peoples’ History of the United States.

Peck’s earlier film, I Am Not Your Negro, about the life and work of James Baldwin, was nominated for an Oscar, and hailed as “an advanced seminar in racial politics” by the New York Times. Exterminate may well receive a more hostile review in the mainstream media. Conservative and liberals alike will recoil from Peck’s exposure of glib rhetoric about the USA being founded on liberty and democracy as a blatant lie.

Historical facts and the obligation to engage

History is a subject that benefits from collaboration, discussion and debate. But for historians to be able to argue over their rival interpretations there has to be a common agreement on some essential historical facts.

The facts that Peck concentrates on are already widely known. And, like the truth about the Emperor’s clothes, we all benefit from hearing them said, and said loudly.

Eurocentric history and political discourse is rich in Enlightenment values–all the things that Europeans gave to the world – reason and learning, democracy and law-based government.

Peck’s goal is to destroy Eurocentric self-love. He does not offer a theoretical alternative. His job is to restate the facts. The undeniable facts. The facts that are so fundamental to history, they have been studiously, deliberately and systematically ignored by historians of the status quo.

Exterminate is about engagement with facts. The audience has a job too. They have to interpret the facts. The interpretation is a duty, to oneself and to society.

The art of Exterminate

In a sharp contrast with I am not your Negro, narrated by Samuel L. Jackson, Exterminate is narrated by Peck himself. And the film has various reference points to his life in Haiti, the Democratic Republic of the Congo (DRC) and New York.

Intertwining his own lived experience with the subject of the film has two purposes. Firstly, it tells the audience that he too is obliged to come to terms with the facts. Secondly, Peck had experience of the Duvalier dictatorship in Haiti, backed by US arms, and the US-backed overthrow of Patrice Lumumba in the DRC.

The voice of Peck gives the film, covering centuries of European expansion, a vital authority. In a film of this scope and magnitude, a variety of methods are deployed to hit the emotions and intellect of the audience.

Throughout the four one-hour films important scenes are acted out in a very simple and direct way. The arrival of Columbus, the war against the Seminoles in Florida, the murderous robbing and butchery of the native Congolese by Belgian imperialists, are portrayed in short scenes. Josh Hartnett is the perpetual face of white colonialism in each scene.

Animated drawings offer a simple pictorial statement that is tremendously moving in depicting things like the slave passage from Africa. Statistics, maps and summary slides are constructed to be accessible and hard-hitting.

The foundation of European civilisation, for Peck, was not only about Greek democracy or the Enlightenment. By telling the story of European expansion into the world based on colonialism, slavery and genocide, and in an accessible and popular way, Peck has rebalanced the argument.

Furthermore, Exterminate goes way beyond being just another radical history. The film is absolutely relevant in explaining the hellish features of capitalism in its dotage. It is of the moment, with the current crop of smug, racist political western leaders in Peck’s crosshairs.

White supremacy and the ‘right to bear arms’ is the legacy of the extermination of Indian tribes and slavery. The murder and displacement of Palestinians as I write this review, is the continuation of the US’s Manifest Destiny to remove all native obstacles to ‘civilisation’. Wars for democracy can kill Arabs because European values trump their right to life without hindrance. The physical and cultural obliteration of peoples is a continuum from the Crusades to the present. It is an ongoing part of our world – in China, in Brazil, in Myanmar.

Exterminate is a weapon. Peck wants it to become a learning resource in schools and universities as a means of ending the nightmare. The film lends itself well to the classroom with clips being part animation, part explanation and so on. This is also why Peck is more concerned with raising the question than offering a full theoretical explanation. Marxist theories of capitalism and imperialism might well offer something to fill the gaps.

The extermination of peoples is part of our history. If we fail to acknowledge exterminations we fall into line with the Social Darwinist view that inferior peoples are doomed to die out, and the role of advanced peoples is to help them on their way. Celebrations of, for example, the British Empire often refer to the obliterated peoples and cultures with a footnote. The systematic cheating, pillaging and killing is thereby relegated to a few bad apples, difficulties of communication, cultural disparity and so on. But it was deliberate and calculated.

Possibly the most shocking thing for liberal academics to accept in Exterminate will be the conclusion that the Holocaust had strong European and American antecedents. The roll call of exterminated peoples is a long one–and Peck lists them all. Hitler’s invasion of Eastern Europe and his war of annihilation against Slavs and Jews was to create lebensraum, or living space for German settlers. What was different to the wars of annihilation fought against American tribes? Hitler actually referred to the Slavs as ‘our Redskins’.

Exterminate All The Brutes is an epic documentary, a must watch, a classic. It is a film that is part of making history, a weapon and a rallying point in the war against decaying capitalism that relies on violence and hatred to stay afloat.

Lenin used to say ‘facts are stubborn things’, and we need to be unyielding in confronting our tormentors with the origins and human cost of their misbegotten gains.