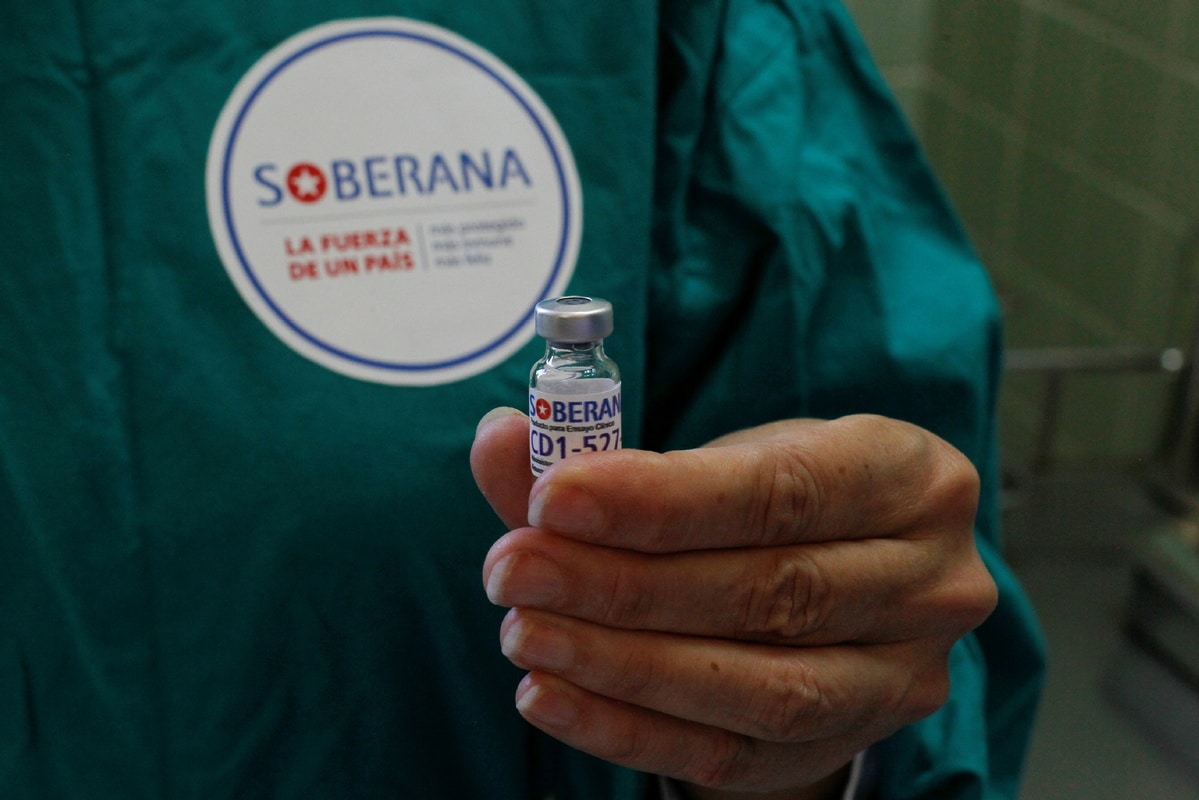 A nurse shows a dose of the Soberana-02 COVID-19 vaccine to be used in a volunteer as part of Phase III trials of the experimental Cuban vaccine candidate in Havana, Cuba, March 31, 2021. “Cuba’s mass vaccination campaign against COVID-19 to start in Havana with homegrown vaccines,” Xinhua, May 10, 2021.

Cuba, the first Latin America country to develop its own COVID-19 vaccines, presently is short of syringes for immunizing its population against the virus. It’s not feasible for Cuba to make its own syringes. The U.S. blockade prevents Cuba from importing them from abroad.

The lack of syringes is a global problem. The New York Times estimates an overall need of between “eight billion and 10 billion syringes for Covid-19 vaccinations alone.” Manufacturing capabilities are increasing, but that’s of no use to Cuba.

The shortage of syringes poses great hardship for the Cuban people. That’s not new. Calling for economic blockade in 1960, State Department official Lester Mallory was confident that making Cubans suffer would push them toward overthrowing their government.

The impact of the blockade is by no means haphazard. Institutionalized processes aimed at asserting U.S. domination involve laws, administrative decrees, regulations, officials’ interpretations of regulations, and caution on the part of third-country traders and financiers.

Authority for the ban on U.S. sales of goods to Cuba stems from legislation accumulating over many years. Then the Cuba Democracy Act of 1992 ensnared foreign companies into the blockade system. That law authorized the Treasury Department to license the foreign subsidiaries of U.S. corporations to export goods to Cuba. It actually created an opening for almost all applications for licensure to be denied.

Since then, the Treasury Department’s Office of Foreign Assets Control (OFAC), enforcer of the blockade, has found leeway to regulate the foreign corporations themselves. Foreign corporations contemplating sales to Cuba contend with U.S. sanctions if they have branches in the United States, partner with U.S. corporations, or handle U.S. dollars.

Most of the world’s syringes are manufactured by three U.S. companies and five companies elsewhere. Each of the latter has ties with a U.S. entity and is prohibited from exporting syringes to Cuba.

For example, Germany’s B. Braun Melsungen Corporation partners with Concordance Healthcare Solutions, “one of the largest independent, healthcare distributors in the U.S.” Tokyo-based Terumo Corporation has a headquarters in New Jersey. Osaka-based Nipro Corporation recently “announce[d] the creation of a Vascular Division in the U.S.” “Healthcare heavyweight Cardinal Health” is headquartered in both Ireland and the United States.

Hindustan Syringes and Medical Devices, in India, came under OFAC purview in January 2021 by virtue of associating with Envigo Global Products as its “digital marketing partner.” Envigo is headquartered in Indianapolis.

Officers of foreign companies presumably seek legal advice. One lawyers’ group maintains that, “OFAC has long held that if a non-U.S. company engages in business transactions in U.S. dollars, the foreign party is availing itself of the U.S. financial system and hence becomes subject to the U.S. sanctions laws.”

Another indicates sanctions are likely if “the foreign party has a requisite level of contacts with the U.S., such as engaging [with] U.S. products, software or technology.” The National Law Review recommends that, “Foreign companies…need to be aware of board members, directors, or employees who hold U.S. citizenship or U.S. green cards.”

The Helms-Burton Law of 1996 required, for the first time, that Congress determine the fate of the blockade. Except for legislation in 2000 allowing U.S. food products to be exported to Cuba, Congress has protected that policy.

In February Oregon Senator Ron Wyden introduced his “United States-Cuba Trade Act of 2021,” which would end the blockade. The bill has four co-sponsors. Senators Amy Klobuchar of Minnesota, Jerry Moran of Kansas, and Patrick Leahy of Vermont reintroduced the “Freedom to Export to Cuba Act” on May 20th. That bill would facilitate U.S. exports to Cuba, especially agricultural products; allow some Cuban goods to enter the United States; and would retain sanctions imposed because of alleged human rights violations.

In March 2021, 80 congresspersons sent a letter to President Biden urging him to use executive action to reverse restrictions imposed by President Trump.

The U.S. economic blockade of Cuba is calculated, systematic, all-encompassing, and savage. Opponents offer varying pleas. For some, the blockade is cruel and illegal. Others call for defending Cuba, because it’s a model both of human solidarity and of how to provide health care and education. Many insist on respect for Cuba’s sovereignty.

These arguments are disconnected, one from the other. Blockade critics appear to lack a central focus on root causes. Having such would be essential, it seems, for fashioning a cohesive strategy. Were that in place, new possibilities might exist for recruitment and unity. Anti-racism struggle in the United States displays similar dynamics, and maybe offers lessons.

Reacting to various symptoms of oppression, defenders of racial equality have gone from pillar to post opposing police killings, an unjust criminal justice system, and Black people’s high poverty and death rates. Now, increasingly, analysts link manifestations of racial oppression with durable systems of repression involving capitalism. Writing about a notorious slave-trading firm, historian Joshua Rothman captures that association in the title of his new book, The Ledger and the Chain.

Similarly, if the campaign against the blockade paid more attention to the long history of U.S. ambition to dominate Cuba, it might gain strength by going to the heart of the matter. The premise would be that the European powers and the United States have long sought to draw Cuba and other dependent Latin American territories into their capitalist orbit.

The syringe story reflects U.S schemes in the 19th century to absorb Cuba, U.S. control of Cuba after Spain’s departure in 1902, and U.S. determination after 1959 to restore hegemony lost to the Revolution.