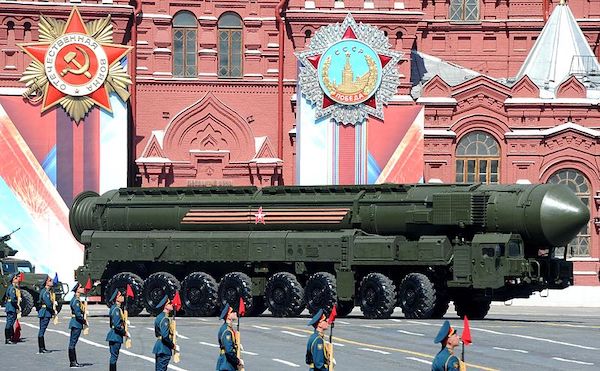 In recent months all U.S. geographical and several other military commands have branded Russia an adversary in all parts of the world, from the Arctic to the Antarctic, from South America to North Africa, from West Asia to Eastern Europe, from cyberspace to outer space.

To demonstrate how comprehensive, how obsessive, the accusation is, here are compendious specimens:

And what is the nation supposedly posing such an existential threat to global peace and security? A country of 145 million people, only 43% of that of the U.S. The combined population of nations constituting the North Atlantic Treaty Organization is 1 billion, seven times that of Russia. Last year Russia’s military budget was under $62 billion. The U.S. military budget for next year is projected to be $753 billion, over twelve times as large as Russia’s. NATO’s joint annual military spending is over $1 trillion. The U.S. divides up the entire surface of the planet between six regional military commands and as many naval fleets, the latter including eleven nuclear-powered supercarriers. The area of responsibility for Russia’s military commands is strictly Russia and its territorial waters. It has one, non-nuclear, aircraft carrier. Russia doesn’t belong to any military alliance. The U.S. heads up the only one in the world, one with thirty members and forty partners.

Russia has military personnel in Syria and small peacekeeping contingents in Abkhazia, Armenia, South Ossetia, Tajikistan and Transdniester. The U.S. has scores, by some counts hundreds, of military bases and installations on every inhabited continent. Yet Washington and NATO, the global military bloc it created and controls, assert that Russia is the main threat to world peace and have convinced much of the world of that contention.

Statements emanating from NATO Headquarters in Belgium in recent weeks have provided a uniform narrative portraying Russia as expanding its alleged military aggression further and further afield from former Soviet space. Until recently charges of said Russian aggression were limited to its role in South Ossetia and Georgia in 2008 and in Ukraine since 2014. Now the indictment is substantially broader.

In the middle of last month the military chiefs of Georgia and Ukraine, significantly enough, were invited to attend a meeting of NATO’s Military Committee in a chiefs of defense format in Brussels. (In 2012 NATO held a chiefs of defense staff meeting with the military leaders of 67 nations.) The two Black Sea nations were both promised eventual NATO membership at the NATO summit in Romania in 2008, were both granted successive NATO Annual National Programmes starting later that year and became NATO Enhanced Opportunities Partners last year.

The U.S., NATO and the European Union accuse Russia of “occupying” Abkhazia and South Ossetia, formerly parts of the Georgian Soviet Socialist Republic but never that of contemporary Georgia, and Crimea and by extension the Donetsk and Lugansk republics in the Donbass in eastern Ukraine. American and NATO officially have lately referred to those entities as occupied territories. As occupied territories they presumably must be returned to their rightful owners. As a stark historical parallel, in 1939 the government of Germany considered the Danzig Corridor and Alsace-Lorraine to be occupied German territories. A year later the Wehrmacht was in Warsaw and Paris.

[E]very day brings us signs of a new ‘cold’ war. At the same time, we are talking about potential conflicts that may arise not only in Europe but also in the Arctic, the Middle East, North and Central Africa, the Mediterranean, etc. – wherever Russia demonstrates aggressive ambitions and military power, provokes instability and creates areas of tension.

The chairman of NATO’s Military Committee, Air Chief Marshal Sir Stuart Peach (who visited Georgia and Ukraine in April), said on the occasion:

This afternoon, the chiefs of staff of the Allies met with their Ukrainian and Georgian counterparts. Russia continues to show a steady trend of destabilizing behavior, including violations of the sovereignty and territorial integrity of Ukraine and Georgia.

On May 31 NATO Secretary General Jens Stoltenberg answered a reporter’s question regarding Russia during a press conference at the military bloc’s headquarters in these words:

First on the Belarussian officials. We are constantly assessing security measures here at NATO and we have decided to restrict the access of Belarussian personnel to the NATO headquarters based on our assessment of security measures at the headquarters. Then on Russia, what we see is a pattern of Russian behavior where Russia over the last years have [sic] invested heavily in new modern military capabilities, from conventional to nuclear weapon systems. But not only that, but Russia has been willing to use military force against neighbours, in Georgia and Ukraine, increasing and continuing to destabilise Donbass in Eastern Ukraine and illegally annexing Crimea.

And then we’ve seen more Russian military presence in the High North, in the Barents Sea, and in the Baltic Sea, Kaliningrad, the Black Sea, and also down to the Mediterranean and Middle East. [Emphasis added] And this is one of the main reasons why NATO over the last years has increased the readiness of our forces and also why we have deployed battlegroups to the eastern part of the Alliance. Germany is leading one of them in Lithuania. NATO is a defensive Alliance, and NATO is there to protect and defend all Allies. And we are there to prevent conflict and war. But the best way of doing that is to send a clear message to any potential adversary that if one Ally is attacked, the whole Alliance will be there….

The references by Khomchak and Stoltenberg employing a suspiciously similar list of geographical locations, to the Black Sea, the Mediterranean Sea, the Middle East and Africa transparently indicate that evicting the Russian Black Sea Fleet from Sevastopol in Crimea would solve the problem. Another “occupied territory” to be reclaimed.