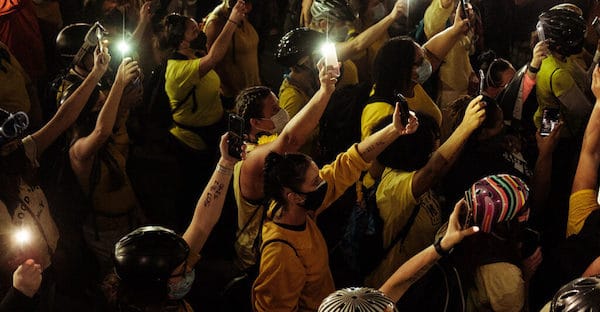 NYTUNREST Thousands of protestors raise their cellphones and sing in front of the Multnomah County Justice Center on July 20, 2020 in Portland, Oregon. NYTCREDIT: Mason Trinca for The New York Times

To mark the one-year anniversary of George Floyd’s murder at the hands of police officer Derek Chauvin, the New York Times put together a special opinion section reflecting on what has changed and where the country is now on race and police violence. One piece (5/22/21) described and analyzed the rise and fall of support for the Black Lives Matter movement:

Did George Floyd’s death catalyze support for Black Lives Matter? If so, for how long and for whom? 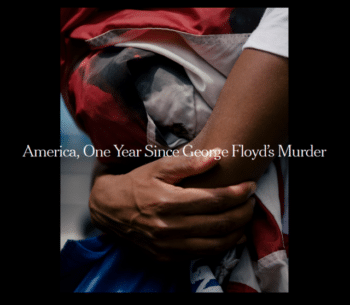 The New York Times‘ op-ed package on the anniversary of George Floyd’s killing included an examination (5/22/21) of support in polling for Black Lives Matter.

Looking at data from online polling firm Civiqs, the authors concluded that “Republicans and white people have actually become less supportive of Black Lives Matter than they were before the death of George Floyd.” Indeed, after a gradual increase in support for BLM among both whites and Republicans following the 2017 white supremacist rally in Charlottesville, and then a more marked rise that began around the release of the video of the vigilante murder of Ahmaud Arbery in May 2020, support plummeted from early June through late September.

The authors, professors Jennifer Chudy and Hakeem Jefferson, attributed the rise to the “viscerally upsetting and morally unambiguous” videos released around that time, including the video of Floyd’s murder, and the subsequent fall to “politicization of the issue by elites”:

In the days and weeks following Floyd’s death, Republican politicians quickly turned attention away from the actions of a murderous police officer to those individuals protesting the injustice. As just one salient example, three days after Floyd’s death, as protesters took to the streets in Minneapolis, Mr. Trump declared, in memorable rhyme, “When the looting starts, the shooting starts.”

That’s true as far as it goes—but it leaves out a critical piece of the story. While Trump’s tweet made headlines, it didn’t name BLM; the former president actually called out BLM very infrequently. Given his average of more than 30 tweets per day in 2020, his 25 “BLM” or “Black Lives Matter” mentions across the entire year were a drop in the bucket. In contrast, he tweeted or retweeted about Antifa 55 times.

The right’s most influential media outlet, however, was more than happy to make those links explicit for its predominantly white, Republican audience.

For the first five months of the year—when Republican opposition to BLM continued its slow creep downward from a high of 83% in 2017 toward 60%, Fox News mentioned Black Lives Matter in 14 shows. For the next five months, the network mentioned the movement in 543 shows. 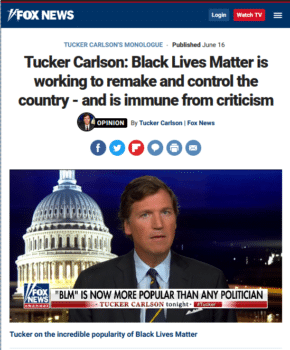 Fox News (6/16/20) presented the popularity of Black Lives Matter as a problem that needed solving.

Primetime ratings leader Tucker Carlson led the charge, with such racist and false depictions of BLM protesters that at least nine advertisers withdrew their ads from his show (Media Matters, 6/10/20). To give just a few examples (see Media Matters for a lengthier list), Carlson agreed with a guest that BLM “has been a violent movement from its inception” (6/5/20), claimed that one of its stated positions was “the destruction of the nuclear family—your family” (6/15/20), suggested that BLM “is a totalitarian political movement and someone needs to save the country from it” (6/22/20), and argued (6/15/20):

Black Lives Matter believes in force. They flood the streets with angry young people who break things, and they hurt anyone who gets in the way. When they want something, they take it. Make them mad and they will set your business on fire.

But of course, the attacks on BLM were not limited to Carlson; they went wall-to-wall at Fox. On just one episode (6/8/20), host Laura Ingraham brought on three different guests to attack BLM, asking one why the movement seeks “a complete subjugation of others.” (The guest, in turn, warned of BLM’s “Black supremacy” and “Marxist agenda.”) To another guest, Ingraham caricatured the BLM philosophy: “If you have to burn down the neighborhoods and tear down the Lincoln Memorial, because he wasn’t woke enough, then you’re going to have to do it.” Guest Lara Logan of Fox Nation argued:

These people don’t care about justice for anyone. What they’re actually trying to do is provoke violence, provoke more incidents where more innocent people will die. 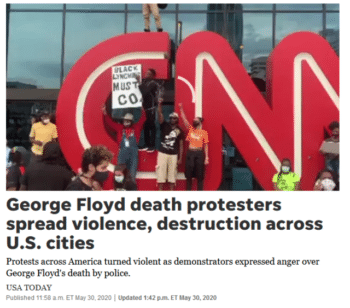 (Another piece from the Times’ op-ed package—5/21/21–the paper devoted some 4,500 words to a transcript of an un-factchecked focus group with “14 Trump Voters on the Legacy of George Floyd”; in it, the influence of right-wing media distortions was apparent. When asked what comes to mind when they hear “Black Lives Matter,” the answers were invariably negative, including “Marxist hate group,” “misguided,” “corrupt” and “a bunch of losers.” When told that the BLM protests last summer were “overwhelmingly peaceful,” a participant retorted: “I just want to say, is this a joke? I mean, are you serious? Really? They were peaceful protests? You’ve got to be kidding.” The Times might have saved a great deal of ink and just posted a link to an episode of Tucker Carlson’s show.)

While centrist media didn’t vilify BLM in the same way, they did disproportionately emphasize disruptive protesters, particularly early on (FAIR.org, 7/1/20). Protests, in fact, were overwhelmingly peaceful—one major study found that 96% involved no property damage or police injuries—with episodes of violence typically initiated by police rather than protesters. Yet outlets ran with headlines like “George Floyd Death Protesters Spread Violence, Destruction Across U.S. Cities” (on a USA Today video, 5/30/20) or Reuters‘ “Racially Charged Violence Rages for Third Night in Minneapolis” (5/29/20).

Such coverage didn’t seem to erode Democrats’ support for BLM, which rose sharply after Floyd’s murder and has since stayed high. But it did nothing to correct the right-wing purveyors of outright bigotry and falsehood, whose role in turning white Republicans strongly against the Black Lives Matter movement should not be overlooked.