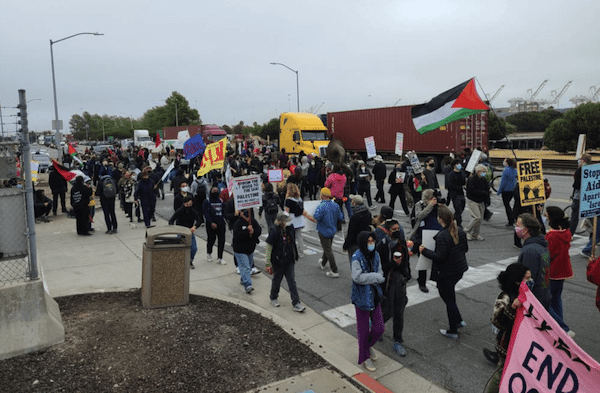 Hundreds of protesters have gathered at the Port of Oakland to block an Israeli cargo ship from offloading. The “Block the Boat” effort has been led by the Arab Resource and Organizing Center (AROC). The group says that they’ve successfully prevented the Haifa-based shipping company ZIM from docking in Oakland.

Massive disruption at the Port of Oakland to block the apartheid-profiteering Israeli ZIM ship from unloading cargo. No justice, no commerce. #BlockTheBoat #BDS pic.twitter.com/wuw7nV42GH

Last month members of the South African Transport and Allied Workers Union refused to offload a ZIM ship in Durban. The workers were heeding a call from the Palestine General Federation of Trade Unions for solidarity. Dockworkers in Livorno, Italy also refused to load a shipment of arms going to Israel.

We out here to #BlocktheBoat! Over 200 at the port of Oakland right now, numbers growing by the minute. pic.twitter.com/SVBsXd1NAa

In 2014 AROC launched the Block the Boat coalition in response to ZIM attempting to dock in Oakland and the International Longshore and Warehouse Union (ILWU) refused to offload ZIM’s cargo in solidarity. The company has not tried to dock in the city again until this week. Activists throughout the country have vowed to also block any ZIM ship that tries to offload in their cities.

We’re current picketing 6 different gate entrances with over 600 people, and workers are not crossing the pickets. The message is clear: profiteering from Israeli apartheid is not welcome in the Bay Area.

One of SIX ENTRANCES here at the Port of Oakland being picketed by the Bay Area community. Hundreds at this entrance alone in solidarity with Palestine. The ZIM ship must turn away! #BlockTheBoat #BDS #EndIsraeliApartheid pic.twitter.com/ZX80Agle06

Historic victory for #BlockTheBoat & #BDS! After 2 blockades honored by ILWU Local 10, we have successfully turned away the apartheid-profiteering ZIM shipping line from the port of Oakland. The International Week of Action continues to ensure that ZIM is turned away everywhere! https://t.co/EnHs2gGVUh