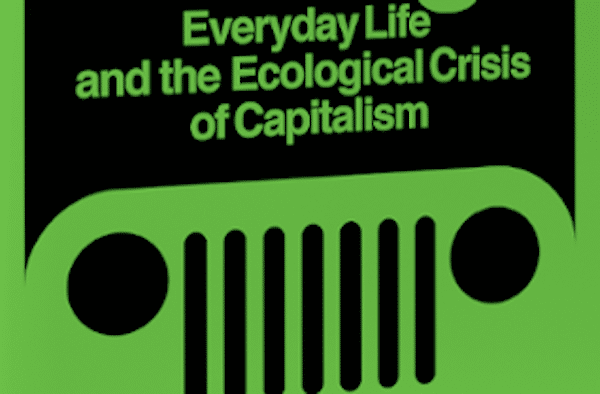 Everyday Life and the Ecological Crisis of Capitalism

When it was first published in German in 2017, Ulrich Brand’s and Markus Wissen’s book The Imperial Mode of Living attracted widespread attention and was discussed in mainstream media, while, at the same time, fueling an intense debate within the German academic left. The multiple reactions were not by chance; they were the result of the provocative and innovative nature of the book. The authors claim that the dominant mode of living in the Global North, to a large extent, depends on the exploitation of people and natural resources in the Global South. Or put differently, the fact that we (as inhabitants of the Global North) can enjoy a relatively comfortable standard of living is based on a long history of the depletion of nature and the preservation of poor working conditions in other parts of the world.

This exploitative relationship exists independent of our individual consciousness and political stand, including, in some cases, our desire to buy eco- and human-rights-friendly products. It is part of a capitalist system of global power relations, mediated through a set of everyday practices that link production to consumption and thus constrains individual behavior in the capitalist centers. This does not mean that everyone in the Global North benefits equally. The authors note that it is the wealthier upper classes that consume more and by doing so put a greater strain on ecological and human resources in the Global South. 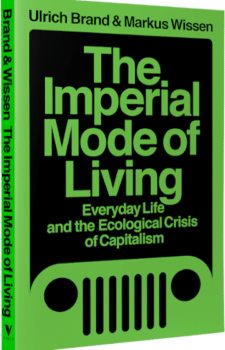 One example they give is the case of automobility (discussed in a separate chapter). The use of cars as the main means of transport in the Global North depends on the exploitation of oil and other raw materials, many of which are located in the Global South. In addition, automobility is heavily subsidized by the state through the creation and maintenance of a network of roads and related infrastructures. The absence of public transport outside the urban centers leaves people no choice but to use a car when they need to get from one point to another.

However, wealthier individuals do not choose any car. Even in Germany, they increasingly buy sports utility vehicles (SUV). SUVs tend to be larger and heavier than regular passenger cars and, consequently, need more gasoline and produce more carbon dioxide (and are more dangerous to other road users). They are mainly responsible for carbon dioxide emissions from passenger cars having continued to increase, in spite of progress in fuel-efficiency and the spread of electric vehicles. In short, SUVs are a prime example of what the authors call imperial automobility.

The book suggests a number of important modifications to the critique of global capitalism and the debates about how to solve the ecological crisis: First, it links production to consumption. Too much of current debate focuses on global production networks and forms of exploitation in developing countries without mentioning related forms of consumption in the capitalist core. Second, it highlights the ecological costs of capitalist production and consumption, the brunt of which are borne by the Global South. It thereby overrides the split between economic, social, and ecological research agendas.

Third, it shows that the problem is not individual consumer behavior, but rather, global capitalism. As such, the global ecological crisis cannot be solved by introducing incentives for less ecologically damaging consumer choices, but instead, by the revision or, perhaps, abolition of the capitalist system. In short, Green Capitalism is not an option that will save the planet as we know it.

Class Divisions in the Global North

My main critique of the book centers on the authors (implicit) assumption that living conditions in the Global North are generally favorable. Even in advanced capitalist countries, millions struggle to survive. They have no job, no home, and not enough food. In the USA, some 30 million people lack healthcare coverage (and other forms of care), and many more cannot afford college. Even those who have a decent income spend a large part of it on rent or mortgage payments (following the shift in the functioning of housing from a place to live, instead, to an investment and object of speculation). Much of their consumption is based on industrial food and cheap low-quality consumer goods imported from China, including throw-away garments (just take a look at Walmart). It is true that many drive SUVs (often bought on credit), but, in turn, they spend hours commuting between their workplaces and their homes.

Furthermore, in the Bay Area (around San Francisco), wealthier individuals drive Teslas and other high-priced electric vehicles. These people also buy organic food and enjoy vastly superior goods, and even more importantly, services out of reach for ordinary working-class families. In sum, the imperial mode of living subsumes vastly different living conditions (based on record-high income inequality). While some enjoy a relatively luxurious and superficially ecologically less destructive lifestyle, the mode of living of the vast majority is far from satisfactory. These people, including recent immigrants from the Global South, will have little understanding of the proposition that they are living at the cost of others, including those in other parts of the world. This does not mean that Brand’s and Wissen’s critique is unfounded, but perhaps, it could be a bit more nuanced.

The book also discusses alternatives to the imperial mode of living. The answer is what the authors call a solidarity mode of living. The exploitation and externalization inherent in the current system should be replaced by mutual support and respect and the provision of a ‘good life’ for all on the planet, a life that is ecologically and socially just. While this concept is mainly geared toward overcoming the exploitation of the Global South and solving the related ecological crisis, it can also be taken as starting point to transform societies in the Global North.

As such, a solidarity mode of living could start with a massive redistribution of wealth and the expansion and improvement of public goods and services, including efficient public transport and sustainable public housing, in the advanced capitalist countries. Then the solidarity mode of living would be attractive not only to people in the Global South but also to the majority in the Global North whose lives are far from luxurious.

Christoph Hermann teaches at the University of California, Berkeley, and is the author of Capitalism and the Political Economy of Work Time.