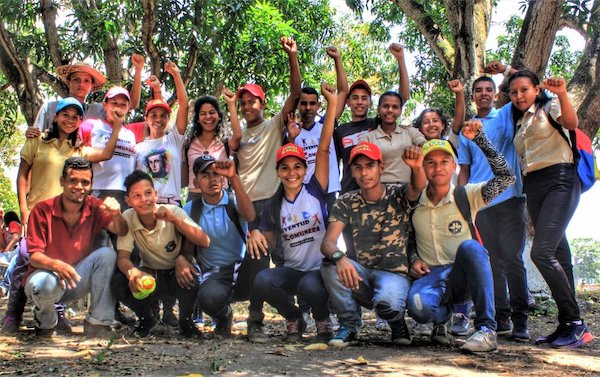 Venezuela’s National Assembly (AN) has approved two bills with the aim of further empowering the communal councils and communes that lie at the heart of the country’s project of communal power.

The first provides a legislative framework for communal cities. While some already exist, uniting communes within a specific city or town, there is currently no law regulating their functions or powers.

The second seeks to establish a Communal Parliament, whose representatives would be elected from the bodies of communal power and remain accountable to them. Its role would be to “deliberate” on matters relating to communal structures, propose relevant legislation to the AN, and supervise the work of the Ministry of Communes.

Both bills were passed on April 13, but need to go back to the AN for a final vote.

AN president Jorge Rodríguez said of the bills: “Today, this parliament has given the people of Venezuela a fundamental instrument to deepen participatory and protagonistic democracy…

I ask deputies that, as part of a necessary consultation, this law be disseminated in every corner of the country.

However, commune activists have raised concerns about the intention of the bills and, more broadly, the direction the Venezuelan government is going in when it comes to communal power.

Communal councils are the smallest building block of communal power. They are grassroots bodies that bring together existing local organisations and residents.

In an interview with Cira Pascual Marquina, José Luis Sifontes from the El Maizal Commune, which extends across the border of Lara and Portuguesa states, explained: “When [former president Hugo] Chávez arrived, territorial work committees began to organise.

Urban land committees, technical water committees and healthcare committees were all born in the early days of the Bolivarian Revolution.

Those were the first steps towards a broad popular organisation in the territory aimed at solving the problems of the people in the communities.

Communal councils — which brought together the work committees — emerged in that context\… What Chávez did was provide a legal framework to the various expressions of popular organisation.

Under the 2006 Communal Council Law, these bodies can encompass 200–400 families in urban areas and 20–50 families in rural areas. Decisions on prioritising problems and how to tackle them are made in citizen assemblies, open to the entire community, with funds for projects provided by the government.

Through this process, Sifontes said, the need to link up communal councils and other social organisations in a defined community to form communes emerged.

The basic idea of the commune, which became law in 2009, is to allow these communities to take on bigger projects. Their larger scale also enables them to potentially become self-sustaining, through initiatives such as cooperatives, worker-community run enterprises and communal markets that reinvest funds back into the commune.

The new bills have drawn criticism from right-wing opposition sectors, including within the AN, who claim the “unconstitutional parallel structures” will spell the end for elected offices such as mayor and governor, and even the AN itself.

On the other hand, grassroots activist and AN substitute deputy Oliver Rivas told Venezuela Analysis he believes the new legislative initiatives could potentially open — or re-open — public discussion on how the state should be structured.

Welcoming the discussion, Sifontes warned however that, “when it comes to new laws, we should be wary”.

One worry is that the new laws could “impose external administrative procedures and institutional requirements” that represent a “break with participative democracy”.

It would be a mistake to put up barriers to the promotion of communal cities, to put ‘legality’ as an obstacle in the advancement of communal organisation.

He also raised concern that the initiative for building communal cities could be taken away from communes and put in the hands of either the Ministry of Communes or local mayors and governors.

Amarelis Guzmán, from the Máximo Vizcaya Socialist Commune in Yaracuay state, went further, telling Green Left she views the laws as a deliberate attempt to impose control over the communes.

Guzmán, who is involved with the National Network of Commune Activists, said that following Chávez’s death, the government of president Nicolas Maduro “did not pay much attention to the communes”.

“Now they want to take them over. They have been building and creating their own communes, and promoting their own [commune] spokespeople, while pushing aside those who have been a key part of the commune movement since 2008.”

Moreover, “there is a strong belief that the push for communal cities is an attempt to subsume the communes under the control of local political officials.

“They want to demonstrate that they have power in the territory they control” she said.

Guzmán also sees the proposed communal parliament as a move by the governing United Socialist Party of Venezuela (PSUV) to “control everything”.

have to be vigilant about the Law of the Communal Parliament … because some want to fit the commune into the bourgeois state’s structures.

We should be wary of tendencies that want to fit communal councils and communes in that structure… Doing so would be a serious mistake.

In our view, the Law of the Communal Parliament must progressively open spaces for the integrated system of communes while becoming a vehicle to the new communal state…

It is troubling how some sectors within the Bolivarian process ignore Chávez’s proposal for the communal state. We have to combat these tendencies because the new state’s birth is imperative.

Chávez viewed the communes as fundamental to the construction of a new communal state based on self-management and participatory democracy.

In 2009, amid the debate on communes, he explained that the Bolivarian Revolution had “inherited a capitalist state that serves the interests of the bourgeoisie” and remained “penetrated by interests contrary to the revolution”.

To overcome the bureaucracy and corruption of the old state, Chávez said “the construction of a communal state” was necessary.

However, Chávez’s concerns regarding the future of the communes — and the huge obstacles that remained in their way — was clearly evident.

In his final public speech on October 20, 2012, shortly before his death, Chávez blasted ministers for not prioritising the communes, and in some cases actively seeking to undermine them.

The future of the Revolution, Chávez said, could be summed up as “commune or nothing!”.

Since then, the country’s communes have had to weather the effects of prolonged economic disaster, international sanctions, worsening living conditions, mass migration and reduced state funding.

In the context of the current crisis, the people are not prioritising popular organisation, instead they are prioritising meeting their day-to-day needs.

In this sense, there’s been a certain pause in building the communal state, which continues to be the vision, the idea for where we want to go.

Despite all this, communes remain active across Venezuela, even if in smaller numbers, and many of them have been greatly empowered by the experience and knowledge that they have overcome these adversities by exercising communal power.

Back in 2018, Pacha said she was hopeful that “we will be able to get to the communal state”.

But this will only be possible as long as the current state continues to support us, because if we depended only on popular organisation, unfortunately, this will not be enough.

We need the state to involve itself in building communal power and at the same time accept its replacement by this communal power, because that is the idea — to replace the existing state power.

Three years later, however, the trend appears to be going in the opposite direction.

As we speak, the main contradiction [of the commune movement] is with the party [PSUV] and the state’s institutions. The question is: who is going to promote popular organisation and shape the new communal state?

According to Amarelis, while under Chávez “everything was the result of popular initiative; participation was voluntary and there was no coercion, today the communes face a political monster — the PSUV — that wants to control everything.”

there is a latent internal debate regarding the need to overcome the old bourgeois state. When it comes to doing so, there is resistance and even entrenchment.

It concerns us that Chávez’s project [of creating the communal state] is being abandoned.