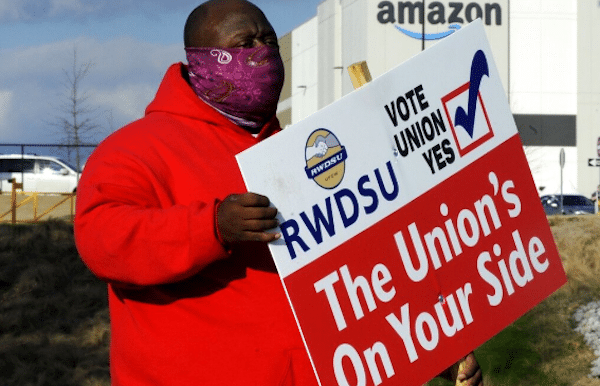 When Amazon busted a union drive at its Bessemer, Ala., warehouse earlier this year, it ran a sophisticated campaign which involved sending text messages and mailers to employees warning them of the downfalls of a union, offering bonuses to employees who quit before the union election, and even allegedly accessing the dropbox that employees used to mail their ballots.

But the size and scope of Amazon’s efforts–and who was coordinating them–wasn’t fully visible to the public or to employees partaking in the election, because the Trump administration scrapped a rule that would have required disclosure of certain union-busting expenditures by corporations. The so-called “persuader” rule was designed to spotlight an industry that rakes in nearly $340 million a year advising corporations on how to prevent their employees from unionizing.

Biden promised during his campaign to revive the persuader rule, but he so far has refused to follow through on the pledge, which could expose the activities of large corporate law firms who offer “union avoidance” services and whose employees funneled big money to Biden’s campaign and the Democratic Party as a whole.

Business interests that stand to lose from the measure are actively fighting against it. That includes not just big corporations eager to quash labor efforts, but also the umbrella organization for the legal industry itself: The American Bar Association (ABA). The group has opposed the persuader rule for years, arguing it would violate the confidentiality granted to attorney-client communications.

But legal ethics experts dispute this point, and believe the ABA really just wants to protect a lucrative business for the legal industry as a whole. Blocking the rule would let union-busting law firms continue raking in fees for anti-union work while shielding their identities from scrutiny and public pressure.

“I would suspect that the ABA’s argument is, in many ways designed to serve the interests of a really powerful constituency within what’s essentially a guild for protecting the interests of lawyers within the American political system,” Scott Cummings, a professor of legal ethics at The UCLA School of Law, told The Daily Poster.

“Labor lawyers’ interests, at least on the management side, I would imagine are a pretty powerful constituency within the bar,” he added.

These are mostly large law firm lawyers, who represent big companies in labor management relations, and they have a large voice in bar governance. So I imagine that their interest in not having to disclose their involvement under these disclosure rules is pretty powerful.

A Threat To Businesses And Corporate Lawyers

The persuader rule was initially proposed by the Obama administration in 2011 by Labor Secretary Hilda Solis under the Labor-Management Reporting and Disclosure Act of 1959 (LMRDA), a law governing the disclosure of expenditures by unions and employers on labor-management activities.

Previously, the Labor Department had interpreted this law only to require disclosures when companies paid union-busting firms that were directly speaking with employees. The so-called “advice exemption” has allowed employers to avoid disclosing payments to firms that are advising them on how to handle the union drive, without interacting directly with employees.

The persuader rule would expand the disclosure requirement to apply to circumstances where lawyers or consultants are advising the employer on how to engage with employees. According to the Obama Labor Department, it would additionally cover “planning or conducting employee meetings; training supervisors or employer representatives to conduct meetings; coordinating or directing the activities of supervisors or employer representatives; establishing or facilitating employee committees; drafting, revising or providing speeches; developing employer personnel policies designed to persuade employees; and identifying employees for disciplinary action, reward, or other targeting.”

Anti-union corporate lobbying groups like the U.S. Chamber of Commerce and the National Federation of Independent Business both submitted public comments opposing the proposed rule.

The Chamber wrote in a comment that the persuader rule was a violation of the First Amendment, arguing that “organized labor and its allies have fabricated a narrative that portrays the long decline in private sector union density in the United States as the result of flawed National Labor Relations Board (NLRB or Board) processes and employer campaigns.”

Other business groups submitted comments opposing the rule, including the National Small Business Association, the National Association of Manufacturers, and local chambers of commerce.

Representatives of the legal industry also fought the rule.

The Association of Corporate Counsel, a professional association for in-house lawyers in corporate legal departments, submitted a comment opposing the rule, arguing it would dissuade clients from hiring lawyers.

“The simplest test for determining whether the attorney-client relationship and its associated privileges have been undermined is to ask: Will a client with legitimate interests be less likely to retain counsel due to the fear that others will learn of confidential information? Here, the answer is very straightforward: yes,” read the comment, which was drafted with the advice of an attorney from the major employment law firm Jackson Lewis. This deterrent, the Association argued, would compromise the right of clients to counsel.

The ABA made a similar argument:

By requiring lawyers to file detailed reports with the Department stating the identity of their employer clients, the nature of the representation and the types of legal tasks performed, and the receipt and disbursement of legal fees whenever the lawyers provide advice or other legal services relating to the clients’ persuader activities, the Proposed Rule could chill and seriously undermine the confidential client-lawyer relationship.

In other words, if companies had to disclose the fact that they are retaining union-busting lawyers or consultants, they might choose not to hire them.

“The persuader rule requires disclosure of the fact that the lawyer is providing legal advice on a union organizing drive issue, and I’m not sure that actually counts as confidential information, because this is the fact of the representation itself as opposed to anything about the content, and that’s usually not confidential,” said Cummings, the UCLA legal ethics professor.

This isn’t the first time the ABA has invoked confidentiality to try to protect its members from disclosing controversial clients. The ABA spent years lobbying against a law to crack down on the use of shell companies in order to combat money laundering and sex trafficking, using the same arguments about confidentiality and the chilling effect of disclosure.

The ABA opposed that law, critics said, because its members make a lot of money setting up shell companies, and they would be implicated in the disclosures required by the law. Matthew Stephenson, a professor of anti-corruption law at Harvard, called the ABA’s reasoning “self-serving and intellectually bankrupt.”

As Stephenson told Quartz about the ABA’s opposition,

There’s a faction of lawyers who are heavily represented not necessarily in the ABA as a whole but on relevant ABA committees on this issue, that make a lot of money from registering companies anonymously. They’re worried about losing business because in some cases the anonymity is precisely what the clients care about, such that if they can’t register companies anonymously they won’t do it at all or will go to another jurisdiction and lawyers will lose out on their business.

In 2016, the Labor department finally enacted the persuader rule. It was immediately challenged by business groups and management-side labor and employment law firms in three different federal courts. In two courts, judges declined to enjoin the rule from taking effect.

But in the U.S. District Court in Lubbock, Texas, Judge Sam Cummings–appointed by President Ronald Raegan in 1987–issued a nationwide preliminary injunction, halting the implementation of the rule.

Included in Cummings’s ruling was a lengthy discussion of the ABA’s opposition to the persuader rule. He also agreed with the argument that the rule would have a “chilling effect” on representation:

Indeed, Plaintiffs have shown that there is a substantial likelihood that that many attorneys will no longer be available and willing to offer legal advice to employers relating to union campaigns as a result of DOL’s New Rule.

That fall, Donald Trump was elected president and soon after, his Labor Department announced it was considering a repeal of the rule.

In response, nearly three dozen law professors from around the country who specialize in legal ethics and labor law sent a letter to lawmakers in support of  the rule. They argued that the persuader rule “can coexist comfortably within the lawyer’s obligations under the American Bar Association’s Model Rules of Professional Conduct,” and noted that multiple circuit courts of appeal had also found that the persuader rule did not breach the confidentiality granted to attorney-client relationships.

Moreover, such disclosures have legal precedent that have gone unchallenged, the professors wrote.

“There are many other laws that require certain disclosures by attorneys when they engage in certain activities on behalf of a client, including the Lobbying Disclosure Act (LDA) of 1995,” noted the letter.

Lobbying disclosure reports require much of the same information as on the forms that are at issue here, including the names of clients and payments. Both lawyers and non-lawyers alike are subject to the reporting requirements of the LDA, which has never been successfully challenged in over 20 years in effect.

The Trump administration ultimately repealed the rule, precluding an appeal of the Texas federal court’s injunction.

The ABA took credit for the repeal in its member magazine. “The [Labor] department said it found the ABA comments persuasive and emphasized that the duty to safeguard client confidences has long formed the bedrock of the attorney-client relationship,” according to a November 2018 article in the ABA journal.

Now, under a new Democratic administration, the ABA and other corporate interests are renewing their efforts to ensure the rule never comes into effect.

Biden’s 2020 platform included support for the persuader rule, but he has so far declined to use his executive authority to enact it.

A version of the persuader rule is also included in part of the Protecting the Right to Organize (PRO) Act, a major labor reform bill being considered in Congress. The legislation includes other provisions that could impact the role of union-busting these firms in union elections, such as a ban on requiring workers to attend “captive audience” anti-union meetings, and constraints on the employers’ ability to delay the union certification process.

But the PRO Act still does not have the support of all 50 Democratic senators–there are three holdouts: Sens. Mark Kelly and Kyrsten Sinema of Arizona and Mark Warner of Virginia. Even if every Democratic senator cosponsors the bill, it likely won’t become law unless the Senate eliminates or reforms the filibuster.

In the last few years, groups like the Retail Industry Leaders Association and the U.S. Chamber of Commerce have continued to lobby on the persuader rule.

Ballard Spahr, a firm that advises on “union avoidance,” hosted a virtual “Biden’s Home States” event for his inauguration celebration, along with the Delaware and Pennsylvania Democratic parties. Ballard Spahr employees donated over $200,000 to Biden’s 2020 campaign.

At the same time, the ABA has continued its crusade against the rule.

This April, the ABA sent a letter to Senate leadership, demanding they remove the persuader rule from the PRO Act.

“By expressing our opposition to the persuader rule provision in the PRO Act, the ABA is not taking sides in a union-versus-management dispute,” the ABA wrote.

Instead, the ABA is defending the confidential attorney-client relationship and right to counsel by urging Congress not to impose an unjustified and intrusive burden on clients and the attorneys and law firms that represent them.