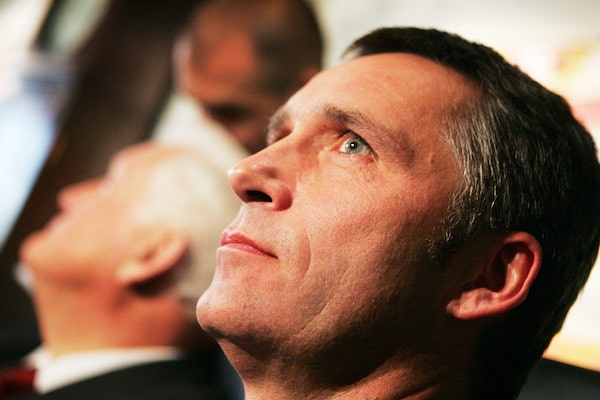 Just hours ahead of the NATO summit in Brussels on June 14, the military bloc’s secretary general, Norway’s Jens Stoltenberg, told CNBC’s Hadley Gamble that NATO will continue to expand its military capabilities but will not “mirror” its arch-adversary Russia. And indeed without meaning in the least to do so he spoke the truth.

For while disingenuously stating the alliance he heads is pursuing a “dual track approach” to the nation whose government he routinely accuses of (his precise terminology) authoritarian push-back against the rules-based international order–an approach of defense and dialogue (note the sequence)–he immediately segued into boasting:

Nothing related to dialogue there, unless it’s the the give-and-take of threat and being threatened. The words biggest reinforcements of our collective defense since the end of the Cold War are worth being italicized.

Thirty years after the formal dissolution of the Warsaw Pact and the Soviet Union itself, the alleged raison d’être for NATO’s very existence, the bloc’s chief proudly announced the largest military reinforcements in the entire interim. He added, “And after years of cutting defense budgets, all our (members) are now investing more” and in so doing “we are not going to mirror what Russia does.”

And, again, he is perfectly correct but not in the sense he intended. Last year Russia’s military budget was slightly under $62 billion. This year it’s an estimated $42 billion; almost a third lower than the preceding year. The Pentagon budget for next year, at a prospective $753 billion, will be an increase over that of this year and the highest in absolute dollars in the history of the U.S. or any other nation.

With the military spending of other NATO nations added, the bloc will spend comfortably in excess of $1 trillion a year for defense…and very little for dialogue. That is 24 times what Russia is spending this year for defense. Indeed NATO is not reflecting Russia’s “aggressive” military “buildup.” Except in a grotesque distorting mirror.

He also asserted that, although NATO would not deploy land-based nuclear-capable missiles (it never has before and has never spoken of doing so),

we will make sure that we are responding to new Russian military buildups, including with nuclear weapons.

He also praised sanctions against Russia over the “annexation” of Crimea.

And as a rehearsal of what will be heard tomorrow at NATO headquarters, and as an indication that NATO is not even remotely interested in either dialogue or defense, he issued a statement that one would be hard-pressed to recall being even dreamed of (or being, more properly, the theme of a nightmare) during the Cold War:

Perhaps the most important thing we have done is that for the first time in NATO’s history, we have combat-ready troops in the eastern part of the Alliance. New battle groups are deployed to the Baltic countries and Poland, we have tripled the size of the NATO readiness force.

If a person could after the manner of the H.G. Wells novel travel in time and tell people in 1961 or 1971 or 1981 or 1991 that the head of NATO, which had expanded from 16 to 30 members, all 14 new ones in Eastern Europe, would make such a statement thirty years after the Soviet Union had disappeared, he or she wouldn’t be treated as a prophet or a clairvoyant but as a madman and a misanthrope. Which is what every engineer of ever-expanding, ever-more aggressive, ever-more dangerous NATO is.