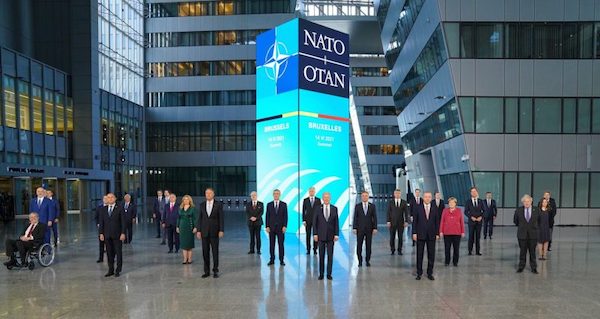 NATO heads of state at the alliance’s summit in Brussels

Joe Biden took part in several key international meetings over the last week covering a wide range of issues but with one key goal in mind: intensify the new Cold War with China and construct a global front towards this end. This is the most intensive series of diplomatic summits for the Biden administration yet, and provides key insights about how it plans to manage the affairs of U.S. empire.

The first major event took place in the UK, where Prime Minister Boris Johnson hosted the other members of the “Group of 7” club of advanced imperialist economies from June 11 to 13. Biden took credit for pushing the other leaders to attack China by name for the first time in the closely-watched communique issued at the conclusion of the summit. The communique was designed to provocatively touch on the issues that China considers to be core to its sovereignty and the integrity of its national territory.

The G7 called on China “to respect … those rights, freedoms and high degree of autonomy for Hong Kong enshrined in the Sino-British Joint Declaration and the Basic Law”. It also demanded that China “respect human rights and fundamental freedoms, especially in relation to Xinjiang”. The communique expressed support for “peace and stability across the Taiwan Strait, and encourage the peaceful resolution of cross-Strait issues. We remain seriously concerned about the situation in the East and South China Seas and strongly oppose any unilateral attempts to change the status quo and increase tensions.”

These words are dripping in hypocrisy. For 150 years Hong Kong was ruled in a completely dictatorial fashion by the British Empire with no guaranteed political rights for its residents, who were colonial subjects of the Queen of England. The city returned to Chinese sovereignty in 1997 after having been stolen in the infamous Opium Wars of the 19th century, a development the G7 leaders are effectively trying to undo by supporting the separatist protest movement. The manufacturing of the “Uighur genocide” issue by the United States and allied powers similarly seeks to slice off a major section of China’s northwestern territory and damage its reputation internationally. And far from promoting “peace and stability”, the United States and others routinely sail warships and fly military aircraft through the Taiwan Strait in deliberate provocations against China. Taiwan, formally known as the Republic of China, was seized by the defeated forces of dictator Chiang Kai-shek at the conclusion of the Chinese Revolution in 1949 with U.S. backing and is rightfully claimed by China as part of its national territory.

The Biden administration along with the other G7 leaders fueled the baseless conspiracy theory that Coronavirus was unleashed onto the world accidentally or intentionally by a virology lab in China. This is clearly intended to compensate for the imperialist countries’ woefully poor performance containing the pandemic relative to China. A similar logic was at play with the pledge by the G7 to donate one billion COVID vaccine doses to poorer nations. Especially considering how wealthy the major western powers are compared to China, the Chinese government’s extensive efforts to aid 66 other countries’ vaccination efforts has put them to shame.

A spokesperson for China’s Foreign Ministry strongly rejected the G7 communique, which it said sought to, “wantonly smear China and blatantly interfere in its internal affairs.” The ministry affirmed that,

Gone are the days when one country or a group of countries dictated the world.

The United States and European powers made economic moves to deepen their aggressive posturing towards China. On June 15, a U.S.-European Union Trade and Technology Council was established with the goal of coordinating policies to constrain China’s ability to trade with the rest of the world and pursue its economic development. The U.S. and European leaders pledged the “development and deployment of new technologies based on our shared democratic values”. It is ludicrous that the government that developed the monstrous NSA electronic surveillance state that spies on its own population along with much of the rest of the world feels the right to lecture China on democratic values in technology. To underscore their commitment to coordinating economic policy as part of a united front against China, U.S. and European officials brokered an end to their long-running dispute over subsidies for corporate giants Boeing and Airbus.

On June 14, immediately after the conclusion of the G7 summit, the leaders of the NATO military alliance gathered in Brussels. There, the leaders declared for the first time that China constituted a “systemic challenge to the rules-based international order”. The “rules-based international order” is a euphemism frequently used to refer to the existing world order dominated by the U.S.-led bloc of imperialist powers.

This represents a historic shift in the mission of NATO. Founded in 1949, the goal of NATO was to prepare for a new world war with the Soviet Union, and ensure that all the major capitalist powers would be united in their global confrontation with the socialist countries of Eastern Europe. Since the fall of the Soviet Union, NATO has served in large part as a mechanism to threaten Russia—now capitalist but still outside of the control of the traditional imperialist powers.

The elevation of China to the status of a “threat” of the same magnitude as Russia is a serious escalation. It also further disproves NATO’s assertion that it is a “collective defense” organization for the North Atlantic, considering that it has now taken up stoking war in East Asia as a core task.

Biden capped his week of diplomacy with a highly-anticipated meeting with Russian president Vladimir Putin. Biden has a long history of hostility towards Russia. He was effectively put in charge of Ukraine by the Obama administration following the 2014 coup that installed an anti-Russian government, is a proponent of the debunked conspiracy theory that Russia colluded with the Trump campaign in the 2016 election, and shortly after taking office as president called Putin a “killer”—which led to the withdrawal of the Russian ambassador to the United States and subsequently the withdrawal of the U.S. ambassador to Russia.

Anti-Russia hardliners in the U.S. political elite were disappointed that Biden expressed something less than absolute, unmitigated hostility at the Putin summit. The tone of the meeting was in marked contrast to for instance the Alaska summit with top Chinese officials in March, where the U.S. side was senselessly belligerent and saw the meeting as little more than an opportunity to raise ideologically-charged criticisms of China’s system of government. But at the same time little was done in the way of concrete action to change the status quo of simmering tension.

Biden described his policy towards Russia as “strategic stability”. This essentially means the preservation of the status quo instead of a further deterioration in relations. Towards that end, Biden and Putin agreed to hold ongoing talks between their respective countries’ officials on the issues of cybersecurity and arms control. They also put Biden’s “killer” remark behind them and agreed to send their ambassadors back to their posts.

But the core issues that have put the United States and Russia on a collision course remain unchanged: the expansion of NATO into Eastern Europe, the conflict in Ukraine, efforts at regime change in Russia-aligned Belarus, the war in Syria, and others. “Strategic stability” suggests that Biden does not intend to make any major moves to resolve these conflicts.

Biden’s preference for “strategic stability” is likely motivated in large part by his desire to focus on the new Cold War with China. Russia and China have been developing progressively closer relations in the face of deepening hostility from the United States in recent years. Keeping China and Russia divided has long been a key goal of U.S. foreign policy, and its ability to achieve this was key to its success in the original Cold War. Momentarily softening pressure on Russia to foster suspicion in China (and vice versa) is a tried and true tactic in the toolkit of U.S. imperialism.

On the road to war

While Biden and his top officials were busy escalating global tensions with statements, press conferences and communiques; bombers, fighter jets and warships in East Asia were demonstrating the real-world consequences of these reckless moves.

On Tuesday, the U.S. Navy announced it had deployed the USS Ronald Reagan aircraft carrier along with a guided-missile destroyer and a guided-missile cruiser to the South China Sea. The South China Sea is the site of numerous territorial disputes between neighboring countries including China, which the United States has long sought to inflame by sailing warships through contested waters.

Also on Tuesday, China’s air force flew 28 planes into an area around Taiwan’s airspace known as an Air Defense Identification Zone—the largest number of mainland aircraft yet to be sent into the ADIZ. This maneuver was carried out in retaliation to the G7 communique that raised the issue of Taiwan for the first time. China needed to demonstrate that it would not back down from its rightful claim to sovereignty over all of its territory.

Reports surfaced this week that the Pentagon was mulling the creation of a permanent naval task force to patrol the waters surrounding China. This task force would be led by the United States but also involve forces from U.S. allies. While it has yet to be confirmed, the task force is conceptualized along the lines of the Standing Naval Forces Atlantic that operated during the original Cold War. Should this come to pass, it would represent a major ratcheting up of military pressure on China.

The Biden administration is pursuing a foreign policy completely at odds with the interests of workers in the United States. If a war between the United States and China were to ever break out, the consequences for every person on the planet would be catastrophic. In the meantime, trillions of dollars that could otherwise be used to solve social problems will instead be wasted on instruments of destruction. And for what? The continued domination of U.S. banks and corporations over the whole world is not a cause worth dying for.