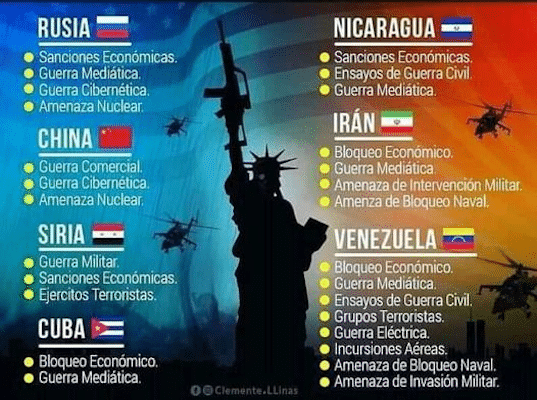 Ever since they lost badly in the 2011 elections to the Frente Sandinista, Nicaragua’s political opposition has divided into conventional political parties working in the country’s legislature and an extra-parliamentary opposition based in local NGOs. The U.S. government, in particular, gave up supporting Nicaragua’s opposition political parties financially so as to focus on consolidating an opposition bloc exploiting the figure of “civil society” but excluding the country’s main labor and rural workers’ organizations and the cooperative movement. The member organizations of this exclusive, bogus civil society were all financed either directly by the U.S. and allied governments or indirectly via foreign corporate and state-funded foundations.

After a period of accumulation of resources from 2011 onward, this extra-parliamentary opposition mounted the violent, U.S. designed coup attempt which lasted from April to July in 2018. But the main opposition political parties for the most part respected the country’s institutions and refrained from taking part either in the widespread extreme violence or in the national dialogue between the coup promoters and the government. For that reason, no leading figure from Nicaragua’s opposition political parties has been affected by the recent series of arrests of people from organizations that supported the 2018 coup attempt.

All those arrested face well-supported indictments for illegal activities that would incur criminal prosecution in the United States, any country of the European Union and practically every country in Latin America and the Caribbean. The main formal indictment against all the individuals under investigation is that of acting in violation of Nicaragua’s Law 1055, “Law for the Defense of the Rights of the People to Independence, Sovereignty, and Self-Determination for Peace”. Under the law, it is a crime to seek foreign interference in the country’s  internal affairs, request military intervention, organize acts of terrorism and destabilization, promote coercive economic, commercial and financial measures against the country and its institutions, or request and welcome sanctions against the State of Nicaragua and its citizens.

In addition, Cristiana Chamorro of the Violeta Chamorro Foundation, Juan Sebastian Chamorro of the Nicaraguan Foundation for Economic and Social Development (FUNIDES), Felix Maradiaga of the Institute for Strategic and Public Policy Studies (IEEPP) and Violeta Granera of the Centre for Communications Research (CINCO) may also face charges for money laundering and breaking the “Foreign Agents” law which requires all organizations receiving finance from overseas to register with the authorities, report the amount of money received and how it is used. The law strengthens the already existing Law 147 regulating non-profit organizations under the supervision of the Ministry of Governance (MIGOB) which obliges non profits to report annually on their sources of income and how the money was spent.

Despite numerous reports in international media to the contrary, none of the people arrested had been selected by any of Nicaragua’s political alliances or parties as possible candidates for the upcoming general election on November 7th this year. Cristiana Chamorro, Juan Sebastan Chamorro, Arturo Cruz and Felix Maradiaga had earlier stated they aspired to the candidacy of one of the political parties, most likely the Citizens for Liberty political alliance. But none of them was formally under consideration. In any case, as many observers have noted, the figure of their possible candidacy in the elections has served as a smokescreen to distract from the criminal charges against them, for which they would face prosecution in practically any country in the world.

The other main group of Nicaragua’s extra-parliamentary opposition facing indictment under Law 1055 are the leaders of the Unamos political movement, formerly the Sandinista Renewal Movement (MRS). These are former leading Sandinistas Dora Maria Tellez, Victor Hugo Tinoco and Hugo Torres and their younger colleagues Ana Margarita Vigil, Suyen Barahona, and Tamara Davila. With the cosmetic political makeover from MRS to Unamos, the MRS old guard have tried to play down their Sandinista past and links to their network of ex-combatant supporters. A relatively small but experienced and committed group of these ex-combatant MRS supporters played a key role organizing, directing and leading the violence of 2018 that resulted in over 260 deaths.

Former guerrilla hero Hugo Torres is reported by the UK Guardian noting in relation to the recent arrests of well-known opposition figures in Nicaragua “… that’s how life goes: those who once held their principles high have now betrayed them.” Torres should know. He has collaborated with U.S. government intervention in Nicaragua since at least 2005. Ever since then, until very recently, Tellez, Torres, Tinoco and other ex-sandinistas like Monica Baltodano and Henry Ruiz successfully fooled their foreign supporters by claiming they were loyal to some kind of authentic Sandinismo which they could never quite define.

Monica Baltodano posed as a super-revolutionary, fooling leftists in Europe especially, while all the time collaborating closely with Nicaragua’s right wing and accepting substantial funding for her Popol Nah NGO from the European Union and USAID. From 2007 to 2011, she served as a legislative deputy for the center-right social democrat MRS party of Tellez and Torres at the very time that party was allied with Nicaragua’s right wing. For example in the 2008 municipal elections they openly campaigned for oligarch banker Eduardo Montealegre, PLC political party candidate for mayor of Managua, when the PLC was still controlled by corrupt ex-president Arnoldo Alemán. For her part Baltodano has so far not figured in the current series of indictments.

Baltodano’s ex-sandinista allies in the Unamos leadership are accused of breaking the law against collusion with foreign powers, but that may well turn out to be less serious than their possible role in planning new attacks, similar to those of 2018. Between April and July that year, 22 police officers were killed and 400 suffered gunshot wounds at the hands of well-armed opposition activists. The MRS ex-sandinistas and their accomplices, like Medardo Mairena and Francisca Ramirez of the extremely violent Anti-Canal Movement and right wing Catholic Church bishops and priests, including Silvio Baez, Rolando Alvarez and Abelardo Mata, organized and supported widespread mass extortion and violence including murder, torture, arson, rape and other serious assaults affecting many hundreds of victims and their families.

After the 2018 coup attempt failed, the authorities refrained from arresting its organizers, instead focusing on people who had directly committed criminal offenses. Subsequently, the 2019 government amnesty meant that the MRS leadership, as well as Felix Maradiaga, Cristiana and Juan Sebastian Chamorro, Violeta Granera and their accomplices escaped prosecution and sentencing for their role in the coup attempt. In fact, the extremely violent events of 2018 were a massive exercise in organized crime and terrorism, during which the various components of Nicaragua’s opposition involved in it operated according to a very clear program.

For example, the MRS leadership coordinated experienced ex-combatants among their movement’s activists to help organize the violence more effectively, for example in Masaya. Felix Maradiaga coordinated with his contacts in local and regional organized crime networks to attack public buildings and run extortion operations out of Managua’s UPOLI and UNAN universities and at dozens of roadblocks. Medardo Mairena and Francisca Ramirez activated their Anti-Canal Movement thugs to do the same along the main highways leading to Nicaragua’s southern Caribbean Coast. Renegade local politicians of traditional political parties followed suit on the highway leading to the northern Caribbean Coast, for example at Rio Blanco and Mulukuku.

Right wing Catholic Church bishops and priests guaranteed logistics ensuring that churches in dioceses across the country served as headquarters for the violent opposition gangs. The private business organization COSEP also played an important role in logistics, as did opposition aligned NGO’s like the human rights organization CENIDH, and Baltodano’s Popol Nah, among others. In addition, human rights organizations like CENIDH, the Permanent Commission for Human Rights (CPDH) and the Nicaraguan Association for Human Rights (ANPDH), all funded by foreign governments, systematically misrepresented human rights abuses, inventing abuses by the authorities and concealing innumerable abuses by violent opposition activists.

Like all those organizations, the Chamorro NGOs – Cristiana’s Violeta Chamorro Foundation, Juan Sebastian’s FUNIDES and Carlos Fernando Chamorro’s CINCO–also facilitated the coup attempt by distributing money they received from foreign governments and foundations. Felix Maradiaga, Juan Sebastian Chamorro and others traveled internationally projecting a false “freedom and democracy” narrative, appearing in influential European media like the BBC, among others. The Chamorro media outlets La Prensa and Confidencial and the plethora of online proxies they set up with USAID funding coordinated the massive online disinformation campaign to mislead national and foreign opinion.

This massive and complex operation had been planned by the U.S. authorities in coordination with their agents in Nicaragua over many years following the collapse of the traditional opposition political parties in 2011. Among other things, the current investigation is likely to determine whether or not the Chamorros, the Unamos ex-Sandinistas and their opposition allies, in addition to their illegal collusion with U.S. and allied government intervention, were planning another coup attempt in the context of this year’s elections. In any case, should those currently accused end up being prosecuted and sentenced for their crimes, few people in Nicaragua will have much sympathy for them.