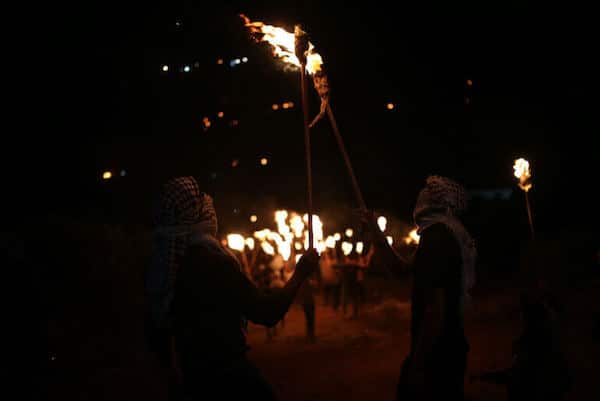 PALESTINIANS CARRY TORCHES DURING A NIGHT DEMONSTRATION AGAINST THE EXPANSION OF A JEWISH SETTLEMENT ON THE LANDS OF BEITA VILLAGE, NEAR THE OCCUPIED WEST BANK CITY OF NABLUS, ON JUNE 23, 2021. PHOTO BY SHADI JARAR’AH (C) APA IMAGES.

Update: The day after this post appeared, the New York Times covered the illegal settlement, and buried the fact that several Palestinians have died protesting it.

Last night Palestinians led a torchlit protest deep in the occupied West Bank against an “outpost” Jewish settlement that has been established on village lands in recent weeks. This is a big story because as Yumna Patel reported for us, five Palestinians have now been killed in protests against the outpost. And it is a test of Israel’s new government.

The story is getting wide coverage in Palestine but not in the United States, though these lands are the supposed basis of a “Palestinian state”–and again, five Palestinians have been killed defending their rights. 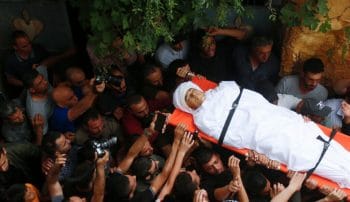 MOURNERS CARRY THE BODY OF PALESTINIAN TEENAGER AHMED ZAHI BANI SHAMSA, WHO DIED OF WOUNDS SUSTAINED AT THE HANDS OF ISRAELI FORCES DURING CLASHES, IN THE VILLAGE OF BEITA, SOUTH OF IN THE WEST BANK OF NABLUS, ON JUNE 17, 2021. PHOTO BY SHADI JARAR’AH (C) APA IMAGES.

The new settlement is called Eviatar and is built on a hilltop called Jabal Sabeeh outside the village of Beita. Three times in recent years the settlers have been evacuated by authorities; but religious Jewish zealots restarted the settlement in recent weeks in a bold and plainly illegal move, and Israeli soldiers are evidently maintaining the status quo now. And the people of Beita are determined to hold on to their lands.

Turkish media reports “a barrage of violence and deadly confrontations since May.” The settlement threatens olive groves that belong to 17 families, TRT reports. Settlers have conducted regular raids into Beita to cut down olive trees. On June 7 the Israeli army issued an order declaring the area a closed military zone in an apparent effort to freeze construction– and limit Palestinian access to land.

While Pierre Klochendler reported from the settlement for i24 News earlier this week:

This illegal outpost looks like a military camp, which it used to be. It’s not very comfortable but it’s free.

The settlers have been evacuated three times and will keep coming back, “until we take root,” one told Klochendler, who reports that the settlers moved from other settlements to the outpost with the support of the settlers’ council in the northern West Bank. The paved streets have names like Zion and Jerusalem, and 16 homes were built in little over a month.

Look at the political stakes. The Associated Press reports that the new Bennett government in Israel is likely not to do anything about the settlement, because such issues divide the fragile coalition of leftwingers and rightwingers. Though Palestinians describe it as a “cancer” and the village of Beita regards it as an existential matter to protest the colony’s creation.

Environment Minister Tamar Zandberg, a member of the dovish Meretz party, told Israeli television’s Channel 12 that she believes the peace process is important, but that the new government has agreed, ‘at least at this stage, not to deal with it.’

Yousef Munayyer points out the anti-Palestinian bigotry inherent in New York Times coverage of this area. He cites a long article in the June 22 newspaper by Isabel Kershner about different groups of Jews in the Galilee fighting for access to a pretty stretch in a stream. (A kibbutz controls the waterway and locks its gates on residents of a nearby city.) Munayyer:

Meanwhile, just 30 miles away in the village of Beita several Palestinians have been killed by the Israeli military while protesting the rapid expansion of an Israeli settlement over the last several weeks. I don’t think the @nytimes has covered this once during this time.

I cannot find any reference in the Times to the settlement or the Beita protests in the last couple weeks; and State Department briefings have also not addressed the issue.

It is apparent that it is not in the political interest of the U.S. government, or the Israeli government, for Eviatar to become a flashpoint. Both Washington and Israel want these issues to disappear quietly–though the outpost obviously is a flashpoint for Palestinian rights, or the lack thereof. 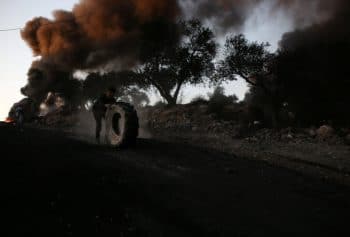 PALESTINIANS BURN TIRES DURING A NIGHT DEMONSTRATION AGAINST THE EXPANSION OF A JEWISH SETTLEMENT ON THE LANDS OF BEITA VILLAGE, NEAR THE OCCUPIED WEST BANK CITY OF NABLUS, ON JUNE 23, 2021. PHOTO BY SHADI JARAR’AH. (C) APA IMAGES.

An Israel lobbyist advises the Biden-Bennett axis to slow down settlement activity but to do so in a quiet way, so no one gets upset politically. Michael Koplow at Israel Policy Forum says the new Israeli government needs to try to “avoid any hurdles that prove insurmountable,” and Biden should accommodate by not allowing any differences to go public.

This does not mean stepping back from U.S. principles or refraining from pushing the new government on areas of importance, but it does mean doing everything possible to avoid having the U.S., its role, and its requests be hot-button political issues that give Bennett a reason to publicly push back… The U.S. should clearly communicate our concerns and requests to Bennett and Lapid, and push for progress on things like evictions and demolitions, reforming the building permitting process, and reducing IDF presence in Area A, but in a quiet manner that allows the Israeli government a measure of ambiguity and even deniability.

Again, this is not in Palestinians’ interests: They want more attention to the human rights atrocity unfolding in the West Bank. And where is the American press?