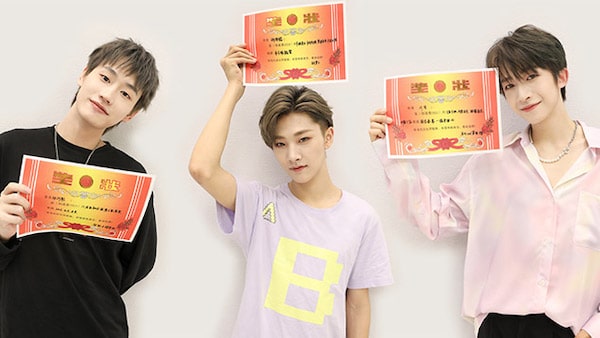 When aspiring idol Lai Yaoxiang was eliminated from the competition on “Produce Camp 2021,” he was distraught. “Why?” he wanted to know.

Did I not work hard enough?

Another player, Bo Yuan, tried to comfort him:

I’ve been in your place before, and I know exactly how you feel. You worked hard; it still just didn’t pan out.

The Chinese term they used, nu li–“to work hard” or “to do one’s best”–has come to define the ethos of China’s current generation of idols. It’s no secret that success on the country’s idol programs has less to do with talent than popularity, but nu li is nonnegotiable. Hit shows emphasize that “the harder you work, the better your chances are of succeeding,” and when fans want to defend their attachment to a given idol, “hard-working” is their go-to adjective. The winners produced by this system may not be able to act, sing, or dance, but they’re trying their best, and isn’t that enough?

Talent shows being a way for driven, talented nobodies to achieve stardom has been a truism since the first domestic idol programs were aired over a decade and a half ago. Back in 2005, when “Super Girl” inaugurated the golden age of idol shows, there were no huge, cult-like fan groups to manipulate the votes, and audiences could reasonably believe that the show’s female contestants were advancing based on their abilities and effort.

But by 2018, when the fantastically popular “Produce 101” series ushered in a new era in Chinese talent shows, the implications of nu li had grown murkier. As bands replaced the solitary idol, contestants’ musical proficiency began to matter less than their ability to entertain, court fans, and establish a public brand. Moving away from narratives of talented underdogs battling their way to the top, shows have come to lean on casts of equally “hard-working” contestants in light-hearted competition with one another.

That is, the role of an idol is no longer to “work hard and change one’s personal destiny,” but “accompany you as a hard-working star.” Aspiring idols are taught to foster close relationships with their fan bases; they are no longer titans towering over the entertainment landscape, but idealized companions or friends–and friends support each other’s dreams. The shows often play up scenes of grueling rehearsals that leave contestants on the verge of a breakdown before they power through thanks to their commitment to hard work and backing by fans.

Idol fandom has always represented an escape from the drudgery of real life, an ideal self on which to project one’s dreams. The current generation, exhausted by endless overtime for seemingly shrinking rewards, has largely lost faith in the idea that working hard can guarantee positive results. Instead, they’ve transferred that fantasy onto their idols. The more it feels out of reach to achieve a better life through hard work, the more important it feels for idols to make this dream come true. Even when a fan’s preferred idol stumbles, it only reinforces the emotional bond between the two, and idols’ foibles often make them more popular among audiences desperate to see someone, anyone, succeed.

There are exceptions, of course. One of this year’s most popular idol show contestants was Lelush, a Russian man who skyrocketed to fame for his obvious disinterest in winning the competition. He became popular in part because he embodied the exact opposite of idol shows’ ethos of hard work, and his fans adored him for his candid admissions that the life of a hard-working idol wasn’t for him.

Yet, the more Lelush struggled to get out of the show, the harder his fans worked to keep him in the competition. When Lelush obliquely criticized these “fans” for going against his wishes, some of them even turned against him, complaining that they had worked so hard to help him succeed. Ultimately, despite all the talk of “lying down” and dropping out of the rat race, even society’s discontents have a tough time imagining a different definition of success.

And if fans are turning to idol shows as an escape from the rigged system controlling their own lives, the shows themselves are increasingly dominated by behind-the-scenes politicking between connected idols, their agencies, and powerful fan groups. With a few notable exceptions, many who ranked top in the most popular idol shows come from relatively wealthy backgrounds. In some cases, their parents have worked in the entertainment industry for years, meaning they’re familiar with what they need to do to get ahead.

There are signs that not everyone is satisfied with this state of affairs. “These shows were originally a platform for ordinary people to make their dreams come true and inspire others in the process,” wrote one fan on the social media site Douban.

But people who have worked their asses off for years and years to get this opportunity now find themselves playing second fiddle to capital.

Connected, favored contestants work out what they need to do to win over fans and get noticed with the show’s producers and their agents ahead of time; those without these connections might work just as hard, but find themselves quickly eliminated. As the most-liked reply to the above-mentioned Douban post put it:

It’s not just talent shows–life is like this, too.

Whereas the first era of talent shows featured people from the lower echelons of society working to change their destiny, this era’s idols are privileged actors working to fulfill our fantasies. While the idol industry still uses the language of “hard work” and “destiny,” it feels more and more half-hearted. It’s almost as though they’re saying,

I know things don’t work this way in the real world but hey, you can still dream, right?