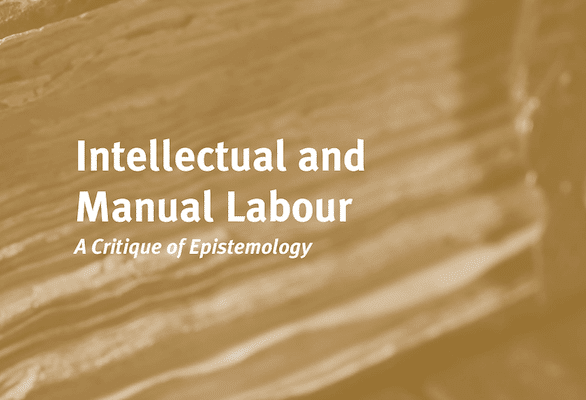 Alfred Sohn-Rethel Intellectual and Manual Labour: A Critique of Epistemology 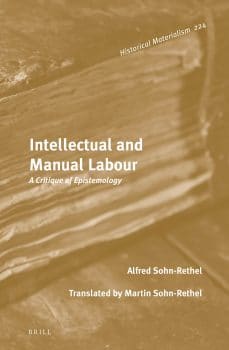 Alfred Sohn-Rethel
Intellectual and Manual Labour: A Critique of Epistemology

People who have studied Marxist philosophy will probably at some point have learned of Alfred Sohn-Rethel, either through the work of Slavoj Žižek or in surveys of the Frankfurt School. It is less likely that they will have had an opportunity to read his Intellectual and Manual Labour, for it has long been out of print and is hard to acquire. Fortunately, the Historical Materialism series has released a new edition of Intellectual and Manual Labour, which contains a useful introduction discussing the context in which the book was written and its impact on Western Marxism, as well as a collection of articles from the Italian autonomist journal Lotta Continua that show how Sohn-Rethel was received by leftist circles in Italy. Upon reading Sohn-Rethel it becomes clear that his work is important for contemporary debates on ecology, the Marxist critique of science and debates on post-revolutionary societies such as the former Soviet Union.

In the introduction by Chris O’Kane, we learn that Sohn-Rethel was part of the circle of intellectuals that included Bloch, Benjamin, Adorno and Lukács, who were all engaged in a Marxist critique of German idealism, but were outsiders within the established left. Sohn-Rethel had first-hand experience with the rise of fascism as he lived in Nazi Germany until 1937, after which he was forced to flee and resettle in England. Because his work is an indirect critique of the Soviet-inspired Marxism that was prominent in the Communist Party of Great Britain, his Intellectual and Manual Labour was rejected by Lawrence and Wishart (the CPGB aligned publishing house) and only published after Sohn-Rethel made contacts at the German publisher Suhrkamp. O’Kane points out that in the mid seventies, his work became popular with the group of Marxist intellectuals around the Conference of Socialist Economists who helped to publish his work in English. They found his theory of real abstraction helpful in their ongoing debates on commodity fetishism, the capitalist labour process and the critique of ideology.

In the first part of the book, Sohn-Rethel develops his materialist critique of epistemology, which approaches modern science in the same way that Marx criticised bourgeois political economy. His goal was to demonstrate how capitalist production relations operate within scientific research and affect the way that scientists approach natural phenomena. In a way that is similar to István Mészáros, Sohn-Rethel argues that the forms of social thought enabling scientific research are grounded within the commodity-form and develop with transformations in the mode of production. As Marx shows in Capital, the commodity-form is defined by the separation of use-value from exchange-value, and that its utility is only realisable through exchange. Sohn-Rethel points out that in the act of exchanging commodities there is a real abstraction, which reduces the commodity to a quantitative object that abstracts from all of its concrete, useful and material properties. Money is the materialisation of real abstraction, for it disregards use-value entirely in order to facilitate the exchange of commodities. Sohn-Rethel grounds idealism in the exchange of commodities through which ‘the action is social, the minds are private’ so that ‘the action and thinking of people part company in exchange and go different ways’ (24). The act of the exchange is objectively abstract while the consciousness of the commodity-owner remains concrete so that exchange itself produces a kind of practical idealism.

Sohn-Rethel notes that the class structure of commodity-exchanging societies separates intellectual from manual labour. This division enabled philosophers from Plato to Descartes to engage in mind-body dualism and idealist theorising, preferring abstract knowledge over concrete practice. Sohn-Rethel sees Kant’s theory of the transcendental subject and his categories of thought (i.e. abstract time and space, abstract motion, etc.) as an unconscious ideological expression of the process that occurs in the exchange of commodities under capitalism. He thinks that the growth of modern scientific research was made possible through the generalisation of the commodity-form, which makes nature appear as an external world entirely separate from human beings. As he notes, ‘the rise of modern science ran parallel with the rise of modern capitalism’ (61). He does not think that the results of science are wrong, but that scientific research is itself limited by the demands of capitalism, which uses science only to increase the productivity of labour.

Writers on Sohn-Rethel such as Slavoj Žižek and Alberto Toscano often only focus on his materialist critique of epistemology without showing the purpose of this critique. The second and third part of Intellectual and Manual Labourmake clear that Sohn-Rethel was concerned with how a socialist society can overcome the commodity-form and the real abstraction it creates. In a way that is very similar to Charles Bettelheim and Paul Baran, Sohn-Rethel argues that the commodity-form is incompatible with socialism and that its presence in countries like the former USSR and Yugoslavia harms the process of socialist construction. This is because the commodity-form tends to encourage the separation of intellectual from manual labour, which is incompatible with socialist construction. As Sohn-Rethel says, ‘socialism demands the disappearance of the division between mental and manual labour’ (158). Because the USSR and the Eastern Bloc countries did not overcome the commodity-form, the distinction between intellectual and manual labour strongly reasserted itself in the 1960s with the Soviet-led economic reforms. This involved using material incentives to stimulate production, a strengthening of the managerial stratum in the USSR, and decentralising socialist planning. Although they made significant progress in improving the material conditions of working people through socialist planning, Sohn-Rethel thought it would be difficult to fully transcend capitalism if the commodity-form was not overcome.

Sohn-Rethel was one of many Marxist intellectuals that was inspired by the Chinese Cultural Revolution. Along with writers like Nicos Poulantzas, Paul Sweezy and Alain Badiou, Sohn-Rethel believed that Maoist China made significant progress in improving the involvement of the working class in socialist construction, democratising planning and raising the ideological education of the masses. He believed that Maoist China was overcoming the opposition between intellectual and manual labour by integrating education more closely with the production process, thereby raising the technical level of workers and peasants. Even if recent scholarship by writers such as Julia Lovell has shown this to have been false, the perceived experience of Maoist China says a lot about Sohn-Rethel’s vision of socialism. His view of socialism is one where every worker is provided with scientific education relevant to their work in order to liberate them from the capitalist division of labour and thereby take a more active role in collectively managing production. Sohn-Rethel was thus concerned with how socialism can overcome the alienation from capitalist society and making the working class actively involved in socialist construction. The supplementary material from the Italian autonomists in the new edition shows that this was one of the primary features of Sohn-Rethel’s thinking that appealed to the Italian left. As Antonio Negri notes, Sohn Rethel is ‘a writer who introduces us to the issue of the revolutionary subject’ (191), which requires making working people active socialist subjects rather than objects of socialist planning.

In addition to reflections on how socialism can overcome the division of intellectual and manual labour, Sohn-Rethel makes some important observations of how socialism transforms our relationship to nature. He argues that under capitalism, scientists cut ‘up nature piecemenal by isolating its objects of study from the context in which they occur, ignoring nature in its importance as the habitat of society’ (147). A capitalist approach to science exploits nature in order to aid the development of industrial production and perfect the management of labour. Unfortunately, because they had not overcome the commodity-form, capitalist ideas about science and nature continued to circulate in the USSR during the sixties. Although the socialist countries did at times address environmental problems, Soviet textbooks such as Fundamentals of Marxism-Leninism by Otto Kuusinen reveal that they viewed science as a tool to allow humans to dominate nature irrespective of the environmental consequences.

Sohn-Rethel argues that a socialist society cannot continue this pattern of thinking, but must view nature as an integrated totality of which humans are a part. As he says, ‘the basic difference of socialism from capitalism […] is the relationship of society to nature’ (148). He does not offer a detailed theory on how socialists should approach nature, but one can guess what he had in mind. First, he would probably have been in favour of using environmental science to create green industries under the control of local communities. To ensure community control over nature, Sohn-Rethel would have probably argued that every worker should receive training on everything from the sewage system and plumbing to combating pollution. Second, Sohn-Rethel would have been in favour of utilising socialist planning to combat climate change and the sources of environmental destruction. With such a conscious programme, a revolutionary socialist government can take steps to radically transform the relationship of human beings to nature and their environment, which Sohn-Rethel views as the ‘the habitat of society’. Such a habitat is not one that a socialist state should dominate and exploit, but rather enable its citizens to participate in and protect.

The republication of Intellectual and Manual Labour is a gift to Marxist scholars and finally makes Sohn-Rethel’s work available to the wider public. With its additional material and contextual essay, the new edition of Intellectual and Manual Labour is likely to reinvigorate an interest in Sohn-Rethel’s work. Hopefully, his work assists those on the left who are thinking about ways to overcome the problems faced by former socialist countries and how to create a more worker-oriented, environmentally friendly eco-socialist society.