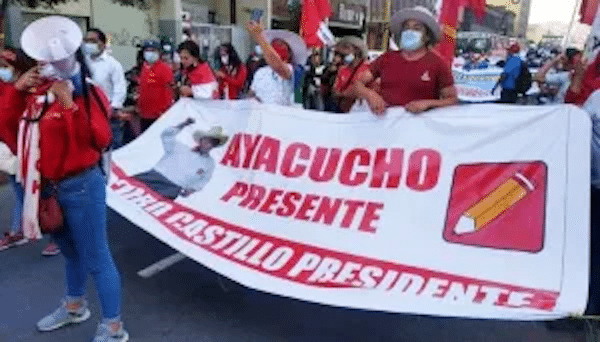 One month after holding the run-off election, Peru still has no President-elect. The winning candidate, leftist Pedro Castillo, hasn’t assumed the country’s leadership yet because the Peruvian right-wing insists that widespread election fraud has taken place, although justice authorities say otherwise.

Peru’s National Office of Electoral Processes (ONPE) concluded the official vote count on June 15. Since then, Castillo’s rival, right-wing Keiko Fujimori, has been waging a legal battle without solid grounds to reverse the result of this electoral process, which was labeled by international organizations who observed as “organized and democratic.”

But the daughter of dictator Alberto Fujimori (1990-2000) does not accept her defeat. Keiko accuses Castillo of being a “communist and socialist,” and assures that he wants to turn Peru “into another Cuba or Venezuela.” She is using arguments so often repeated against political figures who oppose the Western hegemonic model or those who, like Castillo, who come from the poorest sectors of society.

As in Peru, these adjectives were heard frequently during the elections in Ecuador, after leftist Andres Arauz won the first round of elections over his rivals Yaku Perez and Guillermo Lasso, the right-wing banker who eventually became president of the country. Currently, those words are being used again against one of Chile’s leading presidential pre-candidates, communist mayor Daniel Jadue.

Most of the time, these anti-communist adjectives are enough to gain the right-wing political movements and wealthy people’s support. But will they have any effect on Peru? Will Keiko really be able to change the outcome of the elections in her favor? Experts think not.

“Fujimori is making a fool of herself. She is following in the footsteps of former U.S. President Donald Trump in his desperate and baseless pursuit of widespread election fraud. The only difference between them is that Trump wanted to add votes to his candidacy while she has tried to make her opponent’s votes disappear,” political scientists Steven Levitsky and Alberto Vergara asserted in an article published in The New York Times.

Peruvian journalist Fernando Leyton added Keiko has already lost three times in a run-off election. “This is the reason why internally the right-wing is breaking up with her because she has failed to gain power,” he said.

The Popular Force Party’s leader also has on her back the reputation of her 82-year-old father, currently serving 25 years in prison for crimes against humanity, murder, bribery, kidnapping, and embezzlement. He is also under investigation for the forced sterilizations committed during his term against thousands of women, mainly Indigenous, a crime that Keiko has tried to justify.

Since Fujimori began demanding a full recount of votes, supporters of the elementary school teacher have been taking to the streets with signs reading,

The Fujimori regime’s victims and their families don’t forget,

According to Levitsky and Vergara, Peru’s electoral authorities have found no evidence of fraud. International observers and election experts also concluded that the elections were fair.

“Fujimori has pushed for a move tantamount to an attempted electoral coup just to bring Peru’s democracy to the brink of the abyss,” they added.

Lima’s Archbishop Carlos Castillo described as “immoral” the delay in the proclamation of the new president of the Republic. “It has already been proven that there was no fraud. Some sectors are not interested in who the President-elect is but only seek to turn the Peruvian democratic system upside down, and that is grave,” he said.

But these reasons have not been enough to stop Fujimori or dispel rumors of a coup. She has the backing of almost all of Lima’s ruling class: business leaders, the major media, and the middle class. For them, the teacher is an upstart whose rise is a threat.

“The fear around Castillo is beyond reasonable. Keiko must stop this madness and stop sacrificing democracy on the altar of anti-leftism. Peru needs a leader,” Levitsky and Vergara concluded.