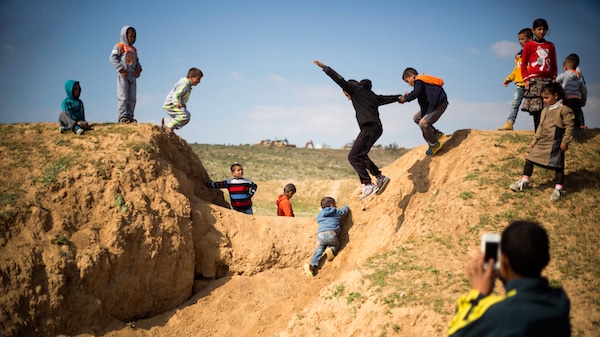 Bedouin children play before a rally marking the 40th anniversary of Land Day and against an Israeli plan to uproot the village of Umm Al-Hiran in the Naqab Desert. Ariel Schalit | AP

As I was preparing to leave Palestine, I found it harder to fall asleep. I spent the last few days in Jerusalem, mostly walking between the neighborhoods of Sheikh Jarrah in the north and Silwan in the south, crossing through the alleys of the Old City on the way. But even during the days when things had seemingly calmed down, like lava that seems to have cooled on the surface but is still hot on the inside, eruptions that tell of greater eruptions to come were everywhere.

Abdul Khaliq and Mohammed Burnat–sons of the well-known Bil’in activist and popular resistance leader, Iyad Burnat–were arrested and for days their parents knew nothing of their whereabouts. These two fine young men were kidnapped by armed Israeli terrorists. As I was driving through Jerusalem, I passed by the Moskubiya, or the Russian Compound, where they were being held. The Moskubiya is a notorious prison and interrogation center where the Israeli authorities interrogate and torture Palestinians. It sits in the heart of downtown West Jerusalem, cafes and restaurants all around it filled with people having a good time. Too bad that they cannot hear the screams of children being tortured right around the corner. 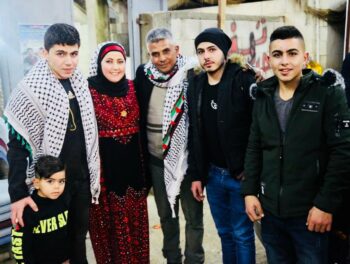 Iyad Burnat poses with his family circa 2019. Twitter | @IyadBurnat

I cannot imagine what the parents of Abdul Khaliq and Mohammed must be going through. Knowing that your children were kidnapped and are now being tortured, beaten and threatened with no one to support or help them and there is no law or authority that can provide them protection! If one or both of them were to be killed or permanently injured there would be no recourse. It is like a coming-of-age ceremony that countless young Palestinians must go through because they live on the oppressed side of an apartheid regime.

It was just a few days ago that I spent a long day driving through the Naqab. The first part of the day I was in Bir El-Saba to visit the Zionist district court, where a hearing was taking place regarding the fate of Palestinian activists from the Naqab. These were activists who had been beaten by an Israeli mob and then detained, and the court was discussing their possible release.

Later that day I drove with friends to the unrecognized village of Sawawin. We wanted to visit another local activist who had just been released from prison. The Naqab–or Negev, as Israel calls it–is the entire southern half of Palestine, and its 250,000 Palestinian-Beduin residents are citizens of the State of Israel but enjoy few if any, rights.

Out of close to 250,000 Palestinian Beduin in the Naqab, about half live in “unrecognized villages.” This means they get no services at all. There are no roads, something I was about to experience for myself, as well as no electricity or running water, no schools or medical facilities. This is the apartheid state of “Israel.” As a point of interest, it is estimated that close to half of the refugee population in the Gaza Strip, as well as over a million refugees in Jordan, are from the Naqab region.

As we were speeding down the highway in my tiny rented Citroen, I was told to slow down and look for a place to get off the main road. There was no road, just a place my friends thought was the starting point of the journey that leads to Sawawin as well as several other Palestinian villages to which the State of Israel refuses to provide services. The total population in that part of the Naqab is around 50,000.

We drove with no clear road in sight, on dirt covered in rocks, going up hills and down ravines and we were not really sure whether we were going the right way. We passed other unrecognized villages along the way and asked for directions–my friends, all Beduin Palestinians, speaking in Arabic with an accent that is unique to the Naqab. About halfway through I was urged to start driving faster, my very slow pace and the setting sun meant we would soon see nothing. 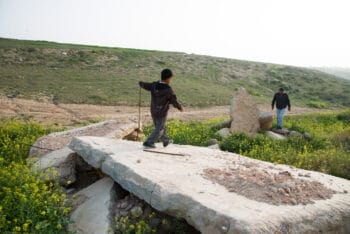 A child climbs on the remains of a home demolished by Israeli authorities in Naqab Desert. Photo | Activestills

It was about five or six miles before we reached Sawawin. The drive was long and far from safe and we had to ask for directions three or four times. I couldn’t help thinking about the possibility of a medical emergency. “How would an ambulance reach this place?” I asked. “Ambulances do not come here,” my friends responded.

If there is a medical emergency the residents need to find their way to the main road.

Six and half years in solitary confinement

We reached Sawawin as the sun was setting. We walked into a cinder block structure where about thirty men were sitting on the floor in a large circle. Some of them had their children huddled next to them. We took our places in the circle, the seated area covered by a cloth, large pillows placed on it for people to recline on, all covered in Bedouin-style cloth. Arabic coffee was served, followed by large trays of rice and chicken. Then more coffee, then tea and cigarettes.

The men were talking about prison and their experiences at the hands of the Israeli authorities. One activist leader who had just been recently released sat next to me. He told of his experience, which included six and a half years in solitary confinement. He was a political prisoner but, unlike most Palestinian political prisoners, he was not from the West Bank or the Gaza Strip but a citizen of Israel. Out of fear that he would influence the others he was kept in solitary.

At one point one of my friends spoke. He told the others–many of whom were arrested for just being at the wrong place at the wrong time, some as young as thirteen or fourteen–about their rights. He reminded them that the Palestinian Beduin in the Naqab have Israeli citizenship, which means they are tried in civilian court, not military-like the residents of Gaza and the West Bank. He reminded them that they have a right to remain silent, and a right to see a lawyer.

He also stated that the state gets around these rights by designating Palestinian detainees as “security” detainees. This means the Shabak, or secret police, have the right to keep the detainees for long periods of time and interrogate them without their seeing a lawyer.

The illusion of democracy in action

As the Israeli parliament, the Knesset, swears in a new government to replace Benjamin Netanyahu, one can see the illusion of democracy in action. It is a democracy for the few, who continue to rule and oppress the many. While many question marks regarding the new government remain–such as how long it will take before Netanyahu returns to the prime minister’s chair–one thing is clear: Mohammad and Abdul Khaliq Burnat, as well as countless others throughout Palestine, will continue to fight the apartheid regime and pay a heavy price.

Miko Peled is MintPress News contributing writer, published author and human rights activist born in Jerusalem. His latest books are ”The General’s Son. Journey of an Israeli in Palestine,” and “Injustice, the Story of the Holy Land Foundation Five.”