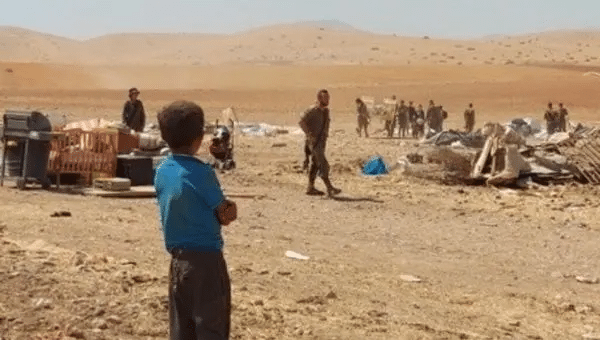 On Friday, the United Nations Office for the Coordination of Humanitarian Affairs. In the occupied Palestinian territory (OCHA oPt) territory warned that Israel is attempting to forcibly transfer the inhabitants of the Bedouin village of Humsa Al-Bqaia in the occupied West Bank.

The massive demolition and confiscation of property by Israeli forces in the Palestinian community of Humsa Al-Bqaia is “disturbing,” UN Resident Coordinator for the Occupied Palestinian Territory Lynn Hastings said, adding that “forcing this or any other community to move to an alternative site poses a serious risk of forced relocation.

Although Israel tries to justify the relocation by claiming that the area is designated for military training, “such measures by an occupying power are illegal under international law,” she pointed out and demanded “an immediate halt to all demolitions of Palestinian homes and possessions”.

Hastings also called on Israel to allow humanitarian agencies and NGOs access to the area to provide “shelter, food, and water” to the villagers so that “they can rebuild their homes in their current location and remain there in safety and dignity.

Three other families in #Humsa Al Bqai'a, comprising 18 people, including 11 children, have been affected because their livelihood structures were demolished or confiscated. 5/8 pic.twitter.com/dbPVpqlH1P

On Wednesday, the Israeli military forcibly entered the Palestinian village to demolish homes. During this operation, the Israelis blocked access to humanitarian personnel after destroying or confiscating tents, water tanks, and food and fodder supplies.

OCHA oPt indicated that the Israeli incursion left 42 people homeless, including 24 children. The Israeli humanitarian NGO B’tselem reported that nine tents, four residential huts, and 17 agricultural facilities were destroyed. The occupation forces also confiscated the Palestinians’ personal belongings and transported them to the area where they wish to relocate the people.

The inhabitants of Humsa Al-Bqaia became homeless in November 2020, when their homes were demolished by the Israeli army. However, many of them did not leave the territory and re-erected temporary dwellings.

Located in the Jordan Valley near the Jordanian border, Humsa Al-Bqaia is one of 38 Bedouin villages that are dedicated to livestock farming and whose dwellings are usually tents made of metal and other rudimentary materials.

Israel frequently demolishes these structures on the grounds that they lack permits. The UN and several international organizations, however, have denounced that it is impossible for Palestinians to obtain such permits.

#Palestine | Israeli attacks on the Gaza strip continue to escalate on Saturday with the latest strike on a 14-story tower home to international news agencies. pic.twitter.com/3Qt85iyNe2