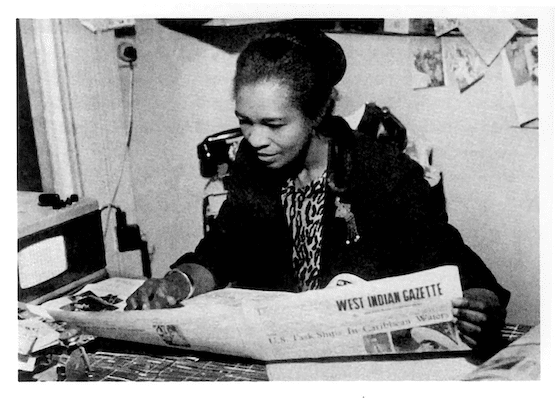 The tradition of Caribbean intelligentsia insists on a grounding with the masses against the elites.

What then are the responsibilities of Caribbean intellectuals? I draw my definition/sense of the intellectual here from figures as diverse as Antonio Gramsci, Edward Said, Claudia Jones and Audre Lorde. For the purposes of this essay I am twinning the thought of George Lamming and Walter Rodney–specifically Lamming’s succinct description of an intellectual as someone whose fundamental orientation is a life of the mind, whose oxygen is ideas, with Rodney’s emphasis on the responsibility of the intellectual to the struggle over ideas, against bourgeois knowledge and towards human freedom. In the Caribbean, this draws us immediately towards our towering social commentary calypsonians, artists, writers and social activists. The style and depth of engagement with this strange enterprise that is life is what marks one as an intellectual, and is vastly more important than the work through which one spends most of one’s waking hours. I am choosing to group the responsibilities of Caribbean intellectuals into seven overlapping categories–unsatisfactory perhaps given the stakes of what I am trying to convey, but with intimations towards a future imperfectly articulated in this reflection.

First, she should throw in her lot with the most radical and discerning social movement of her time, and contribute her intellectual labor towards their goal of human freedom. There is no purpose or honor in remaining removed or detached from the social justice movements of one’s time, however ambivalent or contradictory their manifestations may be. Nor is the tradition of Caribbean intelligentsia one removed from its people, the tradition insists on a grounding with the massive against the elites. Wherever one goes–and Caribbean people are perpetually mobile – you must be socially and politically conscious, and active everywhere. The contemporary movements here are reflected in the self-activity of Caribbean people rising against the oppression of patriarchal rule and men’s violence, the class domination intrinsic to capitalism, the denials of citizenship and violence towards LGBTQ persons, antiblack racism locally, hemispherically and globally.

Second, the Caribbean intellectual takes her greatest sustenance from the marvelous tradition of Caribbean thought–beyond the boundaries of Western thought. The allure of Caribbean thought is mesmerizing and renowned worldwide, with a style that shelters the hope of living in a world beyond domination. Jose Marti would call this living in a world in which humans live not as wolves among wolves but men among men, Sylvia Wynter would speak of the confrontation between plantation and plot, “between those who justify and defend the system; and those who challenge it.” There is no tradition worth having which is not to be argued with, but there is no culture worth sheltering that does not acknowledge and honor the thought of its ancestors, and Caribbean thought gives us more conscious control over the ideas by Caribbean people over space and time in the pursuit of human freedom.

Thirdly, the Caribbean intellectual should unashamedly proclaim a love and appreciation of the Caribbean popular, as the site of embodied expression of human freedom beyond colonialism, and evidence of a revolution in consciousness impossible to discern in our public institutions. The Caribbean popular does not need intellectuals for its validation, as C.L.R. James knew over fifty years ago in Havana when he said that “intellectuals should prepare the way for the abolition of the intellectuals as embodiment of culture.” The terrain of the popular will always be in advance of its interpreters, its meaning always elusive. Yet the Caribbean intellectual can assist the process of clearing the ideological ground on which the popular’s greatest practitioners tread, from conservative attacks, so that its artists can concentrate less on attacks on their legitimacy, but instead, creation.

Fourthly, the Caribbean intellectual yearns for the unity of the region, a form of solidarity and commonality that holds the never refuted best chance of Caribbean people living in nations that are not the prey of Western powers. Lloyd Best would sigh here that he longs to be “part of a grand Caribbean sou-sou”, David Rudder begs his people to please remember the colonial sources of the inter-island suspicion and quarrels so debilitating even when not violent, or perhaps put differently violent because they are so debilitating. The unity of Caribbean people does not require the tomes of the economist or the technocracy of the public official, it is the lived reality of many Caribbean people. The puzzle remains to give institutional form to felt conviction in the interest of Caribbean self-determination.

Vision beyond tragedy is the next responsibility–that the disasters that roar so often through the Caribbean do not become an alibi for anomie, despair, a lethargy of will, or an absence of vision. The disasters the Caribbean has endured this century–from the Haitian earthquake of 2010, the greatest calamity to befall the region since slavery, to the current climate crisis and its unleashing of deadly hurricanes that have caused so much anguish throughout the region–are without doubt terrifying. But what must be resisted is the license it gives state managers to abandon the limited social democracy so hesitatingly proffered at independence, and surrender to a neoliberal logic that places profits over people, commodifies the Caribbean land and sea space, and suggests there is no future for these countries except as service appendages of global capital.

The reality is that vulnerability, calamity and neocolonialism will endure in the foreseeable future. Yet the next obligation of Caribbean intellectuals is to facilitate, through historical analysis and a presentation of socio-economic options, the resilience and survival of the community. How can one consume ethically in a neocolonial economy, George Lamming once mused. But that we must. The grounding expectation here is what it always has been–to produce for human needs rather than desires manufactured from the salesman’s lies, to energize a process of production that expands human creativity and produces goods and services which do not accelerate the destruction of the planet, and fulfill human happiness. Impossible in a capitalist system, many would argue, and I agree with them. Which is why the transformation needed will inevitably travel a path towards a renewed socialism – made for the first time to the measure of a Caribbean consciousness.

And finally, seventhly, the grandest ambition of Caribbean intellectuals–to complete the process of emancipation. This is a quest to honor ancestors, to become one in turn, and to be qualified to live forever among those who have done so much to enchant human life in this region.

My reading of the contemporary Caribbean leads me to the urgent belief that it must recreate itself anew. This transformation will mean a different political economy, political arrangements beyond elite domination, and an entirely different structure of feeling in the realm of our public and private citizens lives. It is a quest that falters in me as in all others who dream of different Caribbean world. But it is a vision we cannot live without.

Aaron Kamugisha is Professor of Caribbean and Africana Thought at the University of the West Indies, Cave Hill Campus.