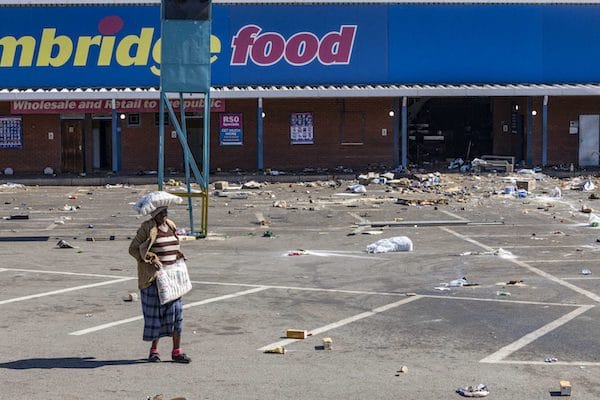 The government must immediately institute a basic income grant as an emergency measure if it wants to stop food riots from taking hold permanently, say activists.

With the expanded unemployment rate at 43.2%, its highest level ever, it would be foolish to label everyone who participated in the “Free Zuma” protests and took food from major supermarkets as “irrational and criminal”, says Mervyn Abrahams, programme director of the Pietermaritzburg Economic Justice and Dignity group.

“These protests are driven by economic issues, not so much the political issue of freeing Jacob Zuma. What was required was a flame and the Free Zuma campaign was that. These protests are not even isolated to food but have provided a cover for people who feel excluded economically to just come and take over,” Abrahams says.

People cannot wait any longer. They are in the midst of absolute poverty. People are hungry and we have to meet the hunger needs now. It calls for an immediate emergency intervention and then long-term systemic change.

The government discussed a basic income grant in 2002 but put it on hold. It is seen by the unions, social movements and public-interest law centres in the #PayTheGrants coalition as one of the best available tools to reduce poverty quickly.

The group also predicted last month that high food prices and low levels of jobs could lead to social disorder with protesters losing restraint and potentially curbing the movement of goods and public services on highways.

Ten days later, protesters set fire to dozens of trucks in KwaZulu-Natal and closed both the N2 and N3 highway in places.

“In this situation, the right of a hungry child and her hungrier mother to exist, to survive and to eat will become far more important than any right to private property,” Abrahams says.

Protests surged and took on the radically new dimension of riots, however, on July 11 and 12. The government announced on July 12 that it would deploy the army to stop the riots. But with 11.4 million people of working age currently unemployed, the minimum wage rising by only 4.5% in April 2021, and food, transport and electricity prices increasing by between seven and 15%, millions of people can no longer survive, says Abrahams. He says containing dissent is not a long-term solution.

To negotiate an end to the food riots, the government could also immediately reinstate and increase the COVID-19 social relief of distress (SRD) grant of R350 a month, which it terminated in April 2021, and top up the child support and old age grants as it did during the first wave, says Abrahams.

We must not do what we always do and that is go ‘back to normal’, because it is the abnormality of our situation that gave rise to this. After an emergency intervention, we need to set up an economy that will allow everyone to feel they are included, and a basic income guarantee would be one of the instruments of this.

Speaking at a “Pay the Grants” mass assembly held to call for a basic income grant on 11 July, Wanga Zembe-Mkabile, specialist scientist at the Medical Research Council, said the grant was urgently needed to minimise the high levels of poverty and inequality now causing devastating levels of “hunger, hopelessness, depression and despondency”.

“The SRD grant represented hope. It made people feel seen and recognised by the state, and addressed some of the psychological impacts that crop up when there is no provision for an entire segment of the population, such as the unemployed,” Zembe-Mkabile said.

The discontinuation of the grant, small and inadequate as it was, means a return to that hopelessness and invisibility. There’s a full expectation that if this continues, the levels of food insecurity and hunger we are seeing will only get much worse than they already are.

Pushed past their limits

Socialist activist Alfred Moyo, the Gauteng coordinator for the Fight Inequality Alliance and a resident of Makause shack settlement in Primrose, says the latest lockdown pushed impoverished people past their limits.

Unemployed Peoples’ Movement spokesperson Ayanda Kota says his organisation also backs the basic income grant. But he points out that it is not feasible for social movements “who are struggling for emancipatory politics to support struggles that are organised on tribalist, male chauvinist and ethnic bases, everything that we are opposed to as people that are struggling for emancipatory politics”.

The reality of the matter is that people are hungry and are using this opportunity [the Free Zuma protests] to demonstrate the level of hunger in this country. Our call should be to intensify the demand for the government to implement the basic income grant because the Radical Economic Transformations, the Edward Zumas, don’t stand with the people on a principled basis. Their aim is only to dethrone the current regime so they can take over to do the same–loot, Kota says.

In the wake of the riots, affected provinces such as KwaZulu-Natal and Gauteng could face a week-long bottleneck in which food will not be as readily available in supermarkets. But street traders have mainly not been harmed by protesters, who focused on major supermarkets, so they will likely see an increase in the number of customers coming to them to buy food, Abrahams says.

This article was first published by New Frame.