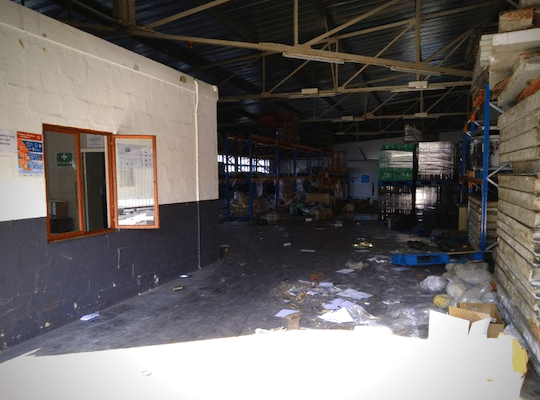 The Durban warehouse of food bank FoodForwardSA was ransacked, stopping food supplies to 125,000 people. The organisation has temporarily closed its other branches. Photo: supplied

The Durban warehouse belonging to FoodForward SA was ransacked on Tuesday, prompting the organisation to close all its branches in five cities, leaving some 675,000 people without the food it supplies.

More than 125,000 vulnerable people depend on the food sourced from the Durban warehouse, according to FoodForward SA’s fund development manager, Deidre Adams.

She said looters had taken all the food in the warehouse. “They also vandalised our vehicles and managed to steal one of our eight-ton refrigerated trucks,” said Adams.

A truck like that costs over a million. These are speciality trucks because they are refrigerated. The infrastructure is also expensive because we need to maintain the cold temperatures since we distribute fresh produce as well.

We serve a network of about 1,200 registered beneficiary organisations around the country and it enables us to feed around 675,000 people daily.

Our Durban branch serves beneficiaries in KwaZulu-Natal and the Free State.

Adams said they had not yet estimated the value of the food lost “but we know it’s going to be millions because they took everything.”

We decided to also close all of our branches, not only the Durban branch, for the rest of the week because of safety issues. So there is now going to be heightened food insecurity amongst all the 675,000 people.

This means that vulnerable people are not going to be able to access food.

Beneficiary organisations visit the FoodForward warehouses once a month for their allocations of perishable and non-perishable food items including canned goods, rice, maize, fruit and vegetables. “They use the food to cook for their beneficiaries,” said Adams.

“The organisations who relied on us are not getting food. That’s the really sad part.” said Adams.

She said the extent of the damages in Durban will only be assessed next week, and a decision will be taken then when to open the other branches.