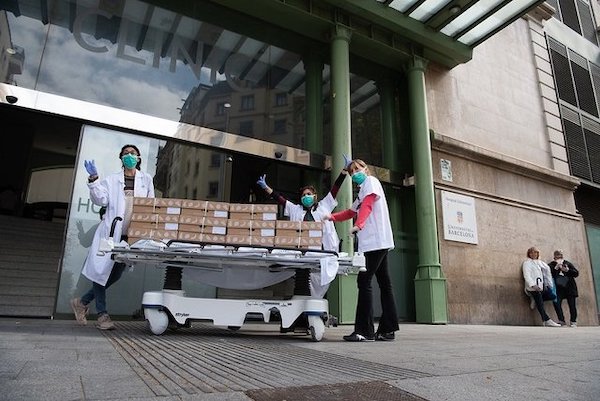 The spokesperson of CADTM International, Éric Toussaint, responds to the questions of the L’Anticapiltaliste weekly .

The spokesperson of CADTM International, Éric Toussaint, responds to the questions of the L’Anticapiltaliste weekly.

Marxists often hesitated at the beginning of the present economic crisis: was it a classic, fundamentally capitalist crisis whose warning signs had already been in evidence or was it a specific crisis resulting from the pandemic?

Éric Toussaint:  The answer is plain to see: the two explanations are not contradictory. A combination of the two enables us to understand what has been happening right before our eyes. Before the Covid pandemic, in 2019, a classic capitalist crisis had begun. There was a significant reduction in industrial production in Germany and in several industrial sectors of the USA; there was an economic slowdown in China in 2019, the beginning of a financial crisis in the United States in September 2019, a fall-off of productivity in the major economies, and profit rates were either stagnating or had fallen.

As this classic crisis was worsening, it was followed in China in December 2019 then in Western Europe, North America and the rest of the world in March 2020 by an enormous health crisis bringing chains of production, supply and distribution to a standstill. Those economists who deny the direct and specific effects of the pandemic on the economy are mistaken, as are those who claim that the crisis is due to an external shock factor, meaning the effects of the pandemic on the economy.

Unlike the illusions some people nurture concerning the relaxation of institutional constraints (by the EU, the IMF etc.) and the fall in interest rates, constraints linked to public debt have certainly not disappeared. How do you see the “post-Covid” situation in the North and the South?

ÉT: You are quite right to say that some on the Left have a marked tendency to present the new policies of central banks and governments since March 2020, increasing budget deficits and public debt, as a fundamentally positive turnaround. The danger is that this leads them to lower their guard and be less critical of the economic policies brought to bear and of institutions like the ECB, the European Commission and national governments. Yet increasing public debt serves to set up social cushioning (unemployment benefits, one-off financial aid for households and certain sectors of the economy that have been particularly hard hit) without taxing capitalists and their companies. Nor has there been any real refinancing of the public health sector. The constraints linked to public debt have been considerably eased in the short term, but the backlash of austerity and new structural measures will come in a year or two. When the European instances insist on discipline in applying their treaties, public debt will have increased so much that there will be strong demands for deep budget cuts in public and social spending, combined with a demand for new counter-reforms regarding the rights of workers and social welfare recipients.

What they should have done was to increase the public deficit to finance a vast spending programme while at the same time complementing that policy with 1% taxation of the wealthiest section of society, whether that wealth be in property or income. In the end, the public spending recovery plan is very limited and entirely funded through loans.

Among the new attacks that must be resisted are the acceleration of automation/ robotization of work; the generalization of working from home where workers are isolated, even less able to manage their time and have to carry a whole series of extra costs connected to their work tools which they wouldn’t have to pay for if they were physically in their workplace. There are new attacks on public education, with the development of distance-learning which increases cultural and social inequality; there is greater surveillance of private life and control of personal information; means of repression have been reinforced.

Lastly, it is obvious that the coronavirus pandemic has further increased the unequal distribution of income and property ownership. Inequality in face of illness and death has also risen dramatically.

Governments and Big Capital will only abandon this offensive against the interests of the overwhelming majority of the global population if very powerful mobilizations force them to make concessions or if a social revolution carries the day.

The struggles that have erupted on several continents since June 2020, especially the massive anti-racist struggles under the Black Lives Matter banner, show that the popular classes and young people of the world are not prepared to accept the status quo. In 2021, the enormous popular demonstrations in Colombia, the progress seen in elections in Chile and Peru, and more recently at the end of May and on 3 July, the “anti-Bolsonaro” demonstrations in Brazil highlight yet again the massive resistance of the peoples in Latin America.

We have to contribute as much as possible to enabling a powerful new social and political movement to bring together the social struggles around the world; we must take part in drawing up a programme to make a break from capitalism, by putting forward solutions that are anti-capitalist, anti-racist, ecological, feminist and socialist.

Faced with the multifaceted crisis of capitalism and its headlong rush towards environmental disaster, trying to fix or adapt capitalism is not really an option. It would merely be a lesser evil that would not bring the radical solutions that the situation demands.

In a recent article, you cite Lissagaray, a historian and activist in the Paris Commune, who wrote of the Banque de France: “the Commune stopped short in front of the Bourgeoisie’s strong-box”. It is an eternally relevant question: how would you phrase it today?

ÉT: The Banque de France was at the heart of the Paris Commune. Following the events of March 1871, the Communards didn’t take over the Bank, which remained in the hands of the Thiers government and continued to finance it. (It received over 350 million gold francs, 20 times more than the Commune got).

It was Charles Beslay, who was a Proudhonian and the Commune’s delegate to the Banque de France, who convinced the Commune not to “violate” (sic) or take control of the Bank. Beslay thus enabled the Banque de France to continue to finance Thiers who in turn was able to reorganize the Army and put down the Commune. For Beslay, the Bank was France’s wealth and to take it over would have signalled chaos. Significantly, Beslay was the only leader among the Communards not to be executed, imprisoned or deported. He took refuge in Switzerland with Thiers’s permission.

The chaos argument has been used repeatedly over the centuries. We heard the same thing in Greece from Varoufakis when he and Tsipras decided to leave the Governor of the Bank of Greece in place despite him being a faithful ally of the Troika and private Greek bankers. On the contrary, the Cuban revolutionaries took control of the Bank of Cuba as soon as the revolution triumphed in 1959 and Che Guevara became its governor. As for the Soviet government, it expropriated all the Russian banks in December 1917.

When it comes to central banks, private banks and the finance sector in general, we note an extremely serious erosion of the programmes of leftward-leaning organizations. In 2019, the Labour Party Manifesto, under the leadership of Jeremy Corbyn, although radical on a series of issues like renationalization and the cancellation of student debt, was silent regarding the City of London and the Bank of England. Bernie Sanders’ programme in 2019-2020, radical on issues of taxation and student debt, was also silent about the Federal Reserve and the major private banks. Programmes of other political organizations like Podemos, Diem25 or Die Linke, are either silent or very moderate on the subject and therefore have nothing to offer regarding the Central Bank, the big private banks, currency and public debt.

More generally, in financial matters, the solution is obvious: there must be suspension of debt payments without any penalty for delay. Beyond suspension of payment, in each country there should be debt audits carried out with the active participation of citizens, to determine the illegitimate, odious, illegal or unsustainable parts of public debt, which must then be cancelled. The CADTM, which is a global network mainly active in the South of the planet but also in the North, takes the position that the need to have recourse to suspension of payments and debt cancellation concerns not only the developing countries, emerging or not. It also concerns the countries of the North.

It is also time to brave the issue of cancellation of abusive debts demanded of the popular classes.