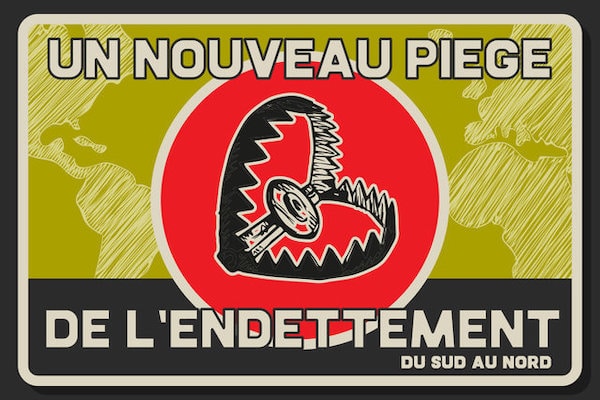 We deepen our analysis by focusing on various regions. After Latin America and the Caribbean and Sub-Saharan Africa, we continue with the Middle-East and North Africa (MENA).

Graph1: Comparison between borrowed and repaid amounts per year (long-term total external debt–in billions of US$)

Graph 2: Comparison of the evolution of total debt stock with net transfers (long-term total external debt–in billions of US$)

As formerly mentioned, from 2000 to 2006, debt servicing outreached borrowed amounts while the debt stock increased only moderately. Net transfer was generally negative. In the following period from 2008 to 2019 net transfer became positive. We notice an exception in 2015, when commodity prices plummeted. On the whole both debt stock and debt servicing have increased dramatically.

Note that the WB classification is questionable. However, we have decided to use it so that we can make use of WB data. The countries in brackets are not included in WB debt data although Syria and Yemen which are both going through wars are included.

For a critical approach to the categories used by international institutions, see: ‘South/North / Developing Countries/Developed Countries–What is it all about?’ www.cadtm.org

Graph 3: Comparison of the evolution of total debt stock by category of creditors (in billions of US$)

In the graph above, we can see the two stages previously referred to, with a reduction of debt from 2004 to 2006 corresponding to an increase in revenue along with an increase in commodity prices. From 2006 onward, public external debt increased moderately before spiralling out of control from 2008. We may also distinguish four categories of creditors:

Graph 4: Comparison between the progression of the total debt stock and of the net transfers on the public external debt in MENA (in $billion) 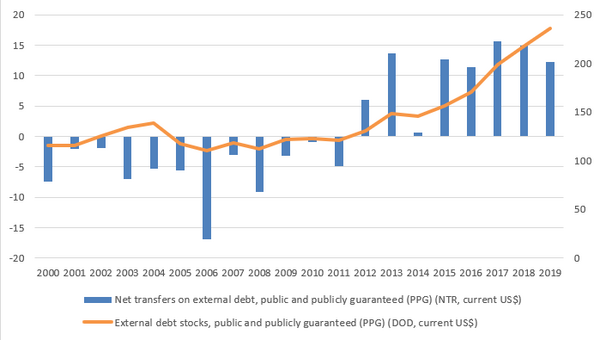 In the graph, columns in orange refer to net transfer.

From 2000 to 2019, the region’s public external debt doubled; however not in the same manner for all the MENA countries. Algeria for example is among the ten least indebted countries in the World owing less than $5.5 billion in 2019, that is 3.3% of its GRP (see Box); while others sank deeper into a permanent debt crisis.

Over these two decades several countries have drastically reduced their foreign debt either by choice, such as Algeria (-94%), because of sanctions, such as Iran (-93%) or a period of conflict such as in Syria (-23%). Consequently, these countries have seen their net transfers become markedly negative (Algeria -US$ 34 billion; Iran -US$ 11 billion and Syria -US$ 1.4 billion). Others have seen their levels of debt increase enormously. If Western capital inflows (2008-2019) and outflows (2000-2008) must be taken into account (as described in part 1) with commodity price fluctuations (as described in part 3) as in the case of Morocco (+111%), new debts were also granted by the International Financial Institutions (IFI), particularly the IMF, after the Arab Spring in order to continue paying the existing odious debt and applying neoliberal policies. (Tunisia + 168%; Egypt + 270%). Three other countries have sunk into a crisis of permanent debt (Jordan + 176%, Lebanon +378%, Djibouti + 801%). Except for Lebanon, these five countries have returned to a positive net transfer position as from 2011.

Box: The case of Algeria and other commodity exporters: suggested alternatives

Although the numerous social claims, as from 2006, delayed capital investments in the MENA region by three years, the same tendencies are observed as in other developing countries. An earlier period showing a generally stable foreign debt situation with negative net transfers is followed by a period showing a complete reversal of the situation. Between 2000 and 2011, the net transfer is negative (-$67.23 billion), equal to 4% of the total GRP in 2011, after which, the balance became positive for eight years (+$20.13 billion).

In 20 years, 60% of the DCs in the region, that is eight countries, have called on the IMF for funds. They have borrowed $35 billion, and have since reimbursed $13 billion, of which 15% is interest and servicing charges. Among the most implicated are Egypt, Lebanon and Tunisia.

Similarly, if the evolution of the public external debt of the MENA DCs by category of creditors roughly coincides with that of the DCs as a whole, it nevertheless includes certain specificities. Formerly the greater part, the bilateral share now represents only one quarter of the public external debt. The multilateral share has gained in significance: in absolute figures, it multiplied threefold between 2000 and 2019 (including the IMF credits which multiplied more than sixfold). In this interrelated structure, the share in the form of sovereign securities (bonds) has grown considerably, now representing one third of the total. In absolute figures, the total amount of sovereign bonds or securities has increased tenfold (from $7.32 billion to $77.96 billion). These sovereign securities are traded on the financial markets, almost exclusively Wall Street, from 2008 onward.

Table 1: Evolution of MENA countries public external debt by category of creditors between 2000 and 2019, in absolute and relative value

Also, Djibouti is in an over-indebted situation and one in three of the DCs of the region have suspended payments. 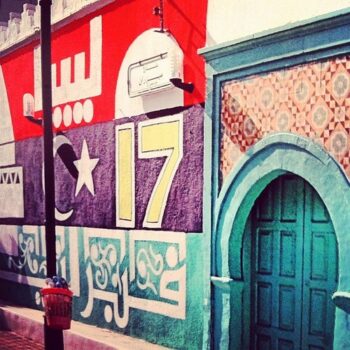 “Arab Spring” by enric archivell is licensed with CC BY-NC-SA 2.0. To view a copy of this license, visit https://creativecommons.org/licenses/by-nc-sa/2.0/

Although not the most commodity-dependent region, 13 countries (at all levels of income) remain highly exposed to fluctuations in commodity prices and export revenues. Agricultural products and fossil fuels are the most concerned (see Table 2). In particular, 7 of the 13 members of the Organization of Petroleum Exporting Countries (OPEC) are MENA countries.3 Faced with the prolonged decline in oil prices, OPEC countries have agreed several times to limit production in order to push prices up.

2.3 Fluctuation of exchange rates against the Dollar and the Euro 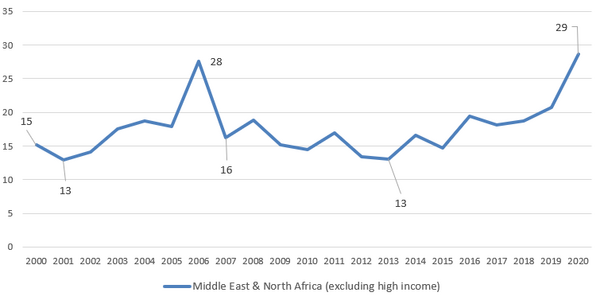 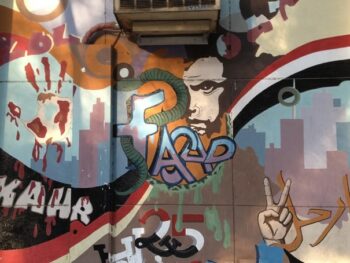 “Egypt Revolution Grafitti – 15” by Courtney Radsch is licensed with CC BY-SA 2.0. To view a copy of this license, visit https://creativecommons.org/licenses/by-sa/2.0/

In 2019, 46% of MENA DCs (Djibouti, Egypt, Jordan, Lebanon, Morocco, Tunisia) paid out more to service debt than was spent on health care. Debt servicing by these ten countries absorbed between 10.6% and 41.2% of States’ revenue.5

In the space of two decades, the region’s debt service has nearly doubled, from US$15.12 billion to $28.65 billion after having passed a peak in 2006 when oil prices were high. At that moment Algeria made advanced repayments to its Paris club creditors.6 The high increase in debt servicing observed as from 2018 is the effect of an IMF conditioned loan of $12 billion, granted in 2016, to Egypt.7

Around the end of 2010 and early 2011 the region went through a wave of uprisings against established dictators and neoliberal domination by the IFIs. The new governments followed the same neoliberal policies financed by more borrowing. The same policies that deteriorated the populations’ living conditions led to another wave of protestation throughout the region starting in October 2019.

The impact of the Coronavirus crisis will further deteriorate the social conditions of the working class, especially those most vulnerable: women, children, youth, the elderly and refugees. The economic downturn caused by the pandemic is pushing an additional 8.3 million people in the region into poverty.8

The MENA region has the highest rate of youth unemployment in the World (averaging over 27%) where the unemployment rate for young people is five times that for adults with 80% of them reduced to informal-sector work which is very poorly paid.9 In Tunisia, in 2021, the unemployment rate is overwhelming, (a principle cause of the December–January 2011 protests) especially for the young in the hinterland where unemployment rates often rise to 40%. These are the young Tunisians who invaded the streets of Tunis in January 2021 on the tenth anniversary of the 2011 revolution.

COVID-19 has further widened the wealth gap between rich and poor in MENA countries, which already appears to be one of the most unequal regions in the world: 37 billionaires possess as much wealth as the poorest half of the adult population.10 The Middle East appears to be the most unequal region in the world, with the richest 10% capturing 64% of income, compared to 37% in Western Europe, 47% in the U.S. and 55% in Brazil.

According to Piketty, Alvaredo and Assouad, the richest 1% in the Middle East capture a much larger percentage of income than in other regions or countries: “The income share of the top percentile is about 30% in the Middle East, compared to 12% in Western Europe, 20% in the United States, 28% in Brazil, 18% in South Africa, 14% in China and 21% in India”.11

The World Bank estimates that for the whole MENA region the cost of the Coronavirus pandemic is about $116 billion, about 3.7% of the region’s GRP.

The IMF has indicated that boosting growth may require financing beyond the substantial $170 billion envisaged for 2021, adding to the already high financing needs of some of the countries. 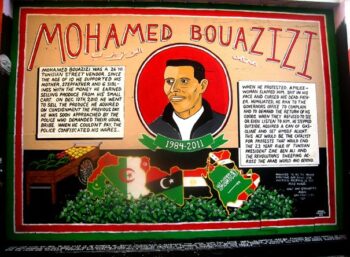 “Mohamed Bouazizi” by niawag is licensed with CC BY-NC 2.0. To view a copy of this license, visit https://creativecommons.org/licenses/by-nc/2.0/

Governments in the region have decided to borrow their way out of the financial aspects of the crisis. The region has entered a new wave of indebtedness and pursuit of neoliberal policies.

As in other regions of the World, public foreign debt has greatly increased in the MENA region. The economic crisis makes the normal course of repayments much more difficult. The two massive waves of popular revolt known as the “Arab Spring” were the natural outcomes. Under these circumstances it is totally justified to suspend debt repayments and to repudiate illegitimate debts.

Numerous social movements in the Arab countries have called, in April 2020, for debt cancellation and withdrawal from free-trade treaties in order to confront the repercussions of the economic crisis and the Coronavirus pandemic.

The appeal was also supported by more than 100 associations, organizations and networks from Africa, Asia, Europe and Latin America in eight languages.

Further articles in this series will examine the tendencies of the debt burden in other large regions of Asia.