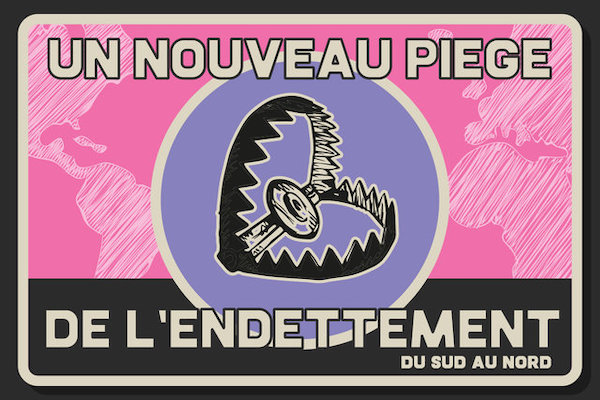 In the previous three parts we have observed the evolution of the DCs’ external debt over the last twenty years. The first part shows a dramatic increase of indebtedness, which multiplied by 2.5 with a steep acceleration from 2008 onward. The second part highlights the main threats on the DCs’ external debt, among which the growing significance of bonds, the evolution of interest rates and the depreciation of their currencies against the U.S. dollar. The third part examines the various factors that lure DCs into the debt trap: dependence on commodities, drop in foreign exchange reserves, inflating repayments, conjuncture of a multi-dimensional crisis aggravated by the COVID-19 pandemic, etc.

We deepen our analysis by focusing on various regions, starting with Latin America and the Caribbean.

Graph 1: Comparison between loaned and repaid amounts per year (long-term total external debt–in billions of US$) 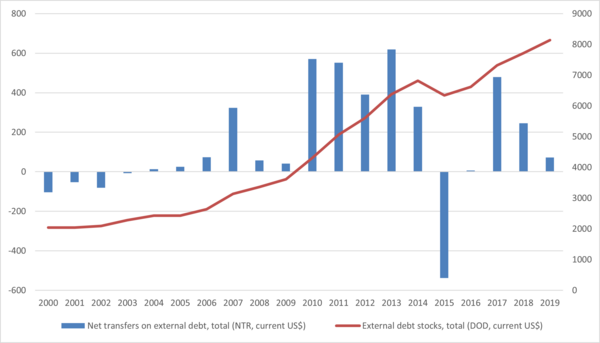 As formerly mentioned, from 2000 to 2006, debt servicing outreached borrowed amounts while the debt stock increased only moderately. Net transfer was generally negative. In the following period from 2008 to 2019 net transfer became positive. We notice an exception in 2015 when commodity prices plummeted. As a rule both debt stock and debt servicing have increased dramaticaly.

Population in Latin America and the Caribbean in 2019: 646 million, among which, population of DCs: 613 million.

Note that the WB classification can be questioned. However, we decided to use it to accommodate easier use of WB data. For a critical approach to the categories used by international institutions, see: ‘South/North / Developing Countries/Developed Countries–What is it all about?’ https://www.cadtm.org/South-North-Developing-Countries-Developed-Countries-What-is-it-all-about

Graph 3: Evolution of the public external debt of the Latin American and Caribbean Region by creditors (in billions of US$) 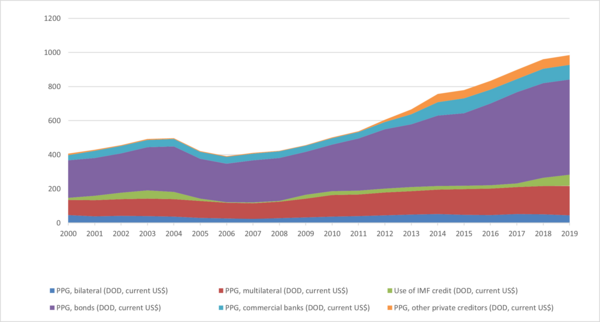 In the graph above, we can see the two periods previously referred to, a reduction of debts from 2004 to 2006 with an increase in revenues along with an increase in commodity prices, followed by a constant increase of the debt from 2007 onward. We can also distinguish four categories of creditors:

Graph 4: Comparison between the evolution of the total debt stock and of the net transfers on the public external debt of Latin America & the Caribbean (in billions of US$) 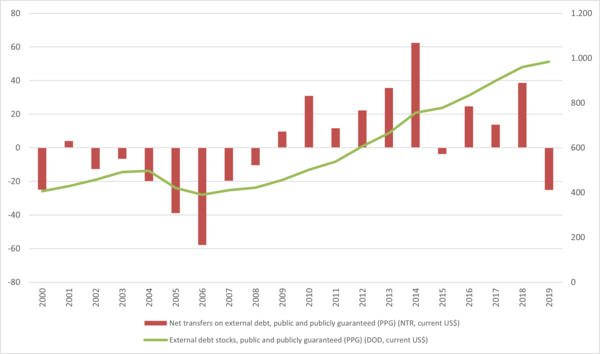 Remember that the net transfer refers to the difference between what a country receives as loans and what it pays out (capital and interests included, also called debt servicing). If the amount is negative, then it means that the country paid out more than it received.

It is also significant that all 22 DCs of the region except Guatemala and Venezuela, and of course Cuba called upon the IMF over those twenty years; they borrowed $135 billion from the IMF and have repaid $105 billion, including 12% in interests alone.

Among the countries that have been most badly hit by the IMF loans and austerity policies are Argentina, Ecuador, Haiti and Suriname.

The evolution of the DCs’ public external debt by categories of creditors in the region corresponds with the general picture for DCs, i.e. a limited share of bilateral and multilateral loans, and a steep increase of the share owed to various kinds of private creditors, particularly of sovereign bonds sold on financial markets, most often Wall Street, from 2008 onward. Except for Haiti, a low-income country, the other countries can borrow on the financial markets.

While the region is not the one in the world that most depends on commodity exports, 17 countries are still highly exposed to price fluctuations that affect their export revenues. This applies to the exportation of agricultural products (Argentina, Belize, Brazil, Ecuador, Guatemala, Paraguay, Uruguay), fossil fuels (Bolivia, Columbia, Ecuador, Mexico, Saint-Lucia, Trinidad & Tobago, Venezuela) and ores (Chile, Guyana, Jamaica, Suriname).4

Graph 5: DCs’ debt servicing in the Latin American & Caribbean region (in billions of US$) 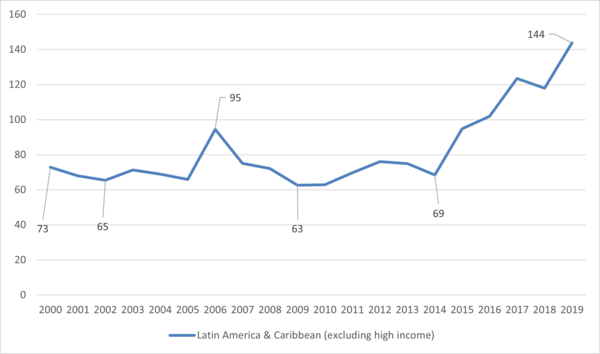 Over twenty years, debt servicing needs in the region literally exploded, as it moved from $72.86 billion to $143.74 billion). In 2019, 43% of those DCs devoted more resources to debt servicing than to health expenditure (Argentina, Belize, Dominica, Ecuador, Grenade, Haiti, Jamaica, Salvador, Saint-Vincent & Grenadines). Debt servicing on those 10 countries amounted to between 6.7% and 38% of State revenues.6

Public debt has steeply increased in Latin America and in the Caribbean. The global economic crisis makes repayment more difficult. While the continent is deeply affected by the coronavirus pandemic with over 235,000 deaths in Brazil, over 170,000 in Mexico, over 56,000 in Colombia, over 50,000 in Argentina, over 41,000 in Peru,7 suspending debt repayment is more justified than ever. It is in fact a sine qua non condition to rechanneling public spending and relieving the consequences of the pandemic, the impact of the economic crisis, and the climate crisis.

The series continues with analyses of how indebtedness developed in other regions of the Global South.