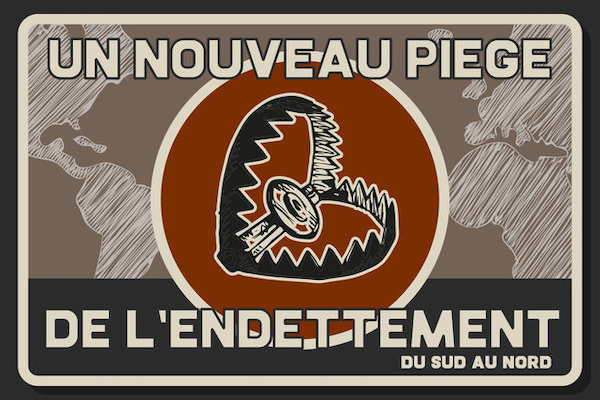 In Sub-Saharan Africa, where health spending and human development levels are in a dramatic state, there is a stronger case than ever for unilateral suspensions of debt payments based on arguments recognized in international law; such as state of necessity and fundamental change of circumstances. This is a sine qua non condition for urgently reallocating public expenditure and creating the means to relieve certain effects of the pandemic. Such a suspension of payments must spur governments to take further steps to liberate human development, namely to move away from the neo-liberal framework while repudiating debts identified, through a process of citizen debt auditing, as illegitimate.

We deepen our analysis by focusing on various regions, After Latin America and the Caribbean we continue with sub-Saharan Africa.

Graph 1: Comparison between loaned and repaid amounts per year (long-term total external debt–in billions of US$))

As formerly mentioned, from 2000 to 2006, debt servicing outreached borrowed amounts while the debt stock increased only moderately. Net transfer was generally negative. In the following period from 2008 to 2019 net transfer became positive. We can notice an exception in 2015, when commodity prices plummeted. On the whole both debt stock and debt servicing have increased dramatically.

In 2019, the population of Sub-Saharan Africa (where all countries are developing countries) was 1.107 million.

Note that the WB classification can be questioned. However, we decided to use it to accommodate easier use of WB data. For a critical approach to the categories used by international institutions, see: ‘South/North/Developing Countries/Developed Countries–What is it all about?’ https://www.cadtm.org/South-North-Developing-Countries-Developed-Countries-What-is-it-all-about.

Graph 3: Comparison of the evolution of total debt stock with net transfers (long-term total external debt–in billions of US$)

In the graph above, we can see the two stages previously referred to, with a reduction of debts from 2004 to 2006 corresponding to an increase in revenues along with an increase in commodity prices. For this region in particular, one must also take into account the HIPC initiative launched in 1996, an initiative that “cancels” 90% or more of non-ODA bilateral external debt (see Box 1) under the constraint of austerity policies imposed by the IMF. Of the 38 countries concerned, 34 are in Sub-Saharan Africa. It should be noted that 25 years after its launch, Eritrea and Sudan have still not seen this conditional cancellation applied, mainly because of payment arrears to the Bretton Woods institutions. From 2006 onward, public external debt increased moderately before spiraling out of control from 2008. We may also distinguish four categories of creditors:

Graph 4: Comparison between the evolution of the total debt stock and of the net transfers on the public external debt for Sub-Saharan Africa (in $billion) 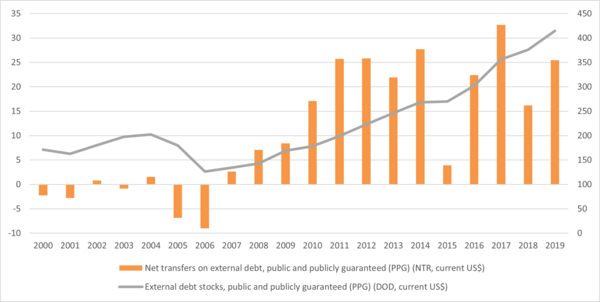 Over twenty years these countries borrowed $40.8 billion from the IMF and have since reimbursed $21.8 billion, of which, 19% is interest and fees

The number of countries that have called on the IMF for funds over the same period is also telling. Forty-seven of them did so, in other words all of them except Eritrea, which has been awaiting HIPC measures since 1996. Over twenty years these countries borrowed $40.8 billion from the IMF and have since reimbursed $21.8 billion, of which, 19% is interest and fees.

Sub-Saharan Africa is the region of the World that is the hardest hit by the IMF and its austerity policies imposed through structural adjustment plans since the 1980s, the HIPC initiative since 1996 and since April 2020 the Debt Service Suspension Initiative (DSSI). Among the worst hit countries are Côte d’Ivoire, Madagascar, Niger, Senegal, Congo (Democratic Republic) Togo11 and numerous Central African countries.12

In absolute values, the foreign debt of Sub-Saharan DCs has followed the same course as the general course that DCs’ foreign debt has followed, with a rapid acceleration of indebtedness from 2008.

On the other hand what is distinctive of the region’s foreign debt is the nature of its creditors. First particularity is that the bilateral part although declining is still a full quarter of the total. At one time largely preponderant, the Paris club members have seen their part dwindle to the advantage of, in particular, China which has become the principal creditor for the region. The multilateral part has remained fairly stable, varying between 36% and 42% over the period, with the IMF continuing to be well involved.

The second particularity is the part in bonds. Although increasing, it has still not come to the levels of the rest of the World (see other parts). There are two elements that explain this: a number of these countries are low income countries and the rating accorded by the notation agencies very often makes their borrowing conditions on the financial markets prohibitive. Those countries that do manage to borrow on the financial markets do so at high interest and costs, around 5.75 %, plus risk premiums.

Table 1: Evolution of the public external debt of Sub-Saharan African countries by category of creditors between 2000 and 2019, in absolute and relative value

Eighty-nine percent of the countries in the region are economically dependent on commodity exports;15 eighteen countries are dependent on the export of agricultural products; eight are dependent on fossil fuel exports; seventeen on mining ores. Some, such as Ghana, which exports cacao and gold, are exporters in several categories.

In the period between 1st March 2020 and 1st January 2021,17 countries of the region had their currencies sharply depreciated against the U.S. dollar and the euro, i.e. the main foreign exchange reserves. True, twenty-five currencies did gain value against the dollar but mostly, because of their fixed parity rates (notably the 15 countries of the Franc CFA zones, that gain no real advantage from their situation).18 The others depreciated between 0.04% and 78.05 %. The average depreciation was 11.5 %. Against the euro and not counting fixed parities, except for Liberian money which gained 7.90%, the currencies lost between 4.95% and 80.37%, on average 16.76 %.

It should also be noted that under pressure from the IMF, and its creditors in order to see, after 25 years, the HIPC initiative implemented, Sudan devalued its currency on 21 February 2021. By aligning the Sudanese pound to the black market rate, reducing its value from 55 pounds for 1 U.S. dollar to 375 pounds for 1 U.S. dollar, Sudan again bowed to its creditors and the IMF. This is another example of the political blackmail inherent in the debt system. This devaluation sounds like another blow to the people, who will see the cost of servicing the debt rise, as well as the prices of a range of essential imported foodstuffs.19 It was the high cost of bread that started the popular movement that eventually led to the overthrow of President Omar El Béchir on 11 April 2019.

Graph 5. Debt service for DCs in the Sub-Saharan Africa region (US$ billion))

Sub-Saharan African countries’ foreign public debt has very much increased. The current worldwide economic crisis makes it ever more difficult for these countries, many of which are in situations of overindebtedness or already in default, to continue on established debt repayment schedules. The latest payment default country is Zambia in November 2020.

Even if, according to official data,22 the region seems to be less touched than elsewhere by the COVID-19 pandemic, the figures are rising steeply, aggravated by the South-African variant and the lack of vaccines.23 The region is badly hit by other diseases such as malaria, tuberculosis, VIH, diarrheal diseases, and, cases of Ebola have again been identified in Guinea and Congo (Democratic Republic).24

In a region where health spending and human development levels are in dramatic condition, even compared to other developing countries,25 there is a stronger case than ever for unilateral suspensions of debt payments based on arguments recognized in international law, such as state of necessity and fundamental change of circumstances. This is a sine qua non condition for urgently reallocating public expenditure and creating the means to relieve some consequences of the pandemic. Such suspensions of payments must spur governments to take further steps to liberate human development, namely to move away from the neo-liberal framework while repudiating debts identified, through a process of citizen debt auditing, as illegitimate.

Further articles in this series will examine the tendencies of the debt burden in other regions of the global South. Translated by Snake Arbusto, Vicki Briault, Mike Krolikowski and Christine Pagnoulle (CADTM)