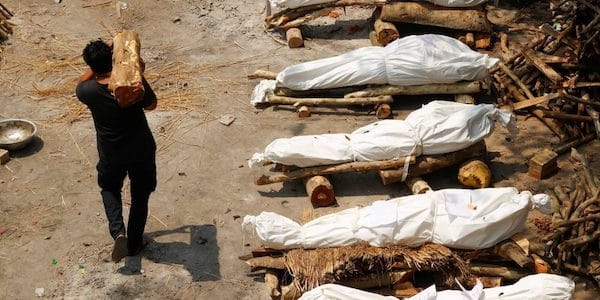 A man carrying wood walks past the funeral pyres of those who died from the coronavirus disease (COVID-19), during a mass cremation, at a crematorium in New Delhi, India April 26, 2021. Photo: Reuters/Adnan Abidi

The numbers keep rising. Daily counts of those afflicted and those dying are matched with images of horrifying suffering: of desperate scrambles for hospital beds, the dire need for oxygen, mass cremation without the rituals and respect for the dead, and soul-shattering public mourning by countless bereaved. As a nation, we watch with helplessness and consider the pandemic to be the culprit that has wrecked our celebration of having beaten it and is now despoiling our international reputation to be the next superpower.

In what should be a collective and mass grieving for the deaths of our citizens–deaths that were unwarranted, a result of the government’s malignant neglect–is also the time to reckon with some deeper truths; that these pandemic-marked deaths were in the making long before COVID-19 struck us in early 2020.

For three decades now, since the heralding of neo-liberalism, a rhetoric of open and free markets, less government and less regulation, more private players and entrepreneurs, etc., has been concomitant with the slow death of key public institutions. Over the past six years, this approach has become celebratory and public institutions that should be serving the most disadvantaged citizens have become rare or defunct and many public servants, who have gained valuable experience and expertise in public management, have found revolving doors to lucrative, private, post-retirement careers.

As the sociologist Satish Deshpande observed astutely, the newly “imagined economy” of liberalised India meant that even those who were once beneficiaries of the public sector have sought to ‘kick the (public) ladder’ that made possible their own upward mobility. These trends have now snowballed, under the current dispensation’s blatant crony capitalism, to shrink all public institutions and most are now skeleton structures either unable to fulfil their mandate or tottering towards their final death knell.

Few public institutions have been subject to erosion like those of the health sector, its institutions, systems and services. Funding for the public health sector, one of the lowest in the world, has neither factored in a growing population, the varied and complex health burdens, or even considered the right to good health to be a fundamental right.

Debates on the need to expand the public medical education system have often fallen on deaf ears and health entrepreneurs have been provided open grounds with which a largely unaccountable nexus between private medical colleges and a ‘health industry’ has grown. 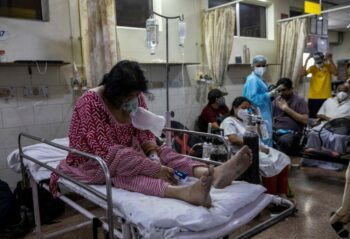 A patient suffering from the coronavirus disease (COVID-19) receives treatment inside the casualty ward at a hospital in New Delhi, India, May 1, 2021. Photo: Reuters/Danish Siddiqui

Similarly, Bills to regulate the private hospital industry and proposals to institute alternative medical courses such as the three-years MBBS, or to make rural medical service compulsory have all faced intense contestations. Promotion of the AYUSH (Ayurveda, Unani, Siddha and Homeopathy) systems through government legitimation has not seen the professionalisation and expansion of these systems and they cannot stretch themselves to address emergencies, surgeries, and situations such as pandemics.

The deaths during this intense pandemic have become a spectacle and have invoked much and deserved public hue and cry. But, in the vast tracts of rural and mofussil India, the absence of even basic health services sees many tragedies on a daily basis; deaths from neglect of even simple ailments, deaths from misinformation, from delayed treatment, and from quacks who seek to fill the need for a doctor’s touch.

That public health institutions are viable, required and feasible is represented in the case of some of the stellar public health institutions that the country had. A few years ago, we admitted a nine-year-old village girl, suffering from the debilitating and fatal disease of subacute encephalitis to the National Institute of Mental Health and Neurological diseases in Bengaluru. A BPL card, and nominal charges, entitled the family to excellent treatment that was delivered by a team of professional and compassionate doctors. Their treatment and advice were matched by an efficient administration system that provided subsidised food and lodging for the caretaking family.

What was evident was that a large health system that catered to the most disadvantaged was made possible by a larger support system of adequate budget allocation, administrative support and dedicated doctors. What this functioning and effective system showed was that the new, popular terms of privatised health economics of cost-recovery, specialist fees, overhead costs, returns to beds, etc., were not key to delivering good and effective health facilities.

The domain of education is another that has been consistently knocked down to allow for a privatised system. From the 1970s when approximately 90% of schools were government-run, there are now only about 70% of schools that rely on and are administered by the government. The expansion of the private schooling system has not assured entry to all, instead, it has initiated and strengthened a highly differentiated system in which class and caste differences are being reproduced.

Far from education being the leveller in which an egalitarian society and a democratic polity can be fostered, we have nine types of school systems that cater to the highly varied class and caste hierarchies. Even the passage of the Right to Education Act has not encouraged the promotion of better quality of government schools and schooling and the spread of private schools in even rural areas has fragmented communities.

Government schools now cater primarily to scheduled caste/tribe and disadvantaged classes while most of the rural landed and higher castes send their children to private and preferably English medium schools. Instead of elementary education being the foundation on which all children of a community can come together, the differentiated education system enhances the existing divides and differences and denies equality and quality of educational opportunity.

Growing income differences have fed into dismantling even the limited but established common schooling systems, such as the Central Schools, in which children from all classes of a public sector were entitled to study. The Sixth Pay Commission salaries buoyed the disposable incomes of professionals even in the government sectors and many professionals, who themselves attended such Central Schools, now seek to realise international ambitions for their children.

As a result, even award-winning Central Schools in some of the metropolises are now seeing an exodus of children into the new private ‘public’ and ‘international schools’. The rise of new private universities has come at a cost to public universities where an exodus of faculty, who had built their careers in these public institutions but are attracted to the enhanced salaries and perks of the private universities, has meant a hollowing out of these institutions.

Criticism of these private universities as the new ‘agraharas’, defined by students’ ability to high fees and therefore exclusive to the elite, is now buttressed by incidents in which the rights of faculty to critique the state is being curtailed by the management of these universities.

Economic legitimation to privatize, seek only profits, and not be accessible to a majority of citizens is evident also in the transportation and housing sectors. Parallel and differentiated systems that function on an assumption that ability to pay is the only criteria for access, use and service runs throughout many of our sectors.

The only public sector which has benefitted enormously in this period of neo-liberal privatisation has been the defence industry. Built more around the rhetoric of a rabid nationalism that flexes its muscles against all the neighbouring countries and used both symbolically and in media promotion as manifestations of a strong leader, a strong party and a strong state, the expenses of even the defence sector do not serve public interests.

‘Save Vizag Steel Plant’ rally against the privatisation of the Vizag steel plant in Visakhapatnam. Photo: PTI

That the Rafale planes were linked to cushioning one of the Ambanis and at the cost of degrading the capabilities of the public sector defence factory, the Hindustan Aeronautics Limited (HAL), are issues that are not recognised by the bhakts. Mass silence over the blatant misuse of enormous public funds has only strengthened arbitrary and unaccountable expenditures which have been at the cost of genuine public goods and needs.

Privatisation as the mantra of the ‘New India’ has meant a withdrawal of elites and then middle classes from mass public systems which in turn have largely become sites of neglect, apathy, and maladministration. Such differentiated systems, in a supposedly democratic system, erodes the possibility of fostering equal social and economic capabilities.

Inequality via the caste system was our inherited social ideology, but inequality fostered and nurtured by a state and citizens will mean that both the citizens and the state will have to pay a high price for this. Instead, we have the option of seeing and constituting public institutions that can be restitutive of the rights of all citizens, levellers that undo generational inequalities and which act as levers that challenge the reproduction of multiple disadvantages.

At the end of the Second World War, as a battered Britain scrambled to regain its economy and heal the trauma of its citizens, Sir William Beveridge (born in then British India to a colonial administrator) instituted a public health system that led to the establishment of the National Health System–now a stellar medical system where high-quality medical services are provided to all citizens by the state.

In these times of COVID-19 pandemic, the loss of our citizens must be the banner under which new public systems, serving the masses, providing efficient, quality and affordable services are the need of the hour.

In reclaiming and re-asserting our rights and the need for public systems, we must challenge the current definition of what a public good and public institutions are. It is not the statue of Sardar Vallabhai Patel nor the new Central Vista being planned in Delhi. In contesting this, we must assert that now is the time to initiate a mass call for the state to establish a public health system that will serve all citizens and be a memorial to all these undeserved deaths by negligence.

The pandemic and its chaos and misery have generated sharply skewed class-based responses. With their usual sense of privilege and impunity, the rich and upper classes have triggered a black market in all the medical supplies related to COVID-19 treatment. Among the disadvantaged classes, an unusual sense of cynicism and indifference has set in.

One rural resident, when asked why he was unmasked and traveling around during the peak of the pandemic, retorted that COVID-19 was the “illness of the hi-fi people” and since he was a “working man” and rural, he was immune to the virus.

Such are the constructions of citizens fostered by divisive, uneven and unequal opportunities that a collective consciousness at a time of shared sorrows is not possible. In the long-term, when we must come to a collective and responsible reckoning with what our divisive systems have entailed, we must seek to first forge an everyday sense of shared resources, institutions, services and goods. Only then can a decent society and a democratic nation be possible.

A.R.Vasavi, a Social Anthropologist, is with the Punarchith Collective and is based in Karnataka.