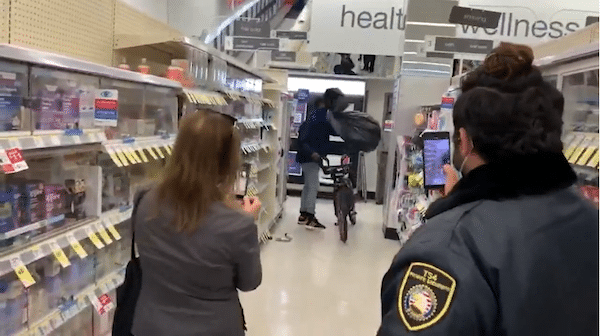 Urban crime is the golden child of local media, as recent FAIR coverage (6/21/21) has shown. But as FAIR’s Julie Hollar recently noted, the amount of attention given to a topic does not always reflect the seriousness of the situation. 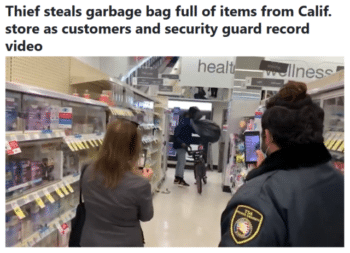 The original KGO report (6/15/21) that sparked hundreds of followup stories.

An alleged “crime surge” at Walgreens drugstores in San Francisco was a hot topic for Bay Area news outlets in the early months of 2021. When Lyanne Melendez, a reporter for the ABC-owned KGO-TV in San Francisco, tweeted out a cellphone video of a brazen shoplifter, it elevated this narrative into a nationwide story. The video purports to show a man apparently filling a garbage bag with items before riding a bicycle out of the store, as two people, one of whom seems to be a store security guard, record him.

FAIR identified 309 published pieces on the 21-second video, using a combination of Nexis and Google advanced search to find every article published by a news outlet, from the video’s publication on June 14 to July 12—a 28-day timeframe.

Compare this to another Walgreens-related theft story: the November settlement of a wage theft and labor law violation class-action lawsuit against Walgreens, filed by employees in California for $4.5 million.

A multimillion-dollar settlement coming after a two-year legal struggle, this should have been a national news story, not to mention a major topic in local California outlets. But FAIR was unable to find a single general news outlet that covered the settlement, looking from November 2020 to July 2021, using the same search parameters as the aforementioned shoplifting video.

Plaintiff alleged that defendants rounded down employees’ hours on their time cards, required employees to pass through security checks before and after their shift without compensating them for time worked, and failed to pay premium wages to employees who were denied legally required meal breaks.

While San Francisco admittedly has a higher crime rate compared to many major cities in the United States, this rate has been decreasing, even amidst a global pandemic (San Francisco Chronicle, 4/2/21): 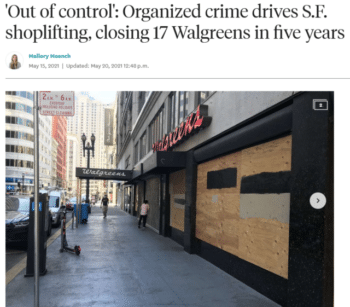 Kyle Barry in the Appeal (6/22/21) noted that the San Francisco Chronicle (5/20/21) failed to point out that “Walgreens announced in 2019 that it was closing hundreds of stores nationwide as a cost-saving measure.”

But not only is this context consistently brushed over in news reports, much of the coverage connected to this video could lead one to believe the complete opposite, as in the San Francisco Chronicle (5/20/21):

For years, John Susoeff walked from his home two blocks to the Walgreens at Bush and Larkin streets–to pick up prescriptions for himself and for less mobile neighbors, to get a new phone card, and to snag senior discounts the first Tuesday of the month.

That changed in March when the Walgreens, ravaged by shoplifting, closed. Susoeff, 77, who sometimes uses a cane, now goes six blocks for medication and other necessities.

Much of the narrative around the story of San Francisco’s crimes relates back to 2014, when California voters approved Proposition 47. Prop 47 reclassified several nonviolent offenses as misdemeanors rather than felonies. This included any instances of shoplifting at or below $950.

DataSF’s crime database includes the June 14 incident, listing it as “Theft, Shoplifting, $200–$950”—meaning that the maximum possible cost of the merchandise allegedly stolen was $950.

While basic arithmetic would indicate that $4.5 million is greater than $950, media have demonstrated that the question isn’t how much is being stolen, but who it is being stolen from.

Obviously, the shoplifting video is supposed to represent multiple examples of retail theft, to boost awareness about shoplifting as a larger issue. But the wage theft settlement is also one example of a widespread issue: Employers stealing from their workers is a $15 billion a year problem that gets little attention.

San Francisco is a city that falls far short in caring for the homeless population, with pervasive poverty, particularly among people of color. In that context, to treat an individual stealing a few hundred dollars from a corporation worth $150 billion as infinitely more newsworthy than that same company stealing millions from its employees is to enlist the media on the well-funded side of the class war.

Steven Keehner is a Stony Brook University student and a writer from Long Island, New York. Since May 2021, he has been an intern at FAIR. You can following him on Twitter or Instagram, or visit his website, stevenkeehner.com.