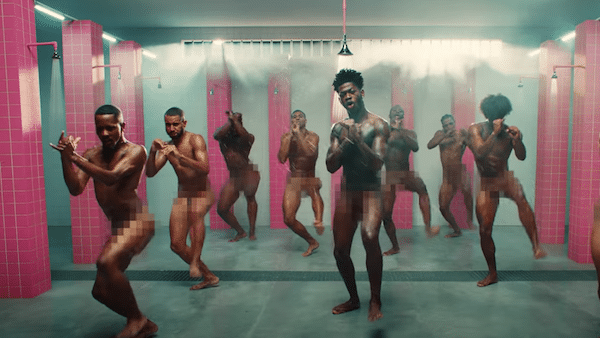 Congratulations to Lil Nas X on the birth of his “Industry Baby.”

On Thursday night, the much-discussed-and-debated artist dropped the music video for “Industry Baby” after his well-placed and strategic teaser referencing his controversial “Satan shoes” court case.

In addition to raving about the Jack Harlow feature, choreographer Sean Bankhead having a moment and that hot man who looks a lot like Jason Momoa, the video had people’s purist panties in a bunch, predictably.

nigga i literally went to hell and twerked on satan but gay prison is where you draw the line ?! https://t.co/3NLR6GPt0o

Meanwhile—as is Lil Nas X’s point—the video served as an expression of freedom and inspiration for young queer Black boys (and even older queer Black men whose true selves and voices were oppressed and silenced).

Me literally every time Lil Nas X releases something… pic.twitter.com/qVFgwZyxgk

Thinking about my queer black students. Lil Nas X is all they talked about in class, because he was someone that highlighted their struggles. He’s important. https://t.co/1NPoK9OPil

We all know by now that Lil Nas X is an effective marketing genius troll, but there’s also some meat to his madness.

In partnership with The Bail Project, a “national nonprofit organization designed to combat mass incarceration by disrupting the money bail system one person at a time,” Lil Nas accompanied his music video debut with the launch of a bail fund. The fund has raised over $17,000 at the time of this blog’s posting.

“Music is the way I fight for liberation,” Lil Nas X wrote in the caption.

But true freedom requires change in how the criminal justice system works, starting with cash bail. I know the pain that incarceration brings to a family, and I know the disproportionate impact that cash bail has on Black Americans. There are so many stories that call on us to take action, and I invite you to join me in this important civil right issue.

Yes! Get into this mutual aid energy! Just hit the “Donate” button right under the video. This especially goes out to the bigots who are adding to his multimillion view tally by obsessively hate-watching to mask your own repression! Besides, it’ll be more productive than harassing a young and talented Black queer guy who is living in his truth due to some faux-concern about the children (some of whom are living freer and happier lives because of him).

In the song, Lil Nas X rap-croons, “You was never really rooting for me anyway,” reiterating that he has no plans to stand down for the benefit of his haters, homophobic or otherwise. He will continue to showcase himself, unapologetically and without respectability politics.

“I actually 100% do feel stronger,” he recently told Apple Music.

I feel more powerful to be able to step into my actual self and be me on these records and still have them pop out feeling and sounding so great. And it’s me. It is actually me. Like, I’m not like rapping about somebody else’s life. Like I’m not singing about somebody else’s situation. Like this is me and it feels so much better knowing that, you know?

This is Lil Nas X… and he’s here to stay. So, if you’re a hater who can’t keep his name out of your mouth… call him by his name.